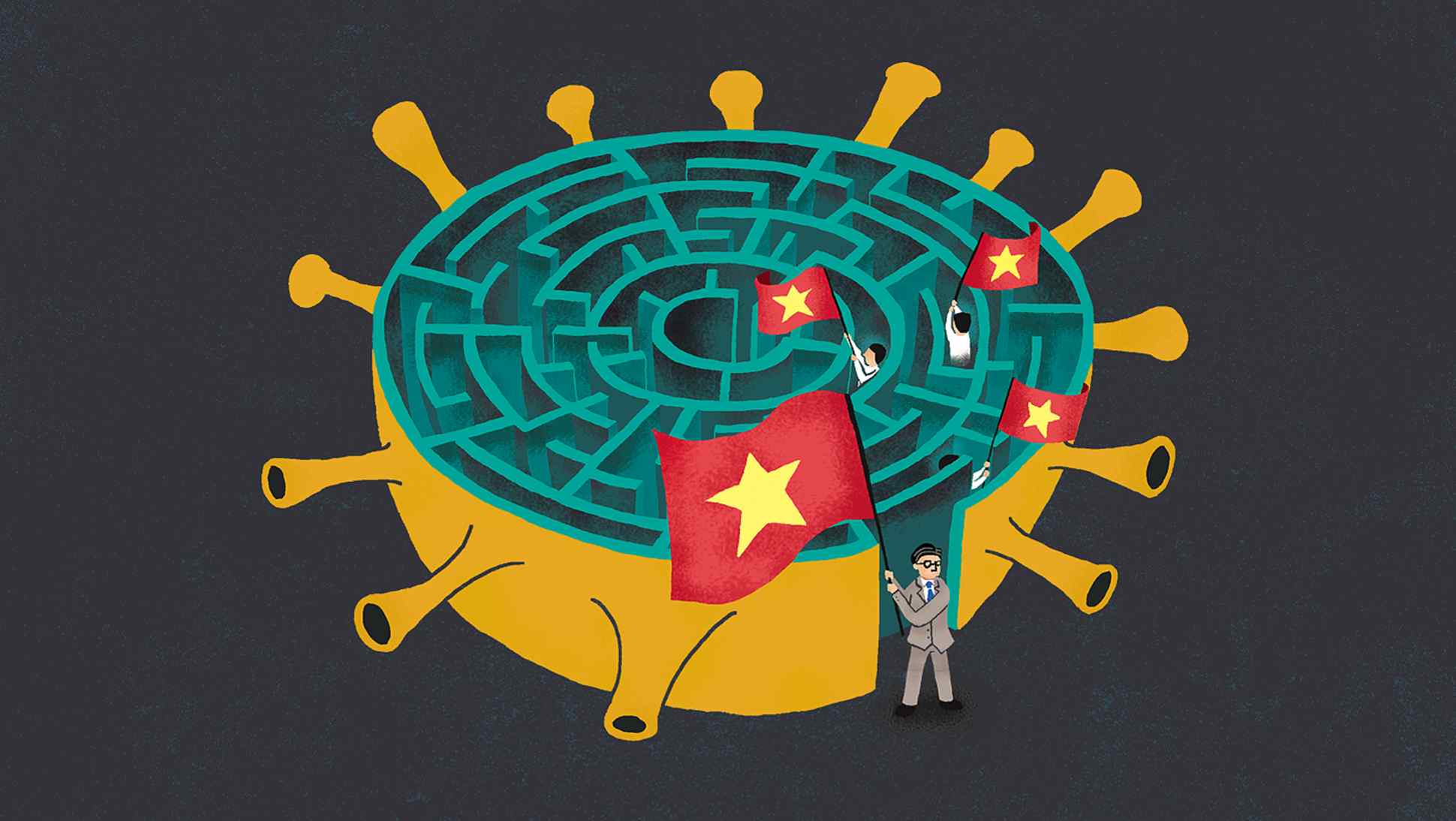 HANOI -- Dressed in a white shirt with no tie and no face mask, Vietnamese Prime Minister Nguyen Xuan Phuc looked confident and relieved when he addressed his cabinet last Wednesday. He had reason to be: It had been days since the country recorded even a single new coronavirus case.

Phuc informed them it was "time to gradually ease restrictions" imposed to contain the outbreak. Though he stressed that "tonight is not the time to go out to celebrate," it was the closest thing to a declaration of victory he could have hoped for -- just in time for Liberation Day this Thursday, which celebrates the end of the Vietnam War, and well ahead of next January's Communist Party convention, which will confirm a new leadership lineup.

Domestic flights were allowed to resume on Thursday, while strict social distancing measures were lifted in most areas except some districts of Hanoi. Yet even if Vietnam really does have the virus under control with just 270 cases and no deaths as of Monday morning, the pandemic has upended the government's economic and diplomatic plans for 2020.

The country faces some major questions, including how to revive growth and who, exactly, will occupy the top four most powerful posts from 2021 to 2026. Or will there be four leaders at all?

The answers could have profound effects on Vietnam's economic strategy, not to mention its relations with China and the U.S. Since the death of founding father Ho Chi Minh in 1969, the Communist Party has avoided a concentration of power by dividing the leadership into "Four Pillars." In practice, the most powerful position is general secretary, followed by prime minster, president and chair of the National Assembly. But health issues have upset this balance in recent years.

General Secretary Nguyen Phu Trong, 76, has doubled as president since October 2018, following the sudden death of President Tran Dai Quang at 61. This was seen as a quick fix at first, but it created a situation similar to China, where Xi Jinping is both president and general secretary of the ruling party.

Trong has had his own health problems -- diplomatic sources say he suffered a mild stroke in April 2019. He has receded from the spotlight while Prime Minister Phuc has gained prominence as Vietnam's global face, meeting with leaders from the U.S., Russia, China, Japan and India.

Now, the race is underway to determine who will stay, who will go, who will rise and who will fall.

Some pundits think Trong is far from finished despite his age and ailments. He may well retain his two posts.

In January, Trong set new regulations on leadership changes, ensuring the door is open for Four Pillars positions to be held by leaders over the traditional age limit of 65. "Trong's new regulation on leadership is abstract, vague, and could be understood to be intentional, especially regarding the two important posts of party general secretary and prime minister," Duong Quoc Chinh, a Hanoi-based political expert, told the Nikkei Asian Review.

Reports that Trong attended a large meeting of Politburo members and other high-ranking officials to review the COVID-19 situation on Thursday only fueled speculation. He had delivered just one public message on the pandemic, writing on March 30 that Vietnam should "partner with countries around the world and win in the battle against coronavirus."

Some say Trong's continued presence would contribute to political stability. But it would also mean the Four Pillars are still reduced to three.

If he retires, there are a few candidates who might replace him as party chief. The 65-year-old Phuc is one. Another is Tran Quoc Vuong, 67, the Central Committee Secretariat executive secretary said to be Trong's right-hand man. And then there is Nguyen Thi Kim Ngan, 66, the incumbent chairwoman of the National Assembly -- the first woman to lead the national parliament.

"Vietnam is not yet ready to have a female party chief," said Le Hong Hiep, a fellow at Singapore's ISEAS-Yusof Ishak Institute. So the candidates with the "most potential" are Vuong and Phuc.

One expert, speaking on condition of anonymity, said Vuong is the most likely option. "His profile is quite clean, and he has been working as Trong's aide" since the rumored stroke.

Another disagreed, saying, "Phuc will be the strongest candidate, as he has been acting as the leader of this country, dealing with both domestic and international affairs since last April."

The importance of geography cannot be discounted. Wartime animosity between the northern capital, Hanoi, and the southern commercial hub, Ho Chi Minh City, lingers. Politicians from the north, which won the war over the south, are favored. The top general secretary position has always gone to someone from the north or center of the country.

Regardless of origin, the public will be looking for clues on all candidates' stances toward China. Despite the countries' shared Communist ideology, anti-China sentiment runs deep in Vietnam, stoked by a history of conflicts across their 1,200 km border and persistent territorial friction in the South China Sea.

If Hanoi's objective is to keep Beijing at arm's length and move closer to Washington, some say Deputy Prime Minister and Foreign Affairs Minister Pham Binh Minh might be the man for the prime minister's job, or perhaps president. Minh comes from the north, which is perceived to lean toward China, but is fluent in English and holds a master's degree in law and diplomacy from Tufts University in the U.S.

For president, meanwhile, there is a chance Phuc could slide over, or Ho Chi Minh City party chief Nguyen Thien Nhan could emerge as a candidate from the south. Experts say another woman might succeed either Phuc or Ngan in the National Assembly.

Whoever emerges in the top tier next year will have their hands full undoing the damage from a virus-marred 2020.

Health-wise, the country of 96 million appears to be virtually unscathed, if the numbers are to be believed. The government was quick to act, stopping all flights to and from mainland China on Feb. 1, and closing schools on Feb. 3.

While neighbors like Indonesia and Singapore have seen infections approach or exceed 10,000, Vietnam seems to have stopped the virus in its tracks with strict measures only a Communist one-party state could impose. The government clamped down on domestic travel, issued sweeping stay-at-home orders, shuttered businesses and enforced tight contact tracing.

All this paid off when Vietnam became the first Southeast Asian country to start lifting restrictions -- just as it was the first to declare SARS contained in 2003.

In other ways, however, Vietnam has not been spared the ravages of COVID-19.

Gross domestic product grew only 3.82% in the first quarter, well off the 6.97% pace in October-December. The latest International Monetary Fund projections, released on April 14, suggest the economy will expand only 2.7% this year, after two straight years of reaching 7%. Negative growth cannot be ruled out.

The government may also rue missed diplomatic opportunities. As this year's chair of the Association of Southeast Asian Nations, Vietnam was set to host a summit in Danang this month, but it has been postponed until at least the end of June. Hanoi was eager to boost ASEAN cooperation as a buffer against China and promote its own promising economy on the international stage, but these goals will have to wait.

Prime Minister Phuc is certainly not waiting to push a vision for recovery and shore up his political position. At an online meeting of ministers and local leaders on April 10, he insisted Vietnam has a bright future and is primed for a fast recovery once the pandemic runs its course. He called on local governments to help attract investment from foreign manufacturers -- likely hinting at an opportunity to snap up money from global companies shifting production out of China.

Multinationals have already moved in, most notably South Korea's Samsung Electronics, which makes a little over half the world's smartphones in Vietnam and accounts for about 25% of the country's total exports. Local officials who lure other big investors could conceivably set themselves up for higher office.

"There are two major concerns, among many, that currently preoccupy [Communist Party] leaders," said Carl Thayer, emeritus professor at the University of New South Wales in Australia. "The first is the issue of how to sustain current economic growth that is equitable across society and protects the environment."

The second, he said, "relates to the possibility of tensions, arms race, and armed conflict in the South China Sea, Taiwan Strait, East China Sea and Korean Peninsula. All of these conflicts are likely to involve China."

Vietnam's leaders will be pondering these challenges as they seek a smooth leadership transition -- while keeping an eye out for a coronavirus comeback. 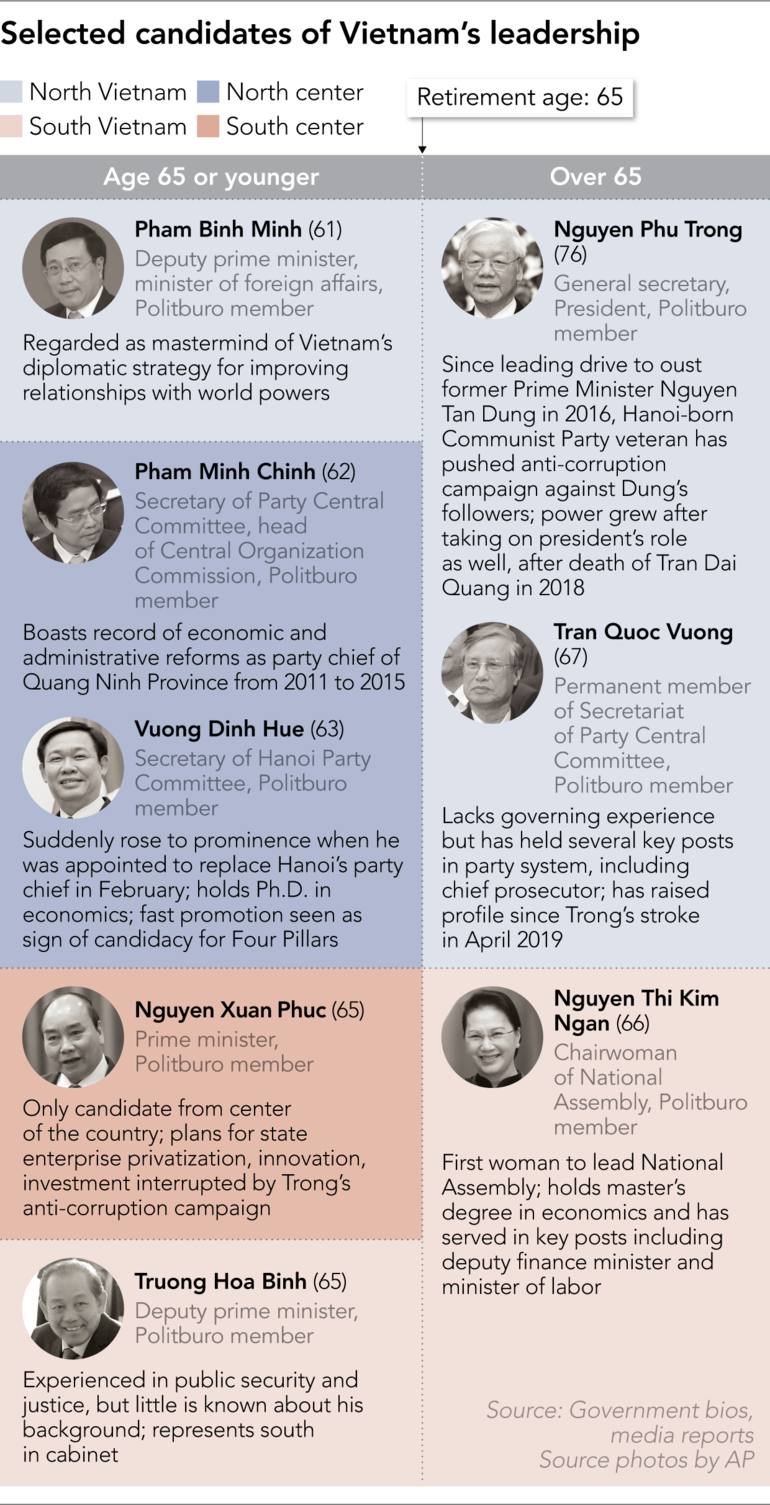