General Secretary and President Nguyen Phu Trong, right, and Prime Minister Nguyen Xuan Phuc, left, are preparing for the Communist Party of Vietnam's next congress. The meeting will decide the leadership lineup and goals for the next five years.   © Nikkei montage/Source photos by Getty Images
Asia Insight

Vietnam's Communists brace for next 5 years after big 2020

Party has COVID, Big Tech and dissent under control; can it keep economy humming?

HANOI -- Vietnam's leaders are among the few who can call 2020 a success.

Now they aim to carry the country's momentum into 2021, when a crucial political meeting will set a course for the next five years -- and potentially further cement their grip on the young, growing and economically vibrant nation of nearly 100 million people.

Vietnam had plenty to celebrate this year. Its response to COVID-19 has limited total recorded infections to around 1,400, making it the envy of the world. It chaired the Association of Southeast Asian Nations for the first time in a decade, hosting the 10-country bloc's virtual summit in November. And immediately afterward, it hosted a historic online signing ceremony for the Regional Comprehensive Economic Partnership, or RCEP -- the world's biggest trade pact.

But the excitement created by these marquee events is over, and the Communist Party of Vietnam is focused on domestic politics -- and anyone who might rock the boat -- as its 13th National Congress nears, possibly in January.

The congress is the country's most important event, held every five years to choose new leadership and set economic goals.

"This year has played an important role in achieving progress of five-year targets set at the 12th congress," Nguyen Phu Trong, the country's de facto leader, told an army conference on Dec. 7 in Hanoi, referring to the last meeting in January 2016.

"While the Vietnamese economy is basically stable, the party has gained more trust from citizens thanks to positive results from the anti-corruption campaign and reshuffle of the party," said the 76-year-old Trong, who is party general secretary, as well as Vietnam's president and controls the armed forces as secretary of the Central Military Commission. At the 2016 congress, Trong promoted then-Deputy Prime Minister Nguyen Xuan Phuc to prime minister, forcing then-Prime Minister Nguyen Tan Dung to retire from politics. Dung, who had served for 10 years, was seen as one of the most significant leaders since Le Duan, the direct successor of Ho Chi Minh, founder of the party in 1930 and still revered as "Uncle Ho."

Following the death of President Tran Dai Quang in 2018, Trong assumed his post and has steered politics, the economy and diplomacy in tandem with Phuc.

Trong and the leadership are now claiming victories on three fronts -- an online crackdown targeting an increasingly social media savvy general public; an internal party struggle against dissent; and containment of the coronavirus.

When it comes to the first battle, the CPV has long worked to suppress words and deeds that could shake one-party rule, and the authorities have strengthened their internet surveillance this year.

"My Facebook account may be suspended, probably because the party convention is nearing," Bui Thanh Hieu, a blogger widely known in Vietnam as a radical critic of the leadership, said in a post on Sept. 4. Although Hieu has been writing fewer anti-CPV messages, Facebook now shows a warning in Vietnamese on his account that it will be restricted if prohibited activity continues. After repeated negotiations, Facebook has agreed to comply with 95% of official requests for deletion of "malicious" messages, up from 10%, he said, adding that YouTube has raised the ratio to 90% from 50%.

The ratios Hung mentioned match those in transparency reports released by the two American companies.

Unlike China, Vietnam has not blocked U.S. social media. The number of Vietnamese-language Facebook users reached 61 million in January 2020, according to "We are Social," a London-based social media agency. Indeed, Facebook and Google have spread so rapidly that Vietnam considers it extremely difficult to follow Beijing's model of blocking them in favor of domestic services.

But Hung insists the platforms comply with Vietnamese laws. "Facebook, Google and Apple do not pay taxes in Vietnam, though they chalk up billions of dollars in revenue," he said. 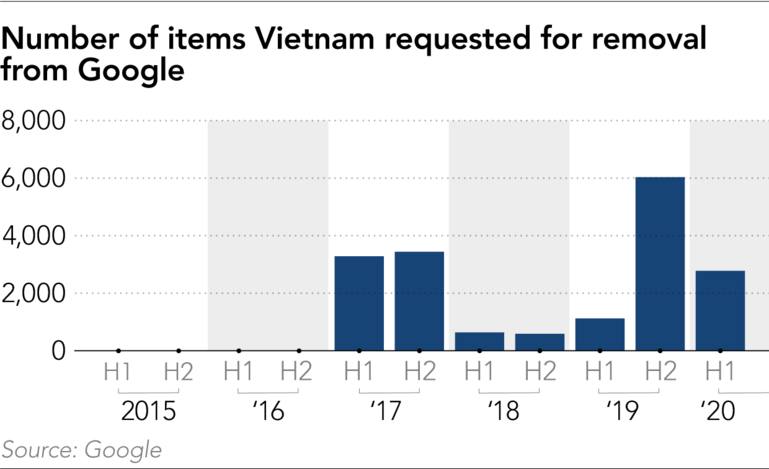 On the second front, Trong's CPV has been cracking down on corruption since 2016, but many see the effort as a means of stifling dissent within the party ranks.

Dung, the former prime minister, is credited with reforms that drove economic growth. But critics contend that widespread corruption during his tenure resulted in a slow but steady rise in popular discontent with the party. And although Trong dispatched Dung, loyalists remain in state-run businesses and other entities.

Trong also dismissed Ho Chi Minh City party chief Dinh La Thang in 2017 and eventually had him arrested. Huge losses at affiliates of PetroVietnam -- incurred when Thang was chairman of the national oil and gas company -- were the official reason, though his detention was reportedly related to alleged corruption. Either way, he was the first former Politburo member to be jailed and is currently serving a 30-year prison term. Crackdowns on alleged misconduct have intensified as the next congress approaches.

"Corruption has been gradually held in check, contributing to political stability," Trong told a meeting of the Central Steering Committee for anti-corruption on Dec. 12, speaking to around 700 assembled government officials and another 5,000 or so watching remotely.

A report detailed at the meeting showed that 131,000 CPV members and government officials had been disciplined since the committee was founded in 2013. Of that figure, 87,000 were punished after the 2016 party congress.

As for the third front -- the fight against the coronavirus -- Vietnam has clearly succeeded. COVID-19 has claimed 35 Vietnamese lives, far below many other countries. And the economy has continued to grow at a time when regional peers are contracting. The International Monetary Fund expects Vietnam's gross domestic product to expand 2.4% in 2020.

The government took thorough, even harsh, measures to contain the virus -- from contact tracing to disclosing the addresses of infected people and locking down affected areas. The CPV leadership has thus turned the COVID-19 crisis into a tailwind.

The country already had a breeze in its sails amid major changes in geopolitical, economic and business conditions since 2016, including the U.S.-China trade war. Vietnam achieved Southeast Asia's fastest growth and drew attention as an attractive investment destination in place of China and other markets.

Historically, the National Congress has led to major turning points.

At the sixth congress in 1986, the party adopted the doi moi policy of reform and opening to the world -- the spark for Vietnamese growth.

The five years following the seventh congress in 1991 were pivotal as well. That year, Vietnam normalized relations with China, severed as a result of their brief but bloody 1979 border war. Vietnam went on to establish ties with another former enemy, the U.S., in 1995, the same year it officially joined ASEAN. After the 10th National Congress in 2006, Hanoi attained a long-sought goal of joining the World Trade Organization in 2007. Samsung Electronics opened a mobile phone plant in Vietnam in 2009 and now produces half its global smartphone output in the country.

The 2006 congress is also notable for Dung's rise to prime minister.

Dung promoted trade liberalization -- including an economic partnership agreement with Japan -- and acceptance of foreign direct investment. A trade deal with the European Union, for which the groundwork was laid during Dung's tenure, took effect this past August.

But Dung paid a price for his reforms and apparent inability to check corruption. He had been widely expected to succeed Trong as general secretary at the 2016 congress. Instead, the party old guard opposed his promotion, Trong stayed on and Dung resigned.

Analysts wonder if the coming congress can propel Vietnam into its next growth phase.

But taking full advantage of these trends and continuing the success of the past five years -- both contingent on political stability -- may not be easy. Pressure from Washington, for starters, is building. Vietnam's surplus with the U.S. grew to $58 billion in the 12 months to June. In the first 10 months of 2020, Vietnam's surfeit trailed only those of China and Mexico. That led the U.S. Treasury Department to designate Vietnam as a currency manipulator last Thursday, in the final stretch of President Donald Trump term.

U.S. President-elect Joe Biden might "pose a challenge" for Vietnamese leaders in a different way, according to Duong Quoc Chinh, a political analyst in Hanoi. "Donald Trump has not shown much interest in the democratic movement in Vietnam and Hanoi did not face much diplomatic pressure from Washington," he said. "The situation could change under Biden's presidency."

The task of managing the relationship will fall to Vietnam's next leadership lineup.

In practice, the party general secretary wields the most power, followed by the prime minster, president and chair of the National Assembly. Given his age, speculation about Trong's future is rife, but there is no doubt he will influence the selections.

"Concerns mainly arise from the possibility of a change in the general secretary post," Chinh said. "Nguyen Phu Trong ... is an absolute loyalist to the communist regime, holding to the ideals of communism and is seen as quite clean."

If the party ends up with a general secretary who is less conservative and perhaps more tolerant of corruption, the overall leadership could become unstable, Chinh argued. There are larger questions of political stability to consider, too.

Vietnam's population is nearing 100 million with an average age just above 30. Hundreds of thousands of citizens have worked or are working overseas, exposing them and their families to a world of information. Many foreign observers wonder whether it is possible to maintain one-party rule and economic expansion as citizens' values grow more diverse.

"The Communist Party of Vietnam and the next leadership over the coming five years have to work on new policies that secure the 'rule of law' model and real freedom for people," Dang Tam Chanh, a Ho Chi Minh City-based political analyst, said of such concerns. "At least, the party must have vision, targets and real actions to lead the Vietnamese young generation to develop and improve their individual talents."

"Comrades, the air of joy and excitement is spreading across our country," Trong told the Dec. 7 army conference. "Let us make 2021 a better year than this year, to live up to the eternal honor as 'Uncle Ho's soldiers' and to the love and trust of the party, state and people."

But the lofty rhetoric coincides with tough measures.

The next day, Truong Chau Huu Danh, 38, a well-known Facebook user in Long An Province, was arrested for allegedly publishing posts against the state. His three-month detention is seen as the authorities' latest attempt to stifle dissent and ensure a smooth congress.