Indonesian President Joko Widodo has plans to launch the economy into the world's top 10, but now he is turning more inward. (© Nikkei montage/Source photo by Reuters)
Asia Insight

JAKARTA -- Indonesia's opposition is attacking President Joko Widodo where it hurts ahead of next April's general election.

They are taking to social media to allege he is rolling out the red carpet for Chinese workers to enter the country and snatch jobs away from locals. A theme song accompanying the #2019GantiPresiden (change the president in 2019) campaign takes a swipe at Widodo's "Work, work, work" motto:

"We used to live with no hardship, finding jobs was really easy
But now there is more unemployment, it is messy
Ten million jobs but not for us
'Work, work, work' -- it's foreign workers who work
The nation's children remain unemployed"

While Widodo is favored to beat opposition leader and former army general Prabowo Subianto, securing a second five-year term, he is taking no chances.

In many ways the leader commonly known as Jokowi is echoing his rival by pushing a more populist agenda. And the emerging-market sell-off pushing the Indonesian rupiah down to a level last seen during the Asian financial crisis in the late 1990s is also forcing him to take protectionist measures.

Widodo came into office as Indonesia's president four years ago with big plans to launch Southeast Asia's largest economy into the world's top 10. He pledged to loosen red tape, relax restrictions on foreign investment and upgrade the nation with a massive infrastructure push. By the second quarter of this year, the economy was growing at its fastest rate in four and a half years, and the government announced its "Making Indonesia 4.0" campaign to develop five key industries -- food and beverages, textiles, automobiles, chemicals and electronics.

But a combination of politics and the rupiah's nosedive has prompted an about-turn.

In August's draft budget for 2019, Widodo's government pledged to boost subsidies, up the pay of civil servants and double benefits to poor households. In recent months he has also moved to assert Indonesian control over the country's natural resources.

The government has earmarked 156.5 trillion rupiah, an increase of 66% from the original budget plan for this year, for energy-related subsidies. It is also raising support in non-energy fields, such as for agricultural fertilizers by 4.2%. A woman in her 30s who runs a travel agency in Jakarta is worried about the impact of the rupiah's fall on her business, which has grown on the back of an increasing number of Indonesians traveling overseas.

"We have to increase our prices," said the woman who asked not to be identified. "If this continues, we are afraid there will be a decreasing number of people traveling."

The archipelago country imports most of its fuel, and the government fixes gasoline and diesel prices. Even though state-owned energy giant Pertamina is suffering from the falling currency and higher oil prices, Widodo has had little choice but to increase subsidies to keep prices down.

Indonesia had the world's 16th largest economy last year, according to World Bank data. To get into the top 10, it would need to expand at least 60% more.

To speed up growth, which has been hovering around 5%, economists say the country needs to further remove investment restrictions, upgrade the manufacturing sector to produce more high-value products, and spend more on education to enhance the domestic workforce.

For now, all eyes are on the currency. The rupiah has been caught in the sell-off that has swept up Turkey, Argentina and South Africa. Current-account deficits since 2011 make the country more vulnerable to external shocks than regional peers such as Malaysia and Thailand, leading the rupiah to fall about 9% against the dollar this year. The currency decline has contributed to a fall of about 9% in the benchmark Jakarta Composite Index since the start of the year. Companies are revising growth targets and canceling plans for initial public offerings and bond issuances. It also does not help export-oriented industries as many companies have dollar-denominated debts.

To prop up the currency, Bank Indonesia has hiked its policy rate by a total of 125 basis points since May, and is expected to announce another increase in September. Between January and August, it used up $14 billion in reserves to intervene in the foreign exchange market. These moves struggled to stem the slide.

"The production cost has increased, but we can't increase the price because the customer will not buy it," Tasmaya said in a text message.

But the 39-year-old remains optimistic. "Hopefully whoever becomes president will move forward with the development and be able to accommodate all parties so that it will be conducive for the economy over the next five years." A cook prepares food at a Jakarta restaurant that gives free meals to people who recently changed U.S. dollars for Indonesian rupiah.   © Reuters

Finance Minister Sri Mulyani Indrawati in early September lashed out at market players in an attempt to stop the rupiah's fall.

She said authorities will closely monitor activity in the foreign exchange market and crack down on speculators, adding that only transactions for "legitimate needs" such as for imports of capital goods and paying dollar-denominated debts would be permitted.

Yudistira Ahadiat, an office worker in east Jakarta, said he has not felt the impact of the rupiah's fall on prices yet, but he is getting worried.

"Prices of goods will go up, but wages may not go up as well," Ahadiat, 34, said. "It's worrying because we don't know how long this will last. It may create instability -- economic instability, and political instability."

In addition to conventional steps, Widodo has announced a series of countermeasures to curb imports and narrow Indonesia's current-account deficit. 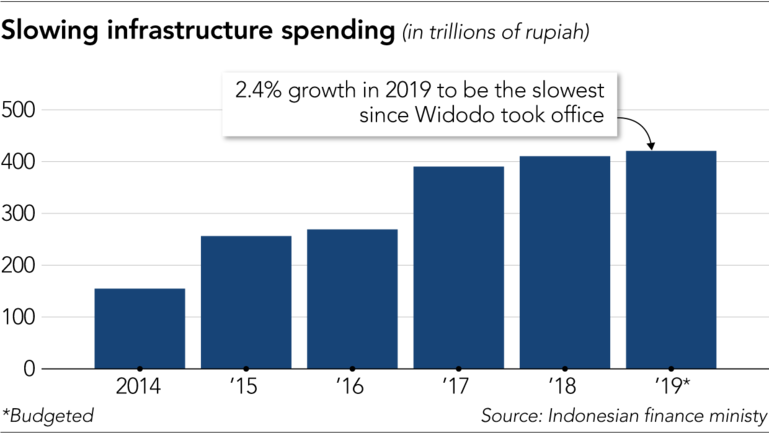 Higher subsidies for fuel mean there is less in the government's coffers for public works projects. Infrastructure spending is slated to grow by only 2.4% to 420.5 trillion rupiah next year -- the slowest increase since Widodo took office.

Ahadiat said that slowing down on infrastructure spending is the right move, adding that the projects were creating "piling debts."

Another blow to Widodo was a 12.9% fall in foreign direct investment in the second quarter, the first decline since 2010.

"Delays in investment have been caused by rupiah fluctuation, turmoil and capital outflows in emerging markets, and because we're entering a political year that will continue through next year," Indonesia's Investment Coordinating Board Chief Thomas Lembong said in August. "This creates uncertainties in the government's policies, rendering foreign investors to wait and see." Widodo and first lady Iriana cheer during the men's team badminton final at the Asian Games in Jakarta in August.   © Reuters

Economists, though, do not see the need for alarm.

Indonesia's economic fundamentals are much stronger than they were two decades ago, when the Asian crisis brought an end to former dictator Suharto's 31-year-rule. And they are in much better shape than Turkey's and Argentina's.

Inflation was at 2.13% in January-August, the ratio of debt to gross domestic product is much lower than many regional and international peers at 30%, and the economy grew 5.27% in the second quarter despite the increased global uncertainty.

"There is no need to panic. Panic is never good," Winfried Wicklein, country director at the Indonesia resident mission of the Asian Development Bank, told the Nikkei Asian Review. "The one thing we all recognize that the government and Bank Indonesia have demonstrated: very strong macrofiscal economic management. Compared with the previous crisis, Indonesia is much better prepared now."

Mira, a freelance content writer in the West Java city of Bekasi, said she is benefiting from the currency fall as she is paid in Singaporean dollars. But she is more concerned about escalating tensions between supporters of Widodo and opposition leader Subianto.

"I'm worried that riots will erupt," the 38-year-old said. "If you look at social media -- although there may be some kind of orchestration -- supporters are very vicious against each other. I'm worried some people will take advantage of the supporters' fanaticism and do something that will destroy the economy."

Subianto himself is attacking Widodo over the rising foreign debt, and is not missing a beat on the rupiah situation.

"Some people say large debts are no problem, but experts who understand know that debts are threatening the sovereignty of our nation," he said in a Sept. 1 speech. "Our economy is not growing. We're under threat of becoming a poor country forever."

While Widodo will make a strong case for his policies, the nearly 2 million views of the opposition song on YouTube show that his foes are unlikely to be silenced in the run-up to April's election.

Bobby Nugroho in Jakarta contributed to this story.