One case, involving SoftBank Group-linked companies, illustrates anew the potential for conflicts of interest when parents and subsidiaries are both listed. Meanwhile, a sell-off of Recruit Holdings shares, ostensibly triggered by a data leak scandal, highlights the lingering risks of cross-shareholding arrangements.

Together, these ongoing stories hint at some of the reasons Japan slipped down Asia's latest governance rankings, despite the country's much-hyped reform efforts.

"We believe the situation is deeply concerning." The official statement from Japanese office supplies vendor Askul on Aug. 20 was unusually combative against its controlling shareholder, Yahoo Japan, which owns a 45.1% stake. Askul's management alleges that Yahoo has breached a corporate governance guideline designed to protect the rights of minority investors in a listed entity controlled by another listed company, adopted by the Ministry of Economy, Trade and Industry in June. 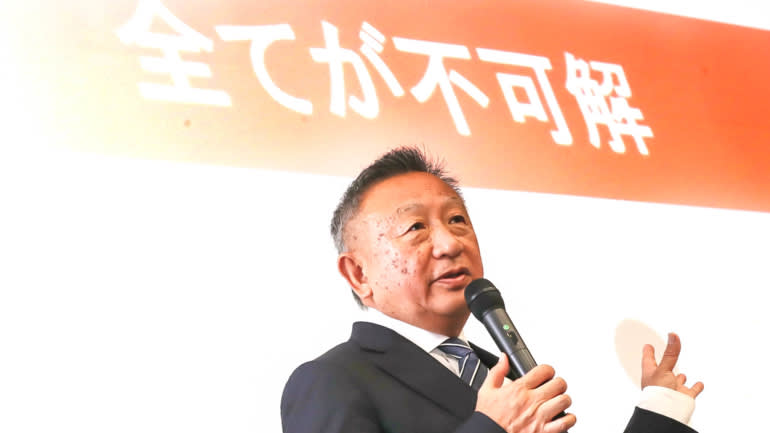 Askul's then-CEO Shoichiro Iwata speaks to reporters on July 18, after Yahoo said it would vote against his reappointment. The backdrop reads, "Everything is incomprehensible." (Photo by Kosaku Mimura)

At the center of the dispute is an online shopping site called Lohaco, which started as a joint project between Askul and Yahoo in 2012. Lohaco's revenue surged 23% to 51.3 billion yen ($486 million) in the fiscal year through May, but it still suffered a 9.2 billion yen operating loss. Unhappy with the performance, Yahoo made the rare move of voting out four board members at Askul's annual shareholders meeting in early August, including founding CEO Shoichiro Iwata and three independent external directors.

This went against the wishes of over 90% of minority shareholders, who backed the independent directors. So Askul argues that firing them contravened the governance guideline, which stresses that outside directors are crucial for protecting smaller stakeholders' rights when paired listings of parents and subsidiaries carry "structural conflict of interest risks."

Yahoo has been mum on the matter lately. But its own listed parent -- wireless provider SoftBank Corp., which owns 47.5% -- has been more vocal. Ken Miyauchi, CEO of the mobile company and a Yahoo director, told reporters that he "agrees" with Yahoo's move as "there was a bigger cause in growing the business."

Further up the chain of shareholdings, SoftBank Group Chairman and CEO Masayoshi Son, whose conglomerate owns 66.4% of SoftBank, took some by surprise with a statement saying he was "against the way Yahoo handled the case." Nevertheless, Son, who is also a Yahoo board member, added that he "respects" Yahoo's independence and "entrusts the decision" to its management. On another occasion, the billionaire argued that listed parent-subsidiary pairs are not unique to Japan. Data from Japan's industry ministry, however, shows 238 such pairs in Japan but far fewer elsewhere.

The parent companies in these pairs reap the benefits of being listed themselves while, in effect, controlling their subsidiaries without owning 100% stakes. Yet, there have long been debates and concerns over the risk that a parent might prioritize its own interests over those of a unit's minority shareholders. And there is some evidence to suggest the setup hampers subsidiaries' earning power. Even before the Askul-Yahoo battle, the issue had caught the attention of Prime Minister Shinzo Abe. "There is criticism from investors that the governance of listed subsidiaries has been left unaddressed," he noted at a March meeting of the Council on Investments for the Future. As one option, the council is thinking about requiring listed units to recruit at least half their boards externally. The Tokyo Stock Exchange is also preparing to institute a strict rule covering parent-subsidiary listings.

But this is not Japan's only unfinished governance business.

Recruit Holdings sent shock waves through the market last Wednesday, when the human resources conglomerate announced that 13 companies were selling up to 121.5 million of its shares, or 7.2% of the outstanding total, worth a staggering 402.5 billion yen at the time. Recruit simultaneously said it would buy back up to 30 million shares or 80 billion yen of its own stock. 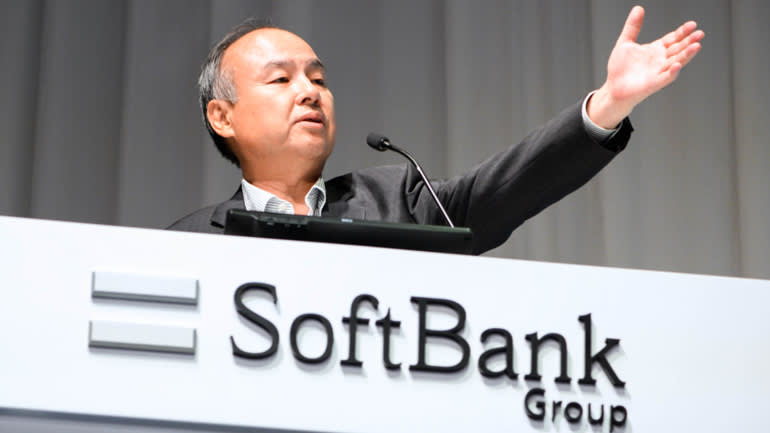 SoftBank CEO Masayoshi Son has said he is "against" the way Yahoo handled the Askul case but respects the internet company's independence. (Photo by Arisa Moriyama)

While the 13 big sellers did not explicitly disclose their reasons, their motivation is believed to have been a recent scandal over the sale of job-seekers' data without full consent. The massive offloading of shares is also consistent with a national drive to reduce cross-shareholdings -- when two companies hold each other's shares to maintain ties or ward off hostile takeover bids.

The following day, Recruit's share price plunged by 8% at one point. The 13 shareholders' collective decision to jump ship appears to have drawn attention to the big chunk of Recruit stock still held by other companies for "policy purposes" -- over 20%. Cross-shareholding arrangements account for most of this.

Other companies with high percentages of cross-held shares also fell that day, including telecom company KDDI, as investors grew anxious about a broader unwinding.

Around 30%, or 1.852 trillion yen, of KDDI shares were held by other companies for policy reasons as of the fiscal year ended March -- the most of any listed company in Japan, according to a Nikkei tally of financial statements. Kyocera, Toyota Motor and Chubu Electric Power were among the holders.

Recruit and Toyota had the next highest figures, at 1.213 trillion yen and 878.5 billion yen, respectively.

Cross-shareholding took hold in the 1960s, when Japan kicked off capital liberalization and businesses were looking to protect themselves against foreign acquisitions. The problem with these investments is that they do not necessarily encourage efficient use of funds. Cross-shareholders tend not to press management for better returns, compromising oversight.

The tide began to turn against the practice after the bubble economy collapsed in the early 1990s. Corporate Japan faced international pressure to break up the keiretsu -- sprawling groups of companies interlocked, in part, by mutual stakes.

The Corporate Governance Code, adopted by the Financial Services Agency and the Tokyo Stock Exchange in 2015, has been instrumental in accelerating the dismantling process. A 2018 revision, in particular, called on companies to reduce and explain their remaining cross-held shares.

The overall proportion of such shares has fallen dramatically, to 13.6% at the end of March from a peak of 50.8% in 1992, according to data released by the Nomura Institute of Capital Markets Research last Friday. "A company's stance on the unwinding of cross-shareholdings is regarded as a proxy variable of governance reform," said Masatoshi Kikuchi, chief equity strategist at Mizuho Securities. While the unwinding process can upset the supply-demand balance of shares in the short term, Scott Callon, CEO of Ichigo Asset Management, suggested that the general trend toward dismantling these arrangements signals "the improvement of governance in corporate Japan."

Yet, the amount of cross-held Japanese shares remains significant. The Nikkei study of financial reports found such shares were worth about 27 trillion yen, or around 5% of the Japanese market's total capitalization.

An international comparison by MSCI found that 72.0% of Japanese companies were cross-holding shares as of July 2018, far exceeding close neighbors Taiwan at 27.0% and South Korea at 19.4%.

Last Wednesday, the same day as Recruit's announcement, Toyota said it would form a new cross-shareholding relationship with Suzuki Motor. The auto giant is to spend about 96 billion yen to acquire 4.94% of Suzuki, while the smaller carmaker will purchase 48 billion yen worth of Toyota shares. Masayoshi Shirayanagi, Toyota's chief officer of external and public affairs, also told Nikkei that the company has no intention of unwinding paired parent-subsidiary listings. 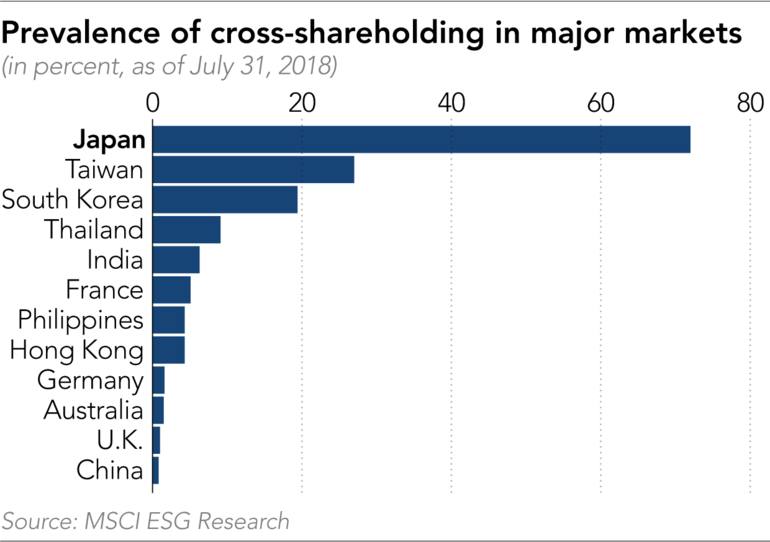 By some metrics, Japan is actually falling behind its regional neighbors when it comes to corporate oversight. The Asian Corporate Governance Association's latest ranking of 12 Asia-Pacific economies last December dropped Japan to seventh place, behind Malaysia, Taiwan and Thailand. Two years earlier, Japan had placed fourth.

While the ACGA acknowledged revisions to Japan's corporate governance and stewardship codes as steps in the right direction, it reasoned that Japanese "regulators have not been addressing shortcomings in minority shareholder rights."

The code calls on institutional investors to disclose how they voted on each proposal at a shareholders meeting, discouraging them from voting a certain way simply because they are close to the company.

Mitsubishi UFJ Kokusai Asset Management renewed its guidelines in April, including a vow to vote against board appointments at listed subsidiaries where external directors occupy fewer than a third of the seats. On Friday, the asset manager revealed it voted against 2,107 director appointment proposals, or 15.1% of the total, at shareholders meetings held between April and June -- including Yahoo's. 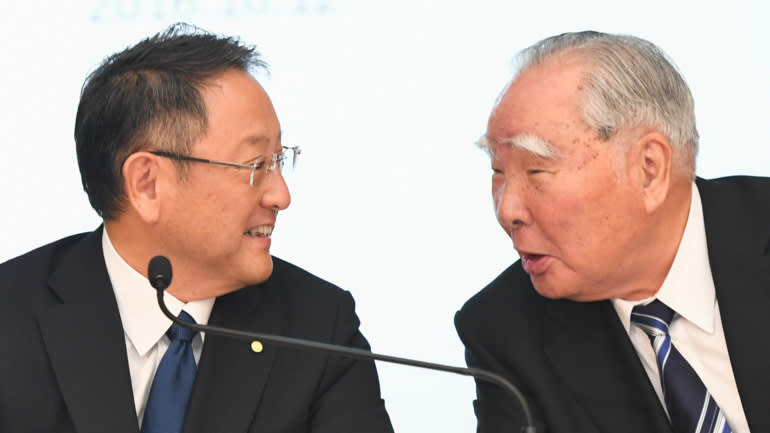 The Mitsubishi group itself encountered investor resistance at this year's shareholders meetings. Like many Japanese conglomerates, it has sent officials of core companies to serve as external directors at smaller group companies, but now these appointments are provoking skepticism.

Seth Fischer, a Hong Kong-based activist investor with decades of experience dealing with Japanese management, said he is "very upbeat on the stewardship code and the voting actions by shareholders," domestic ones in particular. The founder and chief investment officer of Oasis Management said he expects "more aggressive shareholders action to come," forcing Japan Inc. to further step up its governance game.