TOKYO -- God, life, spirit, abstract concepts ... all are topics best taken up with your coworkers.

If you're a Mazda designer. At the low-key automaker, the idea of a supreme being is preached every day at its design room -- and it has brought an enormous benefit to the company.

At the forefront of the debate is Mazda's Managing Executive Officer Ikuo Maeda, otherwise known as the "missionary" of design.

"Lately, the greatest compliment at the company is to be called weird," Maeda said. People who are obsessively fussy about their crafts can channel their devotion to what they love and produce startling results, the thinking goes. 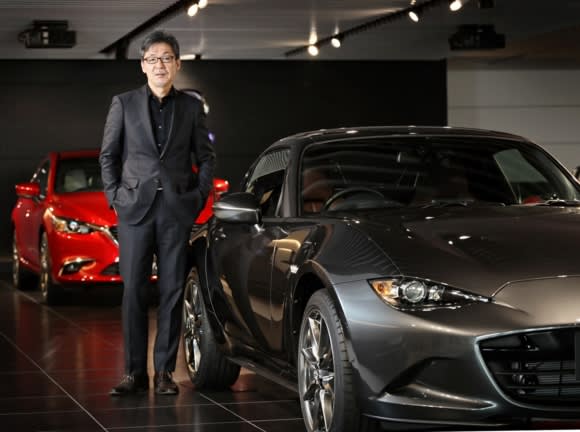 'Missionary of design' Ikuo Maeda poses alongside one of his team's creations at Mazda's home base of Fuchu, Hiroshima Prefecture. (Photo by Tetsuo Oshiro)

After becoming head of Mazda's design unit in 2009, Maeda led the work on sixth-generation models, which began with an SUV, the CX-5.

The generation stands out with characteristic large front grills. Drivers around the world have come to adore the feature, and the SUV placed among the top three in the World Car Design of the Year contest in 2013 and 2014.

After the collapse of Lehman Brothers, Mazda struggled with the strong yen, among other challenges. It logged a net loss for four consecutive years until March 2012. Ford Motors, which had been guiding Mazda as its largest shareholder, also suffered from the financial crisis and sold its stake.

In its distress, Mazda took numerous routes to securing funds, including a capital increase that some saw as risky. In February 2012, it introduced the CX-5, infused with a design concept the team calls kodo.

Kodo is a philosophy that takes to heart what the term's Chinese characters stand for -- soul and movement.

Since then, Mazda's kodo cars, including the Demio compact and Roadstar compact sports car, have been winning award after award. In 2016, the Roadstar became the first vehicle to be dubbed the World Car of the Year and win the World Car Design of the year trophy. The CX-5 SUV was the first of Mazda's sixth-generation models to hit the market.

The company's sales are now stronger than anticipated. Preorders for Mazda's latest CX-8 three-row SUV were six times higher than the model's target. According to a dealership, new buyers now must wait three months for delivery.

"We contemplated what the root of Mazda's sense of aesthetics is and came to the conclusion that our focus is not on static design but on dynamic, three-dimensional form," Maeda said. After a year or so of thinking "we concluded that cars are living creatures and that design breathes life into cars to make them like friends or lovers."

"In design, if you create a theme up front it becomes binding and stops its own development. We wanted to come up with more than a theme; a concept that incorporates philosophy and spirit."

The result is the kodo ethic.

But Maeda and his team also realized they had to do something else if their philosophy was to translate into something that could actually make it into factories and then onto roads.

No matter how cool a design might be, it is ephemeral if it cannot be mass-produced. There is a dynamic at automakers that pits designers against engineers, whose job is to achieve fuel efficiency and safety, and also against production team members, whose job is to come up with ways to cut factory costs.

To reduce these friction points, Mazda releases "top secret" new designs within the company more than a year before a model is set to be rolled out. By disclosing designs at an early stage to engineers and production team members, the designers share their excitement for what they want to hatch.

"To lead employees, you need a magnitude of excitement that moves you to tears," Maeda said.

"Designs sent in digital format do not create excitement. We make clay models and show them to engineers and people in the production unit. We are making such models far more than before." At most automakers, a design begins with a pencil sketch, which becomes a scaled-down clay model and then a full-size clay model.

The kodo process begins with the designers brainstorming on what they want to express -- say speed or toughness. The designers then put their concepts together and come up with the goshintai, or object of worship.

The goshintai, somewhat comparable to the Ark of the Covenant, is usually a metallic object that shines dull -- a futuristic chassis without tires.

The goshintai are created in Mazda's Advanced Design Studio, which was set up in 2010. Experienced clay model sculptors work on them but so too does a group of people primarily responsible for proposing Mazda's design strategy and ideals.

"When I thought about breathing life into cars," Maeda said, "I pictured animals running beautifully. I studied carnivorous animals like cheetahs and pumas. I rigorously analyzed what makes a running cheetah look so beautiful. Cheetahs' eyes and neck are striaight in front of their backbone. The tail follows straight through. Its moves are controlled by the backbone. I thought cars too need this kind of axis."

The company's designers are now close to introducing Mazda's seventh generation species, perhaps this year, and they are fretting about what characteristics these vehicles should inherit from their well-received sixth-generation forebears. "To further the design, we thought about expressing Japan," Maeda said. "We began by understanding the essence of things that are considered beautiful in Japan, such as Mount Fuji and bamboo crafts.

"The Japanese aesthetic, sublime and elegant, is also beginning to disappear from Japan. Around 2013, we started to meet traditional craftsmen -- including living national treasures -- who make things like lacquerware, pottery, and edokiriko cut glass. They sometimes spend half a year to create one object. During that time, they work on that single object for hours every day. Through that process, their tools are spiritualized and create beauty like precision machines."

After expressing the musculature of carnivorous animals, Mazda is now using its vehicles to speak of the simplicity that underlies Japanese aesthetics. "Simple does not mean void," Maeda said. "We will remove unnecessary elements to carve out life."