Despite the fanfare surrounding use of Gwadar port for trade with Afghanistan, experts say the facility has a long way to go before China sees any return on its investment.   © Reuters
ADNAN AAMIR, Contributing writerJanuary 23, 2020 14:01 JST | Pakistan, Bangladesh, Sri Lanka, Nepal, Bhutan
CopyCopied

The CPEC comprises a number of Pakistani infrastructure projects and is a major part of China's Belt and Road Initiative.

On Jan. 14, the cargo ship Diyala, part of the Cosco Shipping Lines fleet, unloaded two containers covered by the Afghanistan-Pakistan Transit Trade Agreement. The cargo of chemical fertilizer was then transported by truck from Gwadar to Afghanistan via the Chaman border crossing through northern Balochistan.

The APTTA allows both countries to use each other's transportation infrastructure to transport goods through designated corridors -- vital to landlocked Afghanistan.

In October 2019, Pakistan's Ministry of Commerce officially declared Gwadar port ready to handle bulk cargo to and from Afghanistan.

The announcement was touted as a major landmark in Pakistani media, while the Chinese embassy in Islamabad tweeted that the development reflected the success of the CPEC and Belt and Road in solidifying regional economic ties. Zhang Baozhong, chairman of China Overseas Port Holding Company, which is operating Gwadar port, told media the APTTA will allow Gwadar to take full advantage of its geographical location. 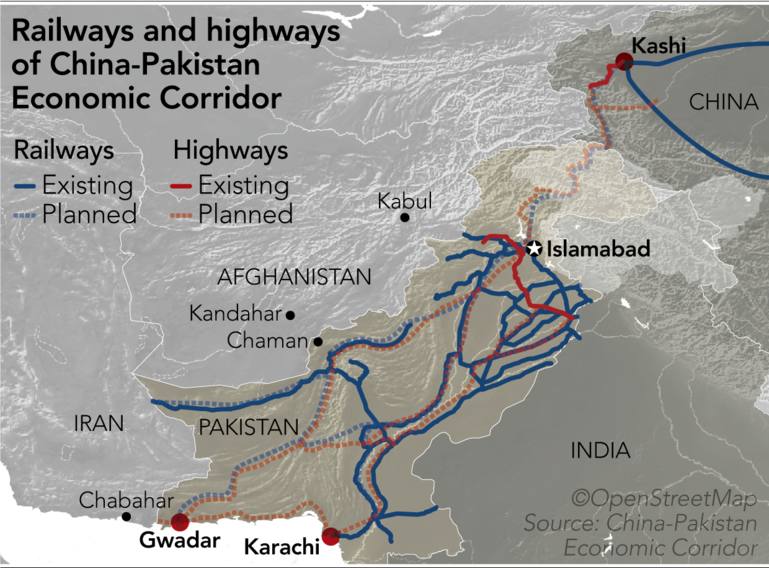 Pakistan's Embassy in Kabul also hailed the development in a statement, saying the Gwadar-Chaman route would be the shortest way to transport goods to Kabul and Kandahar, Afghanistan's two largest cities. "Using Gwadar port for Afghan transit trade will reduce the costs of imports [and] therefore the cost of living in Afghanistan."

Experts believe transporting goods through Gwadar is a way for China to engage Afghanistan in the CPEC.

Michael Kugelman, deputy director of the Asia Program at Wilson Center, thinks that any substantive outcome emerging from Gwadar is a major success, given that there has been more talk than action over the years regarding the port. "The fact that after all these years [Gwadar] is finally starting to become operational in sustainable ways [is] certainly a big deal."

The news that Gwadar port is now integrated into the APTTA may be a blow to Iran's Shahid Beheshti port in Chabahar, which is viewed as a competitor.

The Indian government took over operations at Chabahar in December 2018 after investing more than $100 million in the port and associated infrastructure. New Dehli's investment was seen by analysts as India's attempt to counter Chinese-run Gwadar.

Kugelman believes the Iranian port risks falling on hard times because of U.S. sanctions, but India is still keen on finding a way to move forward.

"Certainly [the Chabahar] project faces financial constraints that Gwadar does not, but there's too much at stake for Kabul, New Delhi and Tehran to simply throw in the towel," Kugelman told Nikkei.

Kugelman claims that with China and Pakistan -- India's two main rivals -- accelerating work on Gwadar, New Delhi will try to redouble efforts to build out Chabahar.

Some analysts are saying that the CPEC has already begun to payoff for China, thanks to the APTTA. However, Kugelman thinks it is too soon to judge. "If shipments keep heading to Afghanistan and a future peace deal in Afghanistan brings more stability and facilitates more goods transit to and from Afghanistan, then there can be a major financial benefit for China," claimed Kugelman.

More than one source based in Gwadar said that unloading only two containers is hardly an indications of success. They say there are many problems at the port that may prevent the APTTA from realizing its full potential.

Hasaan Khawar, a public policy analyst based in Islamabad, believes that Gwadar should not only be looked at in the context of the APTTA. "[Gwadar] port aims to be a major trading hub for goods between the Middle East, North Africa and China," he told Nikkei.

"The APTTA will not generate the required rate of return [from Gwadar port]." he said, adding that other infrastructure besides the port and the CPEC are more than enough to handle the trade under the APTTA.