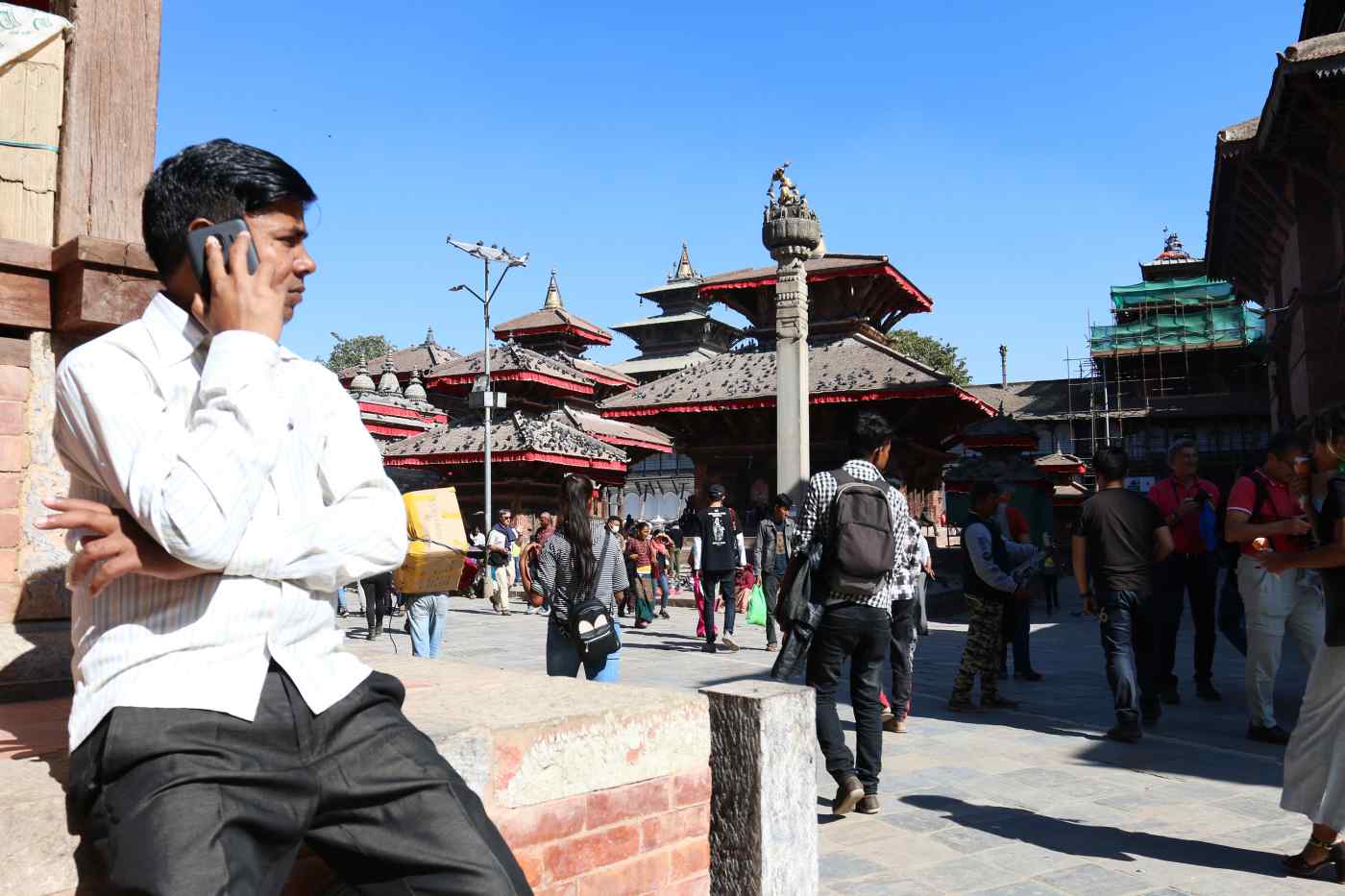 All mobile phones sold in Nepal are made in China and the Chinese WeChat application is the most popular means of communication. (Photo by Tom Vater)
TOM VATER and LAURE SIEGEL, Contributing writersMarch 9, 2019 06:05 JST | Pakistan, Bangladesh, Sri Lanka, Nepal, Bhutan
CopyCopied

TIMURE, Nepal -- Some 140 km to the north of Nepal's capital Kathmandu, China's "Belt and Road" infrastructure plan is in full swing.

"On the Chinese side, the road is so smooth that it looks like Switzerland; on the Nepalese side, it's a disco road all the way from Kathmandu to the border," sighs Indra Bahadur Tamang.

After leaving Nepal's capital at dawn on a crisp winter morning, Bahadur is on his way to the Rasuwagadhi-Jilong border crossing to the Chinese province of Tibet, on the Trishuli River in Nepal's Rasuwa district.

In the early 19th century, Nepal exported rice, flour and clarified butter to Tibet, and imported wool and salt. Today, a fleet of trucks goes empty to Jilong, except for occasional loads of wheat and chili. About 90% of trade across the border consists of industrial and consumer goods moving from China into Nepal.

Chinese infrastructure projects linked to the Belt and Road are mushrooming here, including plans to repair bridges that cross the river border at Tatopani-Zhangmu and Rasuwagadhi-Jilong. For Nepal, the price is paid in diplomatic support for Beijing: The Nepalese consulate in Lhasa, the only foreign diplomatic mission in the Tibetan capital, recently reiterated unwavering support for Beijing's claims to both Tibet and Taiwan. Truck driver Indra Bahadur Tamang covers the 140 km from Kathmandu to Timure, just short of the Chinese border, in one long day. (Photo by Tom Vater)

Bahadur makes three round trips a week, earning $530 a month -- a handsome wage in Nepal, where gross domestic product per head was just over $1,000 in 2017-2018, according to the country's Central Bureau of Statistics.

But the job is risky. Pasang Lhamu, the treacherous road from Kathmandu to the border, is potholed, frequently damaged by landslides, and controlled by the Nepalese military, which carries out frequent checks on traffic. The route demands eight hours of exhausting concentration from drivers. But there is no alternative.

Just before the border the road passes through the Nepalese town of Timure, in an area devastated by earthquakes in 2015. The quakes wrecked the former Tatopani-Zhangmu border post, which has remained closed, and severely damaged the unfinished Rasuwagadhi hydroelectric complex, funded by China Exim Bank and built by a subsidiary of China's Three Gorges Corporation. After the earthquake, the Chinese army cleared the roads, distributed aid and evacuated Chinese survivors from the hydroelectric plant, where 35 people died.

Since then, Chinese involvement in the area has surged, largely on the back of Beijing's Belt and Road Initiative. The hydropower project was restarted in 2016, despite complaints from local people that most of the fish in the Trishuli River had died, and hundreds of families in Rasuwa district have sold land to make way for hydroelectric and goods storage facilities financed by official Chinese development assistance. The police post and new buildings in Timure, which was devastated by earthquakes in 2015. (Photo by Tom Vater)

Unfinished, three-story concrete buildings line the town's muddy main road, while rudimentary plywood hotels and parked trucks dot a sandy embankment to the south. "We are full every night -- our guests include Indian laborers and tourists, Nepalese truck drivers, officials and Chinese businessmen," said Khado, a guesthouse owner whose sister lives a few kilometers away on the Tibetan side of the border.

Serving cans of Chinese Lhasa beer, Khado said she escaped from China 20 years ago, and has not been able to return to Tibet, though she can speak to her sister by telephone. About 20,000 Tibetans live in Nepal, according to diplomats in Kathmandu, but the exodus has dried up as relations between China and Nepal have improved, leaving the exiles unsure about their future.

There is no shortage of international criticism of the developing relationship between China and Nepal. International Rivers, a U.S.-based nongovernmental organization that focuses on environmental and human rights issues, said the risks and benefits of Chinese-backed infrastructure projects in Rasuwa district need to be re-evaluated.

"These dams depend on a constant flow of snowmelt to remain profitable," the NGO said. "But climate change could reduce the snow accumulated at the sources of the Trishuli and the energy benefits of these projects could be short-lived." 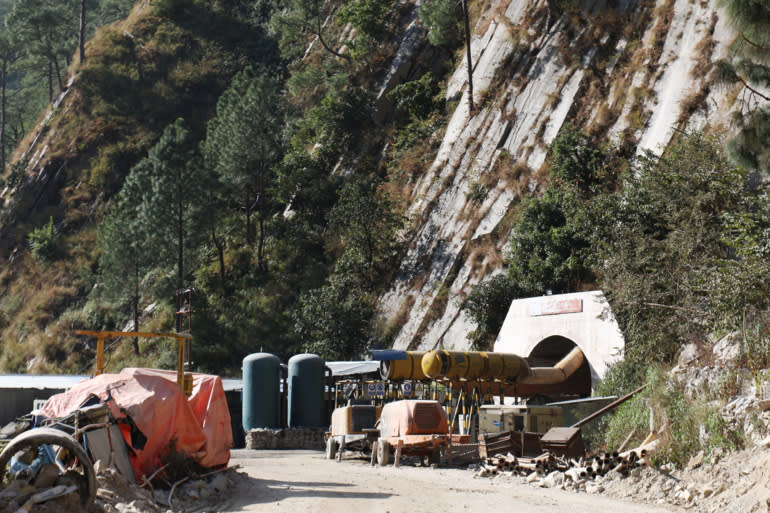 The Rasuwagadhi Hydropower Project is funded by China Exim Bank and built by a subsidiary of China Three Gorges Corporation. (Photo by Tom Vater)

Nepal, crossed by 6,000 rivers, sees its largely untapped hydroelectric potential as a key export resource, and remains keen to encourage foreign investment. Theoretical generating capacity is about 84,000 megawatts, according to the U.K.-based International Hydropower Association, compared with installed capacity of just 753 MW. But the country also hopes to exploit its strategic position as a convenient gateway to the Indian market on its southern border.

China has spent billions of dollars on infrastructure projects in Tibet that could facilitate this traffic, including a high-speed rail line from Beijing to Lhasa that opened in 2006. In June 2018, Nepal and China revived a plan to bring the line to Jilong by 2020, with an extension to Kathmandu via Timure by 2027 and an eventual connection to Lumbini, on Nepal's border with India.

The $8 billion project presents huge difficulties -- 90% of the track on Nepalese territory would have to run over bridges or in tunnels, according to Nepal's Department of Railways. However, Nepalese Foreign Minister Pradeep Gyawali insisted in a recent interview with the Nikkei Asian Review that the project remains under discussion, although financial arrangements are yet to be fixed.

"China sells the railway as a symbol of Sino-Nepalese friendship," said Ritu Raj Subedi, a columnist for The Rising Nepal, a pro-government Nepalese newspaper. "Of course this is a geopolitical project for them, but a good investment for us, [because it will] will connect Nepal to the world's second-largest economy and to the Eurasian transport network." 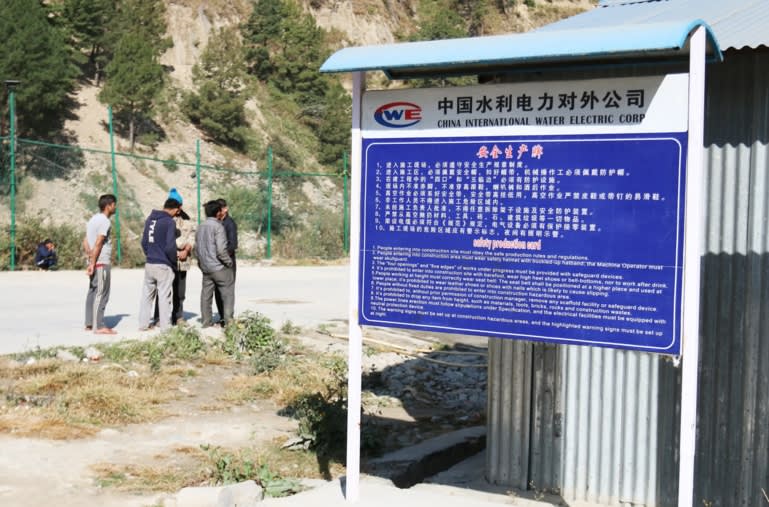 Workers from China, India and southern Nepal at the Rasuwagadhi Hydropower Project live in dormitories and kill time on basketball courts or in nearby natural hot springs. (Photo by Tom Vater)

Nepal and China also signed agreements in June to develop hydropower projects, cement plants and agri-food parks costing a total of $2.4 billion. According to Nepal's Ministry of Industry, Chinese foreign direct investment in Nepal topped all other countries for the third consecutive year in the 12 months to July 2018, accounting for 84% of the $515 million received.

Indian FDI in the comparable period amounted to about 10% of China's total, but both Chinese and Indian media have reported that Chinese investors are being offered preferential terms by Kathmandu, including substantial corporate income tax rebates.

"For example, there is a 100% exemption for 10 years and 50% exemption in the following five years in the field of energy, and a 100% exemption for five years in the tourism industry when investing more than 2 billion Nepalese rupees ($17.5 billion)," Binod Prasad Acharya, economic minister at the Nepalese Embassy in Beijing, told a seminar in the Chinese capital in February 2017, according to the Indian Express newspaper and China's state-run Global Times. India and the U.S. have warned Nepal against opaque loans and financing conditions offered by China, which critics say are intended to entice fragile developing countries into debt traps, allowing China to seize control of vital assets.

For the people of Rasuwa district, however, China remains a tantalizing opportunity. Pemba Tashi, 37, runs a guesthouse on Nagthali Danda, a spectacular meadow a few kilometers above Timure on the Tamang Heritage Trail, a long-distance trekking route. To finance the education of his four children, Tashi sometimes goes to China to work in the construction industry for 150 yuan ($22) a day, which is at least twice what he can earn at home.

"We can get any kind of contract, from a few weeks to three years," Tashi said. "Women go there too, to work in shops or bars." Since 2002, inhabitants of Rasuwa district have been eligible for a free Border Citizen Card that allows them to travel, work and shop in China within 30 km of the border.

"Everything in my guesthouse is from China, down to the last spoon," he said. "I have to go there to work and to shop. There's no money here. I have to be realistic, going in and out of China is the only way I will be able to look after my family in the coming years."