China and Russia blast protectionism ahead of G-20 summit 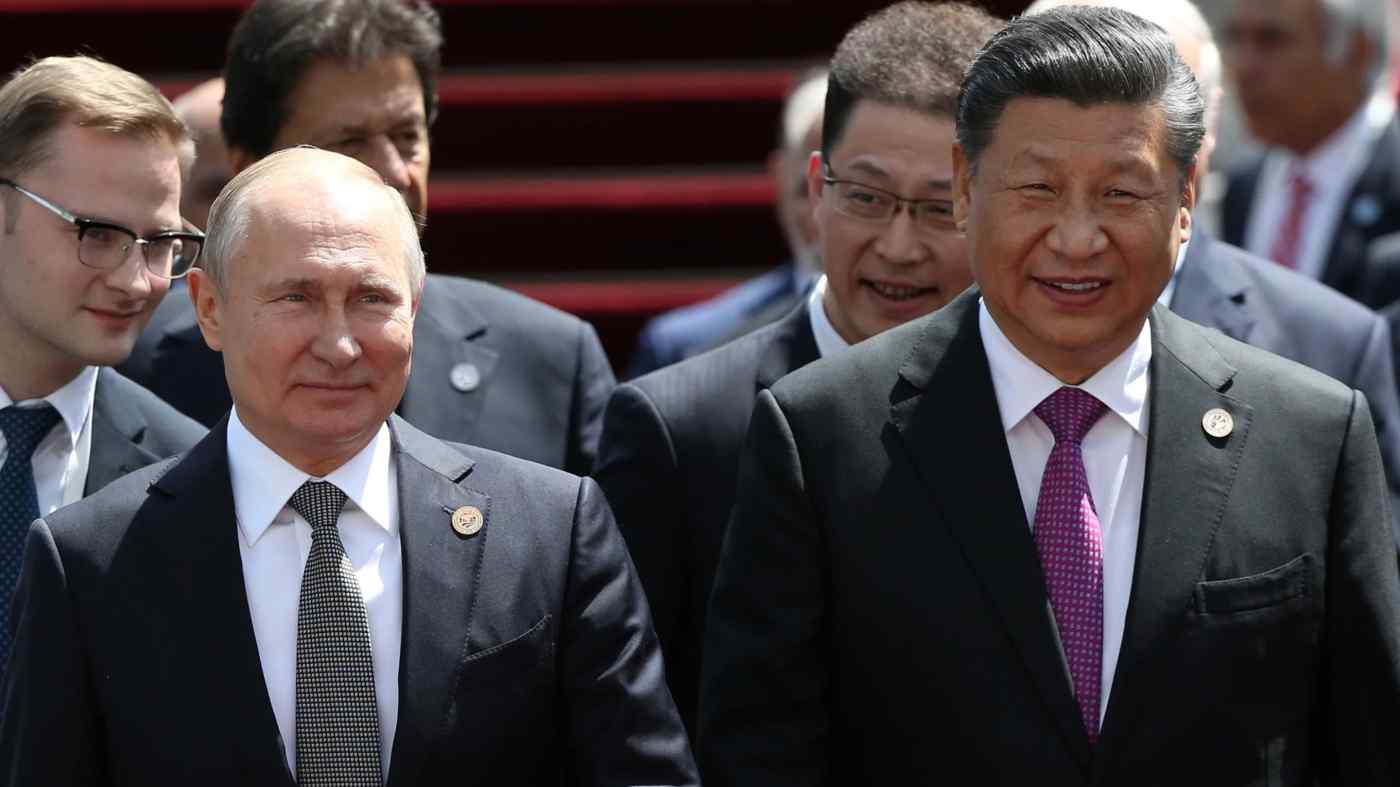 BISHKEK/BEIJING -- Chinese President Xi Jinping and Russian counterpart Vladimir Putin reaffirmed a stance against protectionism at a meeting of a Eurasian body, presenting a united front on trade ahead of an encounter with U.S. President Donald Trump at the Group of 20 summit.

But while they may both oppose Trump's "America first" approach to trade and foreign policy, Beijing and Moscow are struggling to find a balance between their own interests in Central Asia as China extends its influence over former Soviet nations.

"Coordination is needed for free trade and a just order," Xi said at the two-day meeting of the Shanghai Cooperation Organization, which began on Friday in Kyrgyzstan's capital of Bishkek. He indirectly condemned Trump for threatening additional tariffs against China.

Leaders of the eight-member organization, which is led by Moscow and Beijing, issued a statement Friday calling for greater cooperation "to prevent any protectionist actions in international and regional trade." They also voiced concern over missile defenses in certain countries, in an apparent swipe against the U.S.

Putin slammed the U.S. for withdrawing from the multilateral nuclear deal signed with Iran in 2015. The move "is not only destabilizing the region, but also can undermine the nuclear nonproliferation regime," he said in a speech.

Trump has expressed his interest in meeting both Xi and Putin at the sidelines of the upcoming G-20 summit in Osaka. By striking similar tones on the global order, Xi and Putin appeared to seek greater leverage in bargaining with the U.S. president.

Still, tensions are bubbling under the surface as China increases its influence over former Soviet nations in Central Asia through its Belt and Road infrastructure initiative, which seeks to build roads, ports and other connections across Eurasia.

So far, the duo have tried to strike a balance by focusing on different areas under the Shanghai Cooperation Organization: China on economic matters, and Russia on security. But Moscow has strong concerns over Beijing's overtures toward a region it has long considered its backyard.

The key lies in the balance between the Belt and Road and Russia's own cross-border initiative, the Eurasian Economic Union, which includes former Soviet countries like Kazakhstan and Kyrgyzstan. Xi and Putin signed an agreement in 2015 to align the two frameworks. But projects based on the agreement have made little headway, according to independent Russian media reports.

In a speech in Russia last week, Xi said China will link its efforts to the "Greater Eurasian Partnership" proposed by Putin and called on Moscow to play an active role in the Belt and Road initiative. His remarks were seen as an attempt to ease Russian concerns before they flare up.

Some Central Asian countries worry that China's presence could undermine their independence. Protests broke out in Kyrgyzstan early this year calling for limits on Chinese immigration and labor. A China-backed railway project in Kazakhstan was canceled due to a lack of funds.

Tajikistan and Kyrgyzstan also receive financial assistance from China to build up their infrastructure, pushing them deeper into debt. Xi is visiting both countries over the weekend to shore up goodwill.

Also in attendance at the meeting was Iranian President Hassan Rouhani, whose country was blamed by the U.S. for an attack on two tankers in the Gulf of Oman Thursday -- a claim that Tehran denies, said American sanctions against his country "impede normal trade transactions."