COLOMBO -- China, no stranger to building islands, has finished one off the coast of Colombo that gives Sri Lanka, a strategically located South Asian nation, the potential of erecting a futuristic business hub.

Billed as Port City Colombo, the 269 hectares of land reclaimed off the coast of Sri Lanka's largest city was officially declared part of the country last weekend. The night sky above Colombo's coast lit up with fireworks to mark the moment this Chinese-led venture was formally able to begin attracting foreign investors.

Seasoned observers reckon the island will further deepen China's economic ties with debt-strapped Sri Lanka, where India, the U.S. and Japan are also vying for influence.

But it was China that provided the $1.4 billion investment to dredge the sea and build the artificial island. It is the largest foreign direct investment project ever undertaken in Sri Lanka.

Diplomatic sources in Colombo say Port City Colombo stands apart from other big-ticket ventures in the country, a big beneficiary of China's belt and road largesse. Billions of dollars in Chinese loans have resulted in a slew of projects -- a port, airport and highways.

Port City Colombo will not join this list; the FDI project comes at no financial cost to Sri Lanka. 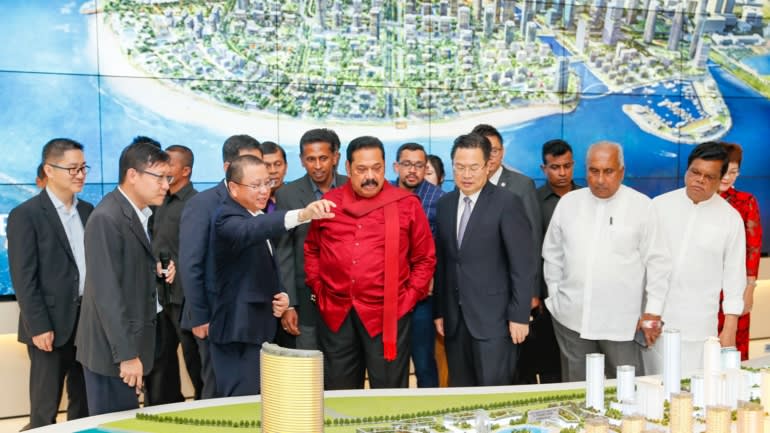 Officials at CHEC Port City Colombo, a company floated by CHEC for this venture, are targeting investors from the Middle East, India, Southeast Asia and China in their endeavor to turn the island into "South Asia's premier residential, retail and business destination," as the company states in its promotional material.

Financial analysts in Colombo reckon that Port City Colombo's location will allow it to draw Indian businesses. At the company's road show in Mumbai, India's financial capital, one message was driven home -- that the new hub is a three-hour flight away.

But as CHEC Port City Colombo points toward its goal of attracting a further $13 billion in property development investments, it awaits some action in the Sri Lankan parliament, which needs to pass several pieces of legislation, including one to make the island a special economic zone.

Some of the legislation is contentious, especially that calling for a new legal regime and regulations that some observers are likening to the "one country, two systems" formula China uses with Hong Kong. That will require an amendment to Sri Lanka's constitution.

Thulci Aluwihare, head of strategy and business development at CHEC Port City Colombo, says a strong government push is needed if the legislative hurdles are to be cleared. "There is a draft SEZ law waiting for cabinet approval," he said. "Till such time we can only do soft marketing to attract potential investors." Prime Minister Mahinda Rajapaksa receives a gift from the Chinese delegation. Rajapaksa laid the foundation for the island toward the end of his presidency. (Photo courtesy of CHEC Port City Colombo)

According to Malik Cader, a former director general of the Securities and Exchange Commission of Sri Lanka, the legislation has absorbed English common law principles regarding dispute resolution within Port City Colombo. "The government needs to get these laws approved because [other] countries in South Asia are getting bullish to attract foreign investment, and this opportunity cannot be lost."

Influential domestic business lobbies are making a similar case. The Ceylon Chamber of Commerce, the island's oldest and largest business association, is throwing its weight behind Port City Colombo, saying it will give Sri Lanka's digital and information technology companies a boost.

"The Port City is an opportunity for Sri Lankan tech and startups to upgrade and look outside," said Shiran Fernando, the chamber's chief economist, insisting that the island could eventually become a smart city.

Sri Lanka's new, pro-China government, headed by President Gotabaya Rajapaksa, appears to have heeded this call. Political allies of the president, elected in a landslide in November, said in late November that modern laws are needed to attract foreign investors to the project.

Sri Lanka began tilting toward China while Mahinda Rajapaksa was president, from 2005 to 2015. On Saturday, Mahinda, now the prime minister, was present to celebrate a milestone for which he laid the foundation.