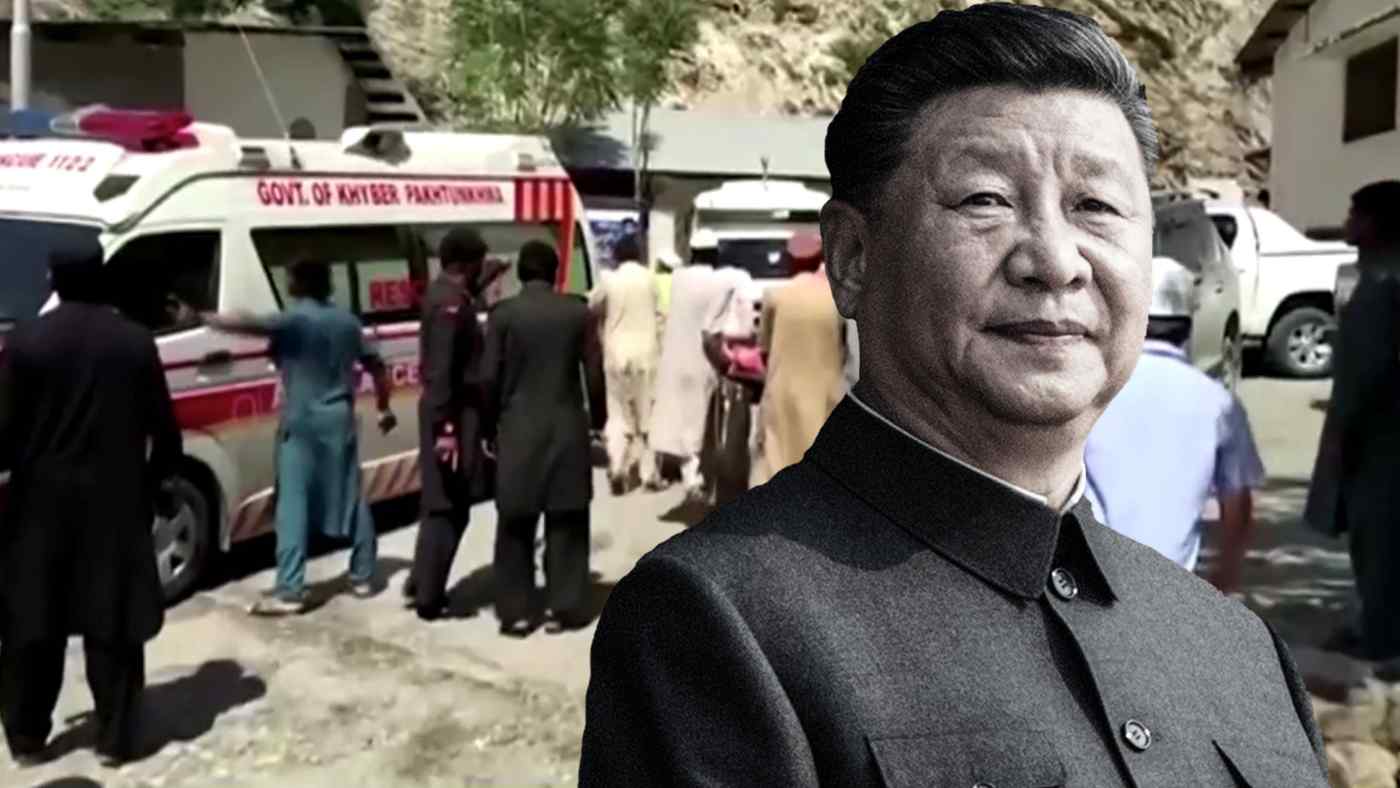 An ambulance arrives at a hospital in Dasu after a bus with Chinese nationals on board plunged into a ravine in Upper Kohistan, Pakistan, on July 14 following a blast. (Nikkei montage/Reuters/AP)
ADNAN AAMIR, Contributing writerJuly 21, 2021 12:00 JST | Pakistan
CopyCopied

KARACHI -- Following a terror attack that killed nine Chinese engineers in northern Pakistan last week, Beijing has ramped up pressure on Islamabad, postponing a high-level joint committee for the Belt and Road Initiative and halting a billion-dollar hydropower project.

The Dasu Hydropower project currently under construction in northwest Pakistan is led by China Gezhouba Group Company (CGGC) at an estimated cost of over $4 billion. It is slated to have a capacity of 4,320 MW.

Contrary to media reporting, the project is not part of the China-Pakistan Economic Corridor (CPEC) but instead is financed by the World Bank.

After 13 people were killed in a bus explosion in the Kohistan district on July 14, including nine Chinese nationals working on the dam, Pakistan's foreign office called it an accident caused by a mechanical failure. This triggered a strong response from Beijing, demanding that Islamabad probe the blast. China's projects in Pakistan face major security threats: A wounded Chinese national at a hospital in Kohistan province after a bomb caused a bus crash that killed nine of his colleagues, all engineers.   © AP

A 15-member Chinese team is in Pakistan to investigate the incident. So far no terrorist group has claimed responsibility for the attack.

Fakhar Kakakhel, a senior analyst covering militancy in Pakistan, said that the attack was typical of sabotage. "Obviously, these are efforts to block the CPEC mega project," he told Nikkei Asia. Kakakhel added that previously a number of attacks targeted only the outlying areas of the CPEC in Balochistan, but this time it happened close to China.

Beijing's initial reaction was to cancel the 10th Joint Coordination Committee meeting. Chaired jointly by top officials of Pakistan and China, JCC is the ruling body for CPEC -- the $50 billion Pakistan component of Belt and Road. The previous JCC was held in November 2019.

In a July 15 tweet, Asim Saleem Bajwa, chairman of the CPEC, said: "JCC-10 meeting on #CPEC which was scheduled to be held on 16th July 21, has been postponed to a later date."

This year's meeting was supposed to approve the financing mechanism for the Main-Line 1 railway project. "The delayed JCC meeting means that the ML-1 project will not be starting anytime soon," a government official with knowledge of the matter told Nikkei on condition of anonymity. The official added that Pakistan wants the JCC meeting to be held soon but that will not be possible without a go-ahead from Beijing.

Apart from postponing the JCC meeting, China also suspended work on the Dasu Hydropower Project. CGGC then announced on July 17 that it would not continue with work and that most of the local employees will be laid off.

Officials said that after the announcement, Islamabad requested CGGC to reconsider to prevent a domestic backlash. The Chinese company subsequently withdrew its order terminating the contracts of local employees. "[CGGC] has temporarily suspended work on Hydropower Project and it will resume work when the security matters are sorted out," said another Pakistani government official, who also requested anonymity.

While forces hostile to China have upped the ante against CPEC in Pakistan, China has countered with a more aggressive posture. Global Times, the mouthpiece of the Chinese Communist Party, noted in an editorial that anti-government forces in Pakistan who target Chinese personnel and projects will incur Beijing's wrath.

Amid the crisis, China has remained undeterred, reaffirming its support for Pakistan while warning anti-government forces in the country. As stated in the Global Times: "[China] will not only provide the necessary support and assistance if Pakistan's strength is insufficient, China's missiles and special forces could also directly participate in operations to eliminate threats against Chinese in Pakistan with the consent of Pakistan. We will set an example as a deterrent."

One of the anonymous Pakistani government officials seemed to concur. "This attack and the strong reaction from Chinese government hint toward a change in approach by Beijing to acts of sabotage against its interests in Pakistan." He added that Beijing may have run out of patience and will likely deal with threats head-on.