KARACHI -- As peace negotiations between the Afghan government and the Taliban progress, China is pushing Pakistan to open its five key border crossings with Afghanistan to allow bilateral and transit trade and the resumption of Afghan exports to India.

Afghanistan is a landlocked country and relies on Pakistani land routes and seaports to conduct international trade. The two countries share 18 crossing points, of which the most commonly used are Torkham in Pakistan's northwest and Chaman in its southwest. The border points were closed by Pakistan in March to limit the spread of coronavirus.

Several other border points have also been closed at various times since 2014 because of the tense relations between the two countries as each accused the other of supporting Islamist and separatist militants fighting.

Experts and officials believe that Pakistan's recent steps to open key five borders are the result of China's ongoing efforts to extend the China-Pakistan Economic Corridor, a flagship Belt and Road Initiative project, to Afghanistan.

In the past two months, Pakistan has not only reopened the Torkham and Chaman crossings but also opened three other crossings. Ghulam Khan, Angoor Adda and Kharlachi in Pakistan's northwest are now operating around the clock, six days a week to increase the volume of trade and facilitate business activities between the two countries. 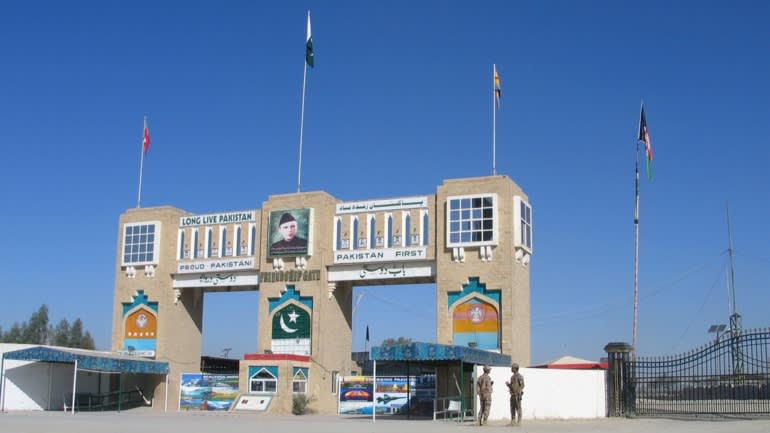 The Friendship Gate at the Pakistan-Afghanistan border town of Chaman, Pakistan, on March 2. The post has been closed since Pakistan sealed its borders with Afghanistan as a measure prevent the spread of coronavirus.   © Reuters

U.S. special representative for Afghanistan Zalmay Khalilzad in recent meetings has asked Pakistan to open the Torkham and Chaman borders, but Pakistani officials admitted that the opening of the three other crossings were decided in the Beijing-initiated China-Afghanistan-Pakistan Trilateral Vice Foreign Ministers' Strategic Dialogue, which was set up to ease tensions between Kabul and Islamabad.

In their recent virtual meeting in July, senior officials of three countries discussed the Afghan situation and agreed to explore "new ways of deepening cooperation, including advancing connectivity under the [Belt and Road Initiative], and other regional economic initiatives."

Despite the escalation of tension with India, Pakistan also announced in July it would resume Afghan exports to India through eastern Wagah border crossing to "facilitate Afghanistan's transit trade."

"With this step, Pakistan has fulfilled its commitments under Pakistan-Afghanistan Transit Trade Agreement," Pakistan's foreign ministry said in a statement, referring to a bilateral agreement initially signed in 1965 to allow the transit of Afghan exports through Pakistan to the Wagah border with India.

Traders from both sides of the border are hailing the moves. Daru Khan Achakzai, leader of the Pakistan-Afghanistan Joint Chamber of Commerce and Industry, is one of those who expresses hope that the initiative will help tp improve trade between the two countries. "The volume of bilateral trade was around $3 billion [in 2011] and we were expecting that it would rise to $5 billion in 2015," Achakzai said. "But for several reasons, mainly the tense relationship between the two countries, the overall volume of trade declined to around $2 billion, which is worrisome."

The development of the new trade routes is getting international support. With financial assistance worth $460.6 million from the World Bank, Islamabad in July approved the Khyber Pass Economic Corridor, a project that includes a 48km four-lane expressway between Peshawar and the Torkham border crossing.

China has applauded Pakistan for opening its borders with Afghanistan. "China supports the CPEC's extension to Afghanistan so that the Afghan people can benefit from the BRI," said Chinese Foreign Ministry spokesperson Hua Chunying during her regular briefing in July.

However, China's plans to expand the Belt and Road to Afghanistan left India with limited options while adding to economic, political and security concerns. India officially opposes any projects under the name of Belt and Road, as part of the route passes through Pakistan-controlled Kashmir, over which New Delhi claims sovereignty.

When Chinese President Xi Jinping in 2013 inaugurated the Belt and Road Initiative, which is eventually to comprise a vast network of infrastructure projects spanning more than 60 countries, it largely excluded Afghanistan, moving through Central Asia and Pakistan instead. But when most NATO troops withdrew from Afghanistan in 2014, Beijing revised the policy and started considering the country as a primary link between the Central Asian republics and the CPEC. Trucks bound for Afghanistan are loaded at a transit depot in Peshawar, Pakistan, in September 2015.    © Reuters

Beijing has deepened its involvement in Afghanistan partially due to the stability in the region.

"China wants to ensure that after the withdrawal of U.S. forces from Afghanistan, any contact between the Afghan Taliban and ethnic Uyghur Muslim militants, particularly the [East Turkistan Islamic Movement], a group seeking independence from China, will be blocked," a senior Pakistan Foreign Ministry official, who requested anonymity, told the Nikkei Asian Review.

In fact, China, Pakistan and Afghanistan in the July trilateral dialogue "agreed to strengthen counter-terrorism and security cooperation, combat the East Turkistan Islamic Movement, and all other terrorist forces and networks posing threats to the common security," according to a statement released by Pakistan's Foreign Office.

Despite the opening of the borders however, things are not improving as expected.

Traders on the borders complain that slow customs clearance and complicated regulations and procedures have been irking the Afghan traders who are now opting for alternative routes, such as Iran's Chabahar, a port that has already been functional for trade with Afghanistan.

"Trucks and containers loaded with all sorts of goods, including perishable commodities like fruits and vegetables, are held up for days and weeks because of the slow process of customs clearance," said Ziaul Haq Sarhadi, head of an association of custom clearing agents working at Pakistan-Afghan borders. "On the other hand, shipping companies have been charging the hefty detention fee from Afghan traders."

If policies are not reviewed immediately, the renewed trade momentum between the two countries will "completely end," Sarhadi said.