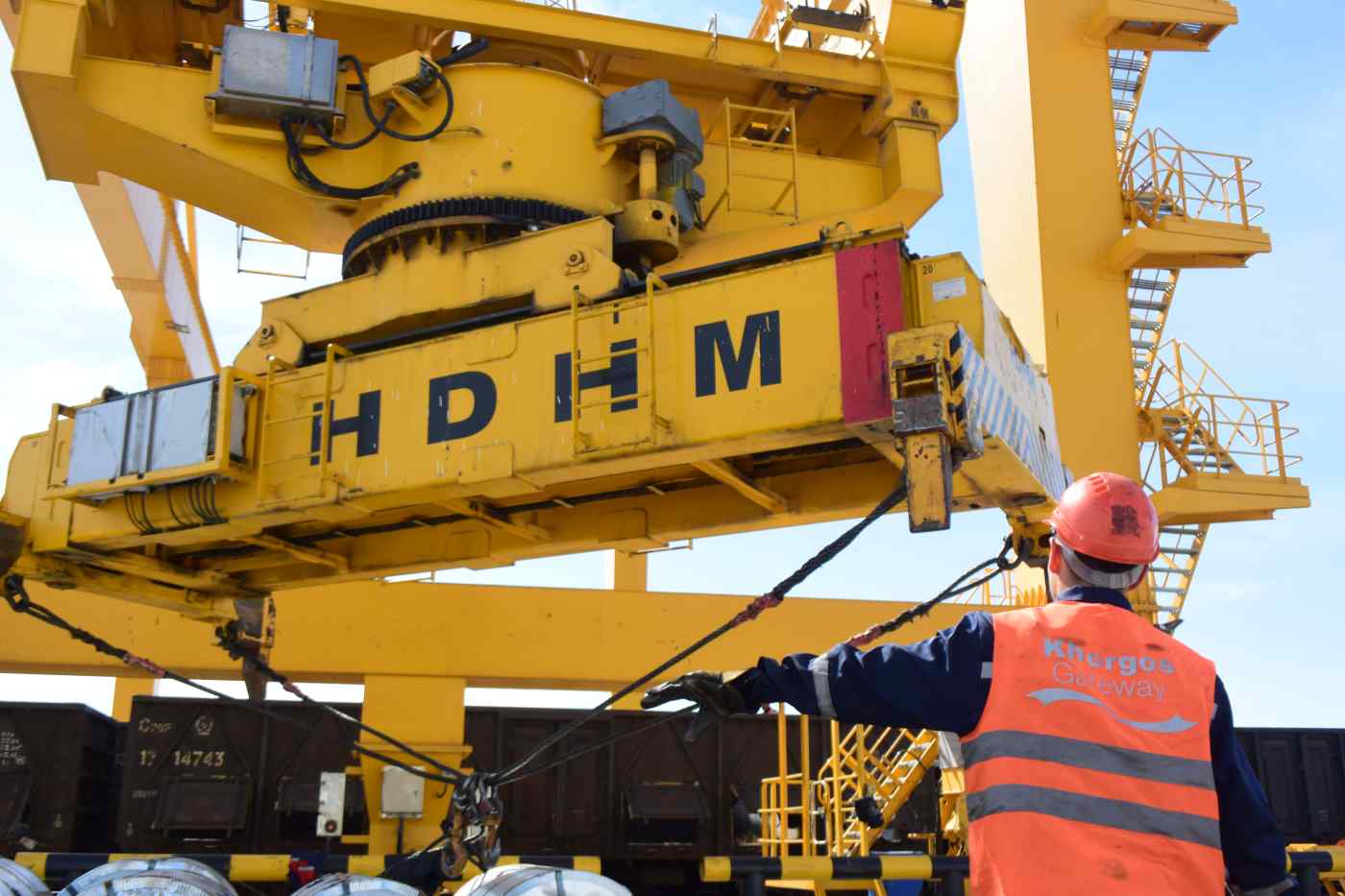 A worker at Khorgos Gateway, which operates a container terminal on the border between Kazakhstan and China, directs a crane as it unloads steel coils from a container. (photo by Wataru Suzuki)
WATARU SUZUKI, Nikkei staff writerApril 24, 2019 11:10 JST | Mongolia, Central Asia, Afghanistan
CopyCopied

KHORGOS, Kazakhstan -- One of the most ambitious projects in China's Belt and Road Initiative aims to transform a vast plot of open land along China's border with Kazakhstan into the launch point for a river of Chinese goods flowing to Europe by rail.

A depot hums with giant cranes, hoisting containers. Newly built rail lines stretch into the distance and hundreds of workers go about their jobs. The vision is taking shape. But just four years in, the project already faces slowing growth.

The Khorgos Eastern Gates Special Economic Zone, as the project is formally known, is still tiny. Its annual shipping volume is equal to what a small Chinese port handles in a month. Failing to meet its growth targets would be huge setback for Beijing's grandiose ambitions for a modern-day silk road.

"The infrastructure has been built," said Hicham Belmaachi, chief operating officer of Khorgos Eastern Gates, which manages the special economic zone. "But you need to power [it] with people, technology and standards. If you just leave it by itself, it can end up as a white elephant tomorrow."

The Kazakh government, meanwhile, is leery about accepting Chinese financing for the project. The national rail company, Kazakhstan Temir Zholy, sold a 49% stake in the dry port operator to two Chinese companies in 2017. The government in Nursultan has stressed that loans for the project comes from Kazakh banks.

Whether the project has any appeal to investors outside China is now being put to the test. Khorgos Eastern Gate hopes such investors will build warehouses and factories, turning what is now a small container terminal into a sprawling logistics hub.

The project is unfolding as Beijing tries to drum up international support for the Belt and Road, a huge infrastructure building program into which China has poured more than $100 billion a year in new contracts and direct investment since 2014. On Thursday it will host the second Belt and Road forum, with leaders from 37 countries expected to attend. Boosters say the initiative is paving roads, laying rail lines and building ports desperately needed by developing countries. Critics say the projects mostly benefit Chinese companies and banks. The activity in Khorgos highlights the scale of China's ambition to reshape global commerce. Construction on the 6 -sq.-km site began shortly after President Xi Jinping unveiled the Belt and Road Initiative in 2013.

Located about four hours by car from Almaty, Kazakhstan's largest city, Khorgos seems an unlikely place for a logistics hub. But, said Ruslan Izimov, head of the China research program at Kazakhstan's state-run Institute of World Economics and Politics, "It is important for China because Khorgos connects Xinjiang's densely populated regions in the west with Central Asia."

The terminal's main feature is a "dry port" where cranes load containers onto trains instead of ships. On a recent visit, workers wrapped ropes around steel coils. A crane then lifted them from Chinese containers onto the ground, to be later reloaded to Kazakh trains. Freight from China must be reloaded onto Kazakh cars before continuing toward Europe because China and Kazakhstan use different rail gauges.

From the Kazakh side of the border, the railway stretches more than 8,000 km to the west. According to Belmaachi, cargo can be shipped from a Chinese port via Khorgos, reaching Europe within 15 days, faster than by sea and much cheaper than by air. This gives Chinese companies a way to ship products relatively quickly. Kazakhstan, for its part, can take advantage of its strategic location to develop an inland logistics industry. A crane at the "dry port" in Khorgos can shift cargo from Chinese railway cars to those that run on the wider Russian-style gauge tracks used by Kazakhstan. (photo by Wataru Suzuki)

To attract Kazakh workers to the remote border outpost, a new village called Nurkent has been built from scratch and offers free housing, along with schools and restaurants. Another feature is the International Center for Boundary Cooperation, a free-trade zone in which people can cross either side of the border without a visa and shop duty free. Kazakhs can even drop off their purchases near the border and have them shipped to their homes. A Kazakh mother and her daughter were resting after buying tricycles, clothes and other items on the Chinese side.

But the bustle hides a harsh reality. According to a recent presentation to journalists, the dry port handled 133,922 twenty-foot-equivalent units in 2018, up 44% from a year earlier, but a significant slowdown from the 113% growth it logged in 2017.

Belmaachi said the cooling growth was mainly due to congestion on the border between Poland and Belarus -- a "hiccup" that he said is being resolved by the opening of new rail lines. He expects the dry port to reach its full capacity of 500,000 TEUs "in four to five years."

Some analysts point to other bottlenecks. Izimov said one snag is that containers returning from Europe are often empty. He also points to slowing global trade. The World Trade Organization recently said trade in goods will grow 2.6% by volume this year, down from 3.0% growth in 2018, due to the U.S.-China trade war and Europe's slowing economy.

To boost activity, the terminal operator is encouraging foreign companies to invest in logistics and manufacturing. Adding warehouses, for example, will allow trucks from China to pick up goods delivered from Europe by train, which can be more efficient than using trains for the entire journey. Assembly plants can pull in suppliers. The terminal also wants to speed up customs clearance by putting the documentation process online. Kazakh shoppers can purchase duty-free items on the Chinese side of the free-trade zone, which they can enter without a visa.  (photo by Wataru Suzuki)

But attracting outside investors has been a slog. In 2010, Senko, a Japanese logistics company, set up a joint venture with Lancaster of the U.K. to operate a logistics center in Khorgos. But it sold its stake to its British partner last August after it failed to get approval from Kazakh and Chinese authorities to perform its own customs checks.

A separate group of investors, including Russia's Verno, is opening its first warehouse as early as next month, while a Dubai-based company is building a grain storage facility, according to Belmaachi.

Belmaachi acknowledges that the challenges are even greater for industrial development. "You require a little bit more risk from investors, because they need to study the market and make sure the workforce is adapted to what [they] want to produce," he said. "It is moving step by step, by small, local producers."

Further development looks likely, therefore, to depend on foreign investors. With the initial excitement surrounding the Belt and Road cooling, China may need to do more to show that the road ends in profit.

Contributing writer Naubet Bisenov in Almaty contributed to this report.