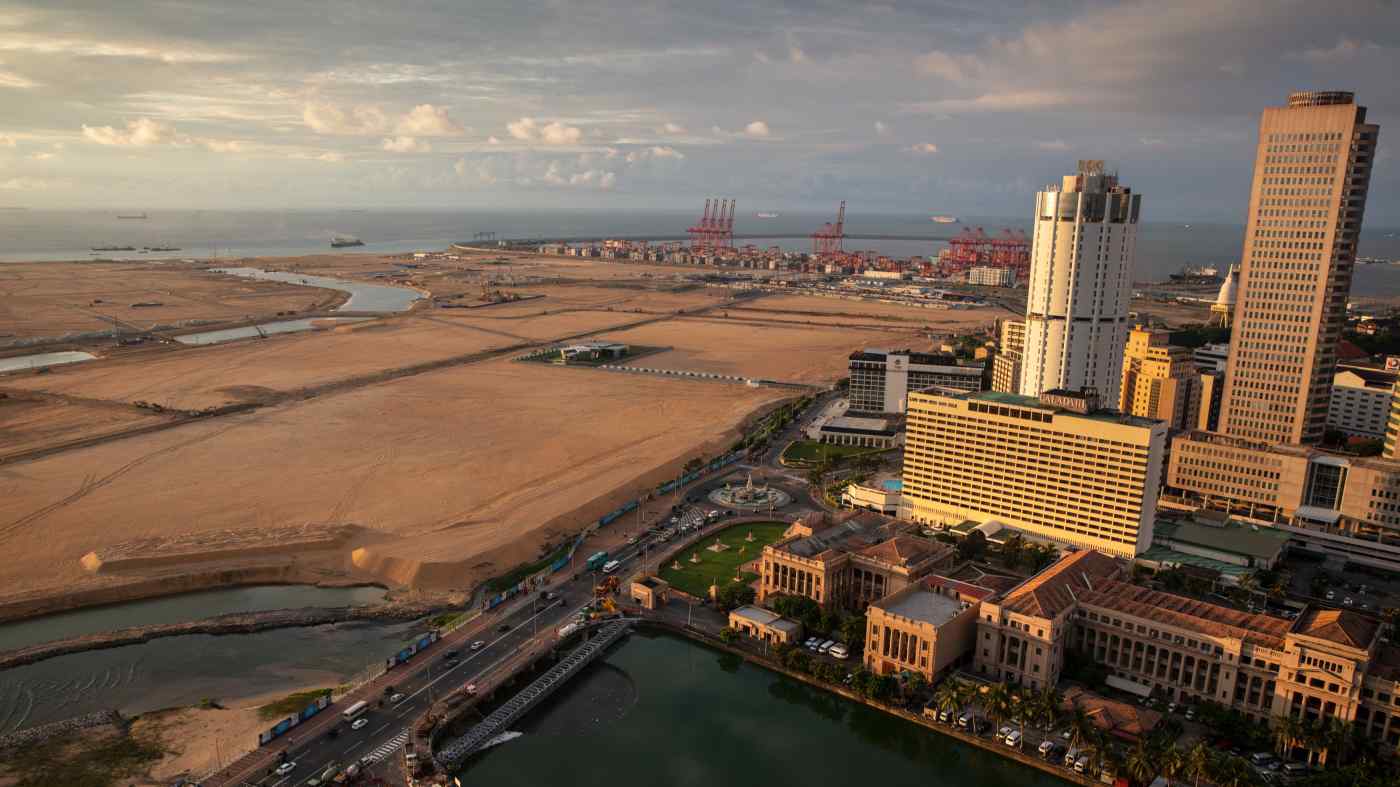 As China steadily expands its footprint across the island, China Harbor Engineering Company (CHEC), a subsidiary of state-owned China Communications Construction Company (CCCC), won a new development project last month when the government approved CHEC's proposal for a 17-km elevated highway on the outskirts of Colombo.

But the terms of the deal allow CHEC to own the highway, recover the principal, earn profits, and then after 18 years -- finally -- hand it over to the Sri Lankan government, making CHEC the first foreign company to own a highway in Sri Lanka.

Opposition parliamentarian Harsha De Silva highlighted that the project has been in the pipeline for several years, and the previous government also wanted to construct it, but in a public-private partnership as the original estimate was around $1 billion.

"In 2016, when the government [led by the current opposition] was looking for an investor, a feasibility study indicated that the project [could not] be done on a purely build, operate and transfer (BOT) basis, which CHEC has come forward to do," he told Nikkei Asia. Critics of the $1.4 billion Colombo Port City now under construction claim terms of the deal fail to provide proper oversight of entities that will operate there. (Photo by Munza Mushtaq)

De Silva, an economist by profession, also said that an investor would not be able to recover their original investment plus a reasonable profit by just collecting tolls on a 17-km highway.

However, Umesh Moramudali, a lecturer at Colombo University who researches public debt and finance, feels that BOT projects are much better than debt-financed projects because the country does not have to pay overseas investors back, eliminating foreign currency outflow.

"But, when I say BOT is good for the country, it should be done in a competitive bidding process and in a transparent manner," he said. "Also, the project should benefit the country and not the company. The issue here is that this BOT project has created a lot of doubt."

CHEC has a significant project portfolio in Sri Lanka, especially in Colombo and Hambantota, the latter being the hometown of former President and current Prime Minister Mahinda Rajapaksa. During his tenure, Sri Lanka increased its dependence on China for investment in massive infrastructure projects. The presidency is now held by Gotabaya Rajapaksa, Mahinda's younger brother.

CHEC has led several infrastructure projects in Sri Lanka, including Hambantota Port and Mattala International Airport -- both of which are white elephants -- and is currently constructing the $1.4 billion Colombo Port City. CHEC has steadily expanded its footprint in Sri Lanka, starting with the Port of Hambantota, which the Chinese company leased for 99 years in 2017. (Photo by Yuji Kuronuma)

Sri Lanka touts the new offshore development as a future financial hub but the 269-hectare plot has already attracted a fair number of critics, who claim the government fast-tracked controversial legislation that gives China sweeping powers over the site at the expense of Sri Lankan sovereignty. Other concerns cite the legislation's lack of control over the offshore banks and companies that will operate there. Observers are worried that these foreign entities could become conduits for money laundering or other illicit operations.

"A financial hub requires heightened scrutiny, and merely applying the law of the land may be insufficient," said Sankhitha Gunaratne, deputy executive director of Transparency International Sri Lanka, an anti-corruption organization. According to her, without proper oversight the Port City could morph into its own jurisdiction beyond the reach of Sri Lankan law and offer a safe haven for criminal proceeds.

Jonathan E. Hillman, a senior fellow and director at the Center for Strategic and International Studies in the U.S., believes that China's opaque lending "provides an avenue for influence."

According to Hillman: "[This] can put pressure on borrowing countries to make additional concessions, such as granting preferred access to natural resources, future government contracts and diplomatic support. Those types of concessions are more likely than asset seizures because they are not as publicly visible and directly connected to specific projects."

In August last year, CHEC's parent company CCCC was blacklisted by the administration of former U.S. President Donald Trump for helping China build militarily strategic islands in the South China Sea, which the U.S. claimed were illegal. Bangladesh blacklisted CHEC in 2018 for allegedly trying to bribe a senior government official when the company was negotiating with Dhaka to expand a major highway in the capital. CHEC has also had its share of corruption scandals in Sri Lanka, including allegations that it funded former president Mahinda Rajapaksa's election campaign in 2015 in his bid for a third term. Investigators linked payments totaling $1.1 million from the Chinese company's bank account to Rajapaksa supporters involved in election work. CHEC denied the allegations, saying it has never been involved in the internal affairs of Sri Lanka.

Meanwhile, Sri Lankan television channel News First reported seeing Chinese men in military-like attire cleaning an old irrigation tank south of Sri Lanka. In response to the report, the Chinese Embassy in Colombo tweeted that camouflage clothing can be purchased online. However, as per Sri Lankan law, wearing or even being in possession of a military uniform when not serving in the military is a punishable offense.

As India remains anxious about China's presence, CHEC Port City Colombo has invited Indian companies and others to invest in the offshore city. Yamuna Jayaratne, director of sales and marketing at the company, said the project is a good play for Indian investors due to Sri Lanka's proximity to India.

"Port City Colombo offers a compelling investment opportunity and the project welcomes investment from anywhere in the world," she said. "Indian investors are welcome to invest and grow their investments through the port city. In doing so, we do believe that it will contribute to bridging any tension."