ANKARA -- Guests from many countries packed onto a platform at the Turkish capital's historic rail station on Wednesday to welcome a freight train on its way from Xi'an in northwestern China into central Europe.

The train was welcomed by signs reading "One Belt, One Road," and "China-Turkey." Some 75 of the well-wishers were from China, outnumbering the contingents from several central Asian nations.

The new route has been made possible by a tunnel -- built by a Japanese consortium -- under the Bosporus, the narrow waterway in Istanbul that separates Asia from Europe. It allows freight to skirt Russia, providing uninterrupted rail passage via Turkey. Previously, locomotives had to take ferries in Istanbul, disrupting the flow of cargo.

Amid tensions with the U.S. and the European Union -- as well as its own economic problems -- Turkey is eager to bolster ties with China. On a trip to Beijing in July, Turkish President Recep Tayyip Erdogan called for further cooperation in areas including transportation, tourism, trade and investment, saying there was "a natural harmony" between Turkey's Middle Corridor Initiative and China's Belt and Road Initiative.

"We are witnessing a historic moment," said Hu Heping, a member of the Central Committee of the Chinese Communist Party and the secretary-general of the Shaanxi Provincial Committee, who led the Chinese delegation in Ankara.

"This freight train coming from China will receive the title of being the first to pass through the Bosporus railway tube tunnel," Hu said. "This journey will contribute immensely to the development of commercial and economic relations between Asia and Europe." 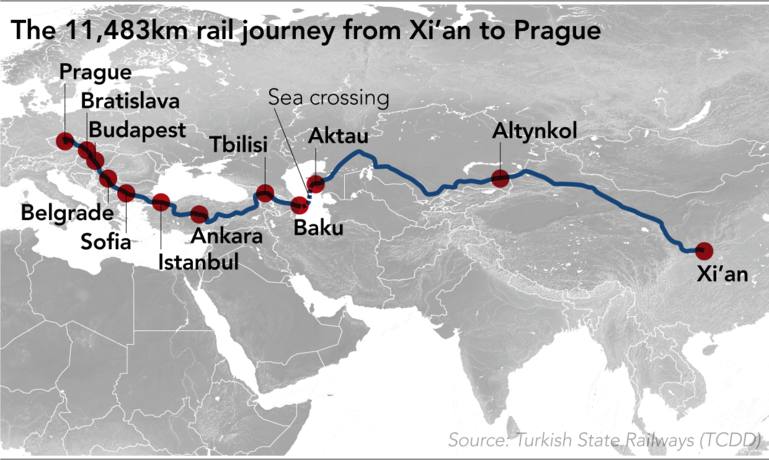 After stopping for the ceremony in Ankara, the China Railway Express freight train -- loaded with 42 containers of solar panels -- entered the Marmaray Tunnel in the early hours of Thursday on its way to its final destination of Prague.

Altay Atli, a lecturer at Istanbul's Koc University who specializes in Turkey-China relations, said railways offer a convenient alternative to longer maritime routes. Nevertheless, he added, the symbolism outweighs commercial viability at the moment as inefficiencies remain, including long waits at some borders and ferry rides on the Caspian Sea between Kazakhstan and Azerbaijan.

"This new route is another effort by China in what I call geopolitical diversification," Atli said. "China does not want to put all of her eggs into the same Russian basket. This line is not meant to replace Russian routes but to diversify so that it will also enhance relations with Turkey and open an alternative to Russian routes."

Ali Ihsan Uygun, the head of Turkey State Railways, told the Nikkei Asian Review that an estimated annual 5 million tons of cargo will use the route by 2023-2025.

Thomas Kargl, who sits on the board of the Austrian rail freight transportation company Rail Cargo Group, made a slightly less ambitious estimation than Uygun. Kargl projects the new route will be able to transport around 500 thousand tons of cargo by 2021, reaching 1.75 millions tons in the following five years. 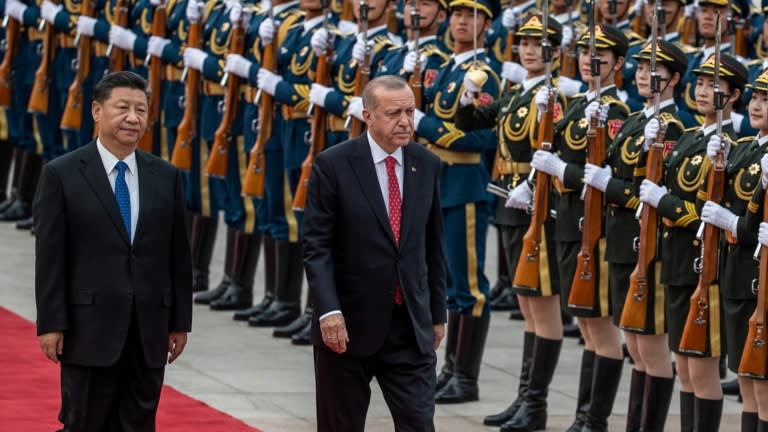 Turkish President Recep Tayyip Erdogan and China's President Xi Jinping inspect an honor guard during a welcome ceremony at the Great Hall of the People in Beijing in July.   © Reuters

The 11,483 km Xi'an-Prague journey is expected to be completed in 18 days. The route takes cargo through Kazakhstan, Azerbaijan, Georgia, Turkey, Bulgaria, Serbia, Hungary and Slovakia; the time it takes is comparable to the trains that pass through Russia.

He added that the route offers a "middle corridor connecting Beijing to London," and that "Turkey has become one of the most important connections along the Iron Silk Road" -- one of the names coined for the new connection.

According to Kargl of the Rail Cargo Group, the new route can be used to take cargo like laptops, hard disks, semifinished TV panels, textiles and auto parts from Asia to Europe. Going the other way will be goods such as powdered milk, frozen foods, pork, pharmacy products as well as finished and semifinished vehicles. Yet, almost ironically, the tunnel under the Bosporus was financed and built by BRI-skeptic Japan. Prime Minister Shinzo Abe even attended the opening ceremony in 2013.

The Japan International Cooperation Agency poured close to 200 billion yen ($1.83 billion) into the project, and Japanese construction giant Taisei led the consortium that built what is the world's deepest immersed tube tunnel -- it sits a depth of 60 meters. The passage has been used by more than 400 million commuters since opening.

The tunnel will exclusively handle passenger traffic during the day, but give way to freight trains from midnight until early morning.

Turkey was enjoying an infrastructure construction bonanza until the lira crashed in the summer of 2018. Massive suspension bridges, high speed railways, tunnels and airports were being built by Japanese, Chinese and South Korean companies after intense bidding.

China's Cosco Pacific and China Merchants Group acquired a large Istanbul port for almost $1 billion in 2015, and Turkey is courting China to finance and build a high-speed railway network throughout the country.

South Korea's Hyundai Engineering & Construction and SK Engineering and Construction in 2016 built a third bridge over the Bosporus that is designed to accommodate a railway. Turkey is planning to add a railway to this bridge.