While rail's share of overall cargo traffic between Europe and China remains tiny -- 1.5% versus 95% for ocean shipping -- transportation industry watchers predict volumes will grow as businesses on both sides seize on the advantages of trains.

Companies poised to benefit include Chinese e-commerce leader Alibaba Group Holding, which seeks better distribution in Europe, and German luxury car brand Porsche, which does not produce cars in China.

"Our predictions for growth are based on our success in connecting more Chinese destinations to our European rail network, which is the largest of any rail network in Europe," said Carsten Hinne, chairman of DB Cargo Eurasia, a business unit formed in late 2018 to reflect the growing importance of Europe-China trains in DB's portfolio.

"Among the other factors are our clients' policies for carbon dioxide reduction, as well as Chinese subsidies under the umbrella of China's Belt and Road Initiative," he added.

China State Railway Group, which is in charge of the services on the stretches within China, is also optimistic on this potential, forecasting 640,000 containers in annual traffic by 2027.

Freight rail's main selling point versus maritime transport is its ability to cut travel time by more than half, with 14-18 days from Germany to China's inland metropolises such as Xi'an, Chengdu and Chongqing, while being significantly cheaper than air transport.

DB has offered regular Europe-China cargo rail services since 2011, when only 900 containers embarked on the 12,000-km journey, carrying mainly high-valued electronics bound for Europe and vehicle parts for various automobile manufacturers to China.

The exchange of goods essentially takes place via two routes: The northern route uses the Trans-Siberian Railway and runs to the north of Mongolia, while the southern route runs through Kazakhstan, Belarus and Russia. The two main transcontinental routes are operated by a group consisting of DB and the respective countries' national railways. 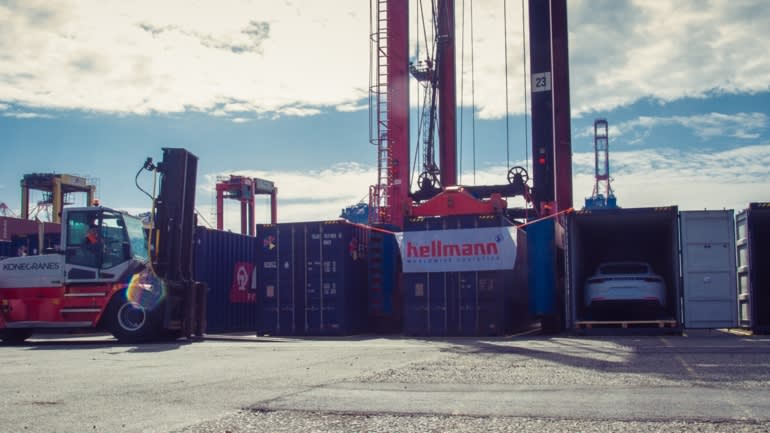 Within its European rail network, DB Cargo offers clients the DBeco plus scheme, in which all the electricity used for the rail transport of a given container is fed into the rail electricity grid on DB Cargo's behalf from renewable sources.

Subsidies for the Europe-China connection are not transparent, but come from Chinese cities as well as provincial and central governments under the umbrella of China's Belt and Road Initiative.

The subsidies since 2011 have reduced the cargo fees for Europe-bound containers by 40% on average, based on surveys conducted in China by the Logistics and Transportation Department of the University of Applied Sciences BFI Vienna. A standard container goes for $4,000, which makes it competitive against sea transportation.

"A lot of people ask what would happen to the cargo trains if China ended the subsidies, but we don't believe that there is an end to the subsidies on the horizon," said Andreas Breinbauer, the department's director.

"From the Chinese government's perspective, one underlying rationale is that the faster cargo rail connections render Alibaba's and Tencent's disadvantage of trailing Amazon in terms of sophisticated distribution logistics in Europe insignificant, as it brings the European consumer faster to the Chinese e-commerce system," he added.

The lack of parity in the numbers of containers heading east versus west remains a headache, with operators assessing the ratio between eastbound and westbound cargo volume at 30:70.

However, the gap appears to be narrowing, not least because German automakers are warming to the idea of sending cars to China.

Daimler and BMW are running pilot programs, and BMW as well as Audi for years have used rail for transporting parts and components from their respective German plants to their factories in China.

Since April, Porsche has a contract with Germany-based Hellmann Worldwide Logistics for more than 8,000 cars per year, with around 1,000 cars shipped by now.

Unlike many other European automakers, Porsche does not manufacture in China, instead transporting over 80,000 cars to China via sea cargo in 2018.

Hellmann transports the Porsches by placing two of them on a wooden pallet per container to reach Chongqing via Poland, Belarus, Russia and Kazakhstan.

"When a Chinese consumer decides to spend a lot of money on a new Porsche, he wants to drive the car as soon as possible, and we are consequently noting that the number of Chinese Porsche vendors opting for rail delivery is growing," said Matthias Magnor, Hellmann's chief operating officer for road and rail.

"This applies especially to China's western and central provinces, as it takes a long time for an ocean container to reach them," he added.

Magnor said transport damage to luxury cars is much less an issue if carried by rail than by ship, where cargo is subject to gravitational forces when in turbulent seas.

Given Porsche's status as "a beacon" of automobile sophistication, he said, the increased transportation of these vehicles by rail will be seen by other European companies as proof of feasibility -- boosting trust and, in turn, demand for the China-bound rail cargo.