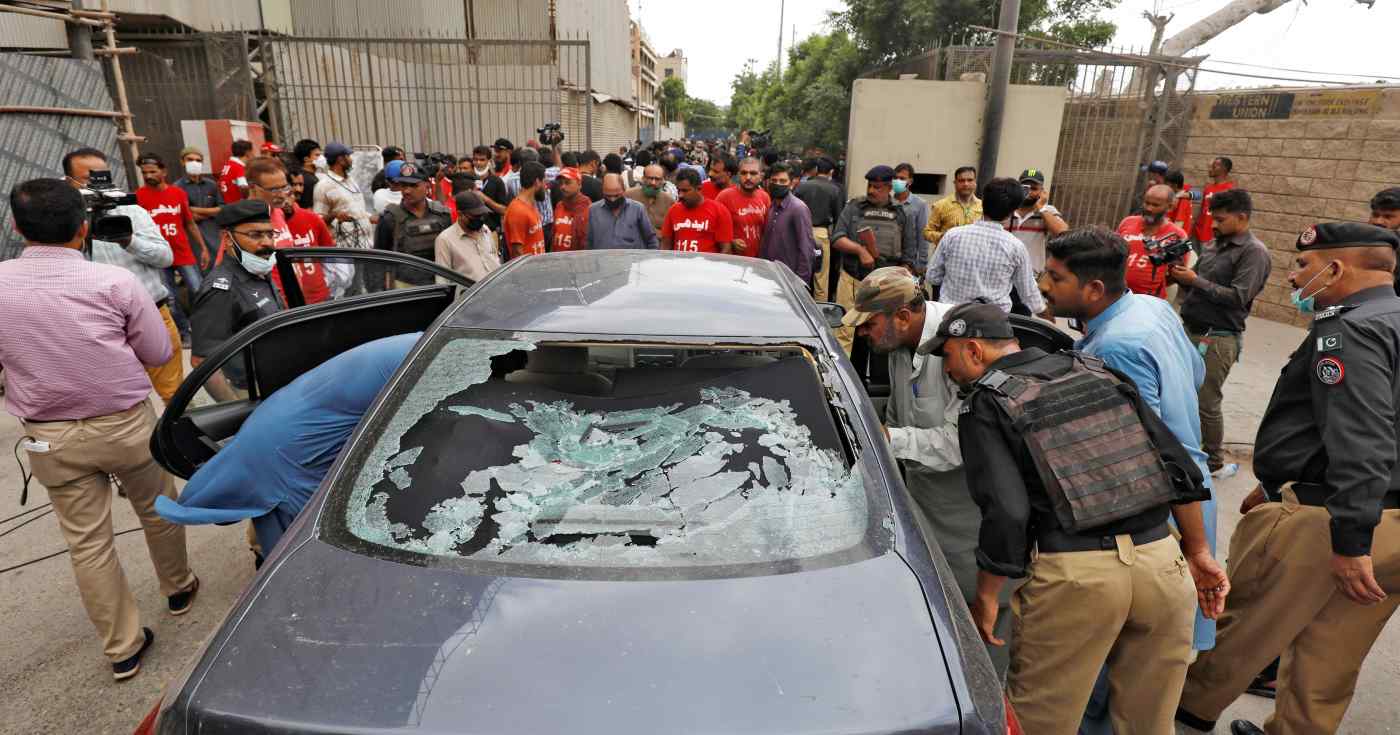 QUETTA, Pakistan -- Four gunmen of the Baloch Liberation Army armed with grenades, automatic rifles and explosives were killed in an attack on the Pakistan Stock Exchange on Monday morning.

The assailants from the BLA, which opposes China's Belt and Road projects, also had a hidden cache of food and supplies, hinting at a possible hostage scenario, according to police.

The attackers failed to break through the main door of the exchange and were gunned down by security personnel guarding the compound.

During the assault, trading on the PSX continued without interruption, Sulaiman S. Mehdi, chairman of the PSX board, told local media.

The attack was widely condemned in the country. Murad Ali Shah, chief minister of Sindh Province, where the attack took place, said in a statement: "Anti-state elements want to take advantage of the virus situation." This image made from a video shows the exterior of stock exchange building in Karachi, Pakistan, which was attacked by militants on Monday.   © AP

China swiftly condemned the attack on the stock exchange in Karachi and expressed its support for Pakistan.

"We firmly oppose any form of terrorism and firmly support Pakistan's efforts in combating terrorism and upholding national security and stability," Chinese Foreign Ministry spokesperson Zhao Lijian said during his regular briefing while responding to a question about the attack.

Experts have linked the raid to other attacks by the BLA on Chinese interests in Pakistan, including the China-Pakistan Economic Corridor, part of Chinese President Xi Jinping's Belt and Road Initiative.

Fakhar Kakakhel, a senior journalist covering militancy in Pakistan, said the PSX was selected as a symbolic target for Pakistan's economy and its close links to the economic corridor.

"Attack on PSX was meant to give the impression that Pakistan is not safe for foreign investment," he said.

In December 2016, a consortium of Chinese investors -- Shanghai Stock Exchange, Shenzhen Stock Exchange and China Financial Futures Exchange -- launched a bid to buy a 40% share in the PSX. The $85 million deal concluded in 2017.

Majeed Brigade of the BLA claimed responsibility for the attack in a statement sent to media via email. BLA is one of the oldest -- and arguably largest -- of at least six insurgent groups fighting for Balochistan independence. The group was designated a terror outfit by the U.S. State Department in July 2019.

In May 2019, the BLA warned China of dire consequences if Beijing did not quit CPEC projects in Balochistan. In a video statement released then, the group warned that attacks on Chinese interests in Pakistan would continue if China did not quit Balochistan.

The BLA has been responsible for several attacks on Chinese interests in the country. In November 2018, the group claimed responsibility for a raid on the Chinese consulate in Karachi that killed four people. In May 2019, it attacked the Pearl Continental Hotel in Gwadar, centerpiece of the CPEC, killing five.

The attack on the PSX was possibly meant to hurt the economy, which has been struggling due to the pandemic. Gross domestic product is projected to be an anemic 1% for the fiscal year starting July by both the World Bank and International Monetary Fund.

But Omar Ahmed Bukhari, director general of the Sindh Rangers -- a paramilitary force -- alleged the attack was linked to India. During a news conference, he blamed Indian spy agency Research and Analysis Wing as a possible perpetrator.

"Straightaway, I can assure you that this terrorist incident cannot have taken place without [the assistance of an] external agency. And among them, RAW's frustration is apparent to all of you," he told journalists.

Some experts also link the BLA to India, which may have encouraged the group to carry out the latest attack in retaliation for recent Chinese aggression in the Ladakh region.

Michael Kugelman, deputy director of the Asia Program at the Woodrow Wilson Center in Washington, said it is worth taking stock of this attack against the broader backdrop of the Ladakh border crisis, with India under strong domestic pressure to develop retaliatory options against China.

"Is there a smoking gun that New Delhi had a role in sponsoring this attack by the BLA? Certainly not," he said. "But should an Indian hand be ruled out? Not at all."