HONG KONG -- An event promoting Beijing's Belt and Road infrastructure initiative was held in Hong Kong on Wednesday, as protests continue over mainland China's growing clout over the city.

This is the fourth Belt and Road Summit to be hosted by the Hong Kong government. China International Capital and HSBC were among the attendees.

More than two decades after Hong Kong was handed over to China, the city is being outshined by booming mainland metropolises like Shenzhen, China's Silicon Valley. Hong Kong's government and business elites are eager to bolster economic ties to the mainland, and to tap demand for financial services and insurance tied to the Belt and Road effort. 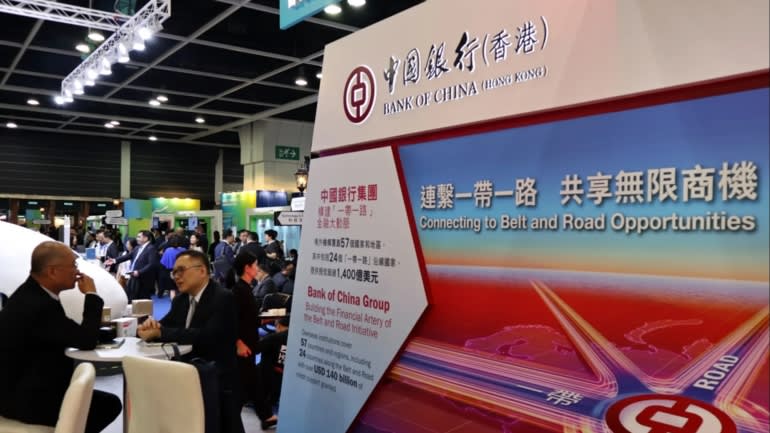 Bank of China's booth at the Belt and Road Summit in Hong Kong on Wednesday. (Photo by Takeshi Kihara)

About 30% of respondents thought Hong Kong would benefit from the proposal to turn the city, Macao and the mainland's Guangdong Province into a giant metropolitan area, according to a March survey by the Chinese University of Hong Kong.

Meanwhile, 45% were concerned that this would further blur the line between Hong Kong and the mainland.

Fitch Ratings recently downgraded Hong Kong for the first time in 24 years to AA from AA+. "The gradual rise in Hong Kong's economic, financial, and sociopolitical linkages with the mainland implies its continued integration into China's national governance system, which will present greater institutional and regulatory challenges over time," the agency said in a statement.