COLOMBO -- Maldivian leader Abdulla Yameen is banking on his economic achievements bankrolled by China to win a second term at the Sept. 23 presidential polls, but he is under close scrutiny by the European Union and the U.S., which have threatened to impose sanctions if the election is found to be neither free nor fair.

During Yameen's island-hopping campaign that has been kept away from the idyllic beach resorts that attract high-end tourists, he has been drumming up a message around his record of delivering economic development: nearly 2,800 projects costing $5.7 billion have been completed since he came to power in 2013, according to official reports.

The most visible is the Chinese-Maldives Friendship Bridge, the first cross-sea link in the country and built with aid from Beijing is part of Chinese President Xi Jinping's ambitious Belt and Road Initiative.

It was opened with fanfare and fireworks at the end of August in time for Yameen's campaign. This iconic 2 km bridge connects the capital Male to the neighboring island of Hulhule, site of the country's main international airport.

With this recent opening, Yameen was able to point to his tangible achievements versus the opposition alliance's strident clamor for democracy, framing the choice starkly for voters in the tiny country of 400,000. 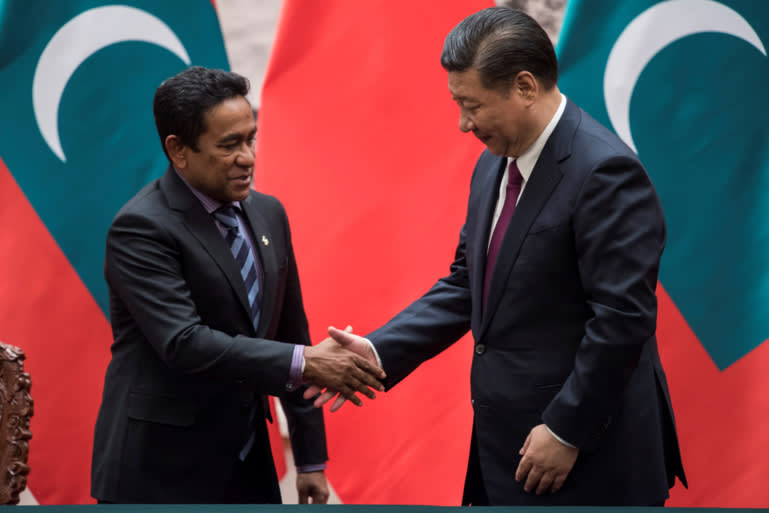 "Go and study how much money we have got for the development of the Maldives from those who raise their voice to bring democracy," he told voters during a trip through the country's south. It was a dig at opposition candidate Ibrahim Mohamed Solih and the Western governments that Yameen said are allies of the pro-democracy camp.

Yameen's combative tone is raising the political temperature in Colombo, from where Western diplomatic missions keep an eye on the two South Asian nations. Western diplomatic sources in the Sri Lankan capital told the Nikkei Asian Review that they do not expect Yameen to get off lightly if he secures a win on the back of a growing list of pre-election irregularities and brazen intimidation of opposition critics into silence.

Yameen's political allies and cronies who stand to profit from an unfair election are also in these diplomatic crosshairs. The first hints of that emerged in July, when the European Council, the political arm of the EU, approved a framework for targeted sanctions if the Yameen regime did not end oppression of the opposition and stop human rights violations ahead of the poll.

Then in August, a delegation of European parliamentarians on a visit to the Maldives revealed that 41 of Yameen's allies were on a list for targeted sanctions that will range from the freezing their European assets to a European travel ban.

"Your names will be shared globally; there will be nowhere to hide. Yameen's only loyalty is to power and greed," Ryszard Czarnecki, one of the European parliamentarians and a Polish politician, said on that occasion.

But that did not compel Yameen to change tack. He soldiered on even after the U.S. government weighed in with its own diplomatic stick. The U.S. "will consider appropriate measures against those individuals who undermine democracy, the rule of law, and a free and fair electoral process," the Department of State warned the Yameen regime early September.

"The United States is concerned about continued democratic backsliding in Maldives," it added, referring to the political climate ahead of the election.

Yameen presents a formidable challenge to the opposition, whose most charismatic figure, Mohamed Nasheed, the country's first elected president, was forced into exile. Nasheed won a landmark election in 2008, ending the 30-year rule of Maumoon Abdul Gayoom, whose presidency was marked by oppression. But the tables have now turned, after Gayoom, a half-brother of Yameen, was arrested early this year for closing ranks with Nasheed to mount a challenge against Yameen.

The opposition's fears of an "election farce" have grown in light of the onslaught the regime has unleashed. By mid-September, 18 opposition activists had been arrested, pro-opposition media have been hounded and fined and opposition campaign material rubbed clean off the streets.

Earlier in the year, two Supreme Court judges who delivered a ruling in February against the convictions of nine opposition leaders were thrown in jail. Yameen imposed a 45-day emergency soon after to crush further challengers to his iron grip.

Fearing a rigged election, the government's critics are questioning the credibility of the supposedly independent Election Commission, the final arbiter on the outcome of the poll. It follows politically motivated flip-flops for voter registration and new requirements to enable citizens to vote.

"The election commission's newly appointed chairman is a Yameen political ally," Mariyam Shiuna, executive director of the Maldivian arm of Transparency International, the global anti-graft watchdog, told Nikkei. "He has been seen campaigning for Yameen and has made statements at the time that he will destroy the opposition."

Yameen's critics said that China's financial backing as an extension of BRI has emboldened him. According to one estimate, three of the largest Chinese-funded infrastructure projects, including the Chinese-Maldives Friendship Bridge, are estimated to cost $1.5 billion, a massive sum for a $3.6 billion economy.

It has raised fears that China is luring the Maldives into a debt trap. The opposition has pounced on this Chinese debt, which they say could be as high as $2 billion, to accuse Yameen of mortgaging the Maldives to China. But an Asian diplomat in Colombo dismissed such arguments as "fearmongering."

How much this fear resonates with voters will be determined on Sunday's poll. Western diplomats do not expect Yameen to take a gamble with his political fortunes, because estimates vary of his support among the country's voters.

"There is one estimate that places his support as low as 30%," revealed one diplomat, "which explains the intimidating tactics [he has employed] against the opposition to secure a win."