KARACHI -- Pakistan's plea last month to China for Belt and Road Initiative debt relief has opened the floodgates for other participating countries to make similar appeals as the impact of the coronavirus slams friendly economies with traditionally close ties to Beijing.

Islamabad sought the extension of a debt repayment period on $30 billion in loans for the China-Pakistan Economic Corridor, or CPEC, the flagship project in the massive BRI infrastructure-building program. China agreeing could save Pakistan around $500 million in annual cash flow.

"Pakistan looks forward to Chinese support in dealing with this unprecedented situation arising out of this pandemic," Abdul Hafeez Shaikh, the finance and revenue adviser to Prime Minister Imran Khan, said in a statement, referring to the debt relief request.

Now, many countries in Asia and Africa participating in the BRI -- sometimes styled as a modern version of the ancient Silk Road and a key pillar of China's strategy of expanding its global influence -- have requested China provide similar help.

Mohan Malik, a professor of strategic studies at the National Defense College of the United Arab Emirates, said that from Beijing's perspective, Pakistan is not only an important ally, but the CPEC is also too significant to be allowed to fail. "Should Pakistan's economy go under without a financial rescue package, it would deal a major blow to President Xi Jinping's signature initiative," he told Nikkei Asian Review, referring to the BRI.

Malik added that the collapse of economies in friendly BRI countries amid the pandemic and the resultant sociopolitical instability would jeopardize China's foreign policy goals and damage Xi's political legitimacy. "For long-standing allies like Pakistan, Cambodia, Laos, Djibouti, and Sri Lanka, China is likely to provide some debt relief by either reducing loan interest rates or suspending interest payments in favor of principal-only payments," Malik added. 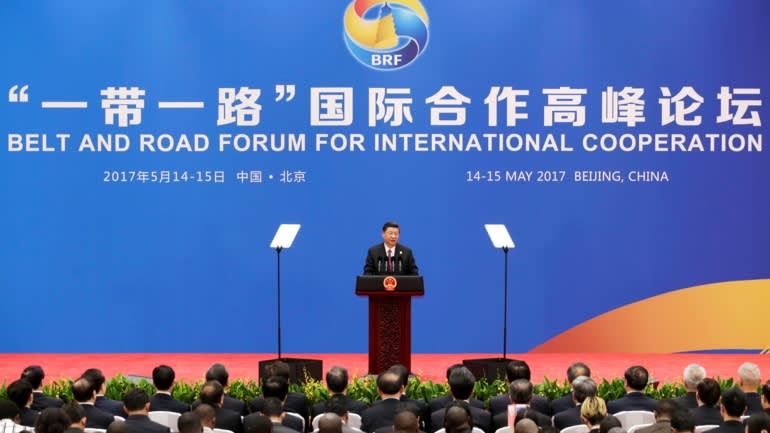 Chinese President Xi Jinping attends a news conference at the end of the Belt and Road Forum in Beijing, China in May 2017.    © Reuters

Experts believe that China has no choice but to provide the requested debt relief to protect its larger BRI projects.

Andrew Small, a senior transatlantic fellow at the German Marshall Fund of the U.S., thinks that Beijing will have to provide some form of debt assistance, the only question being what kind. "[Beijing] has already accepted the freeze on repayments from least-developed countries but [it is] facing pressure to take more comprehensive steps rather than conducting a vast series of bilateral negotiations," Small told Nikkei.

He argues that China being the origin of the coronavirus also compels it to help its allies. "[The current economic crisis] is a shock that stemmed from the Chinese government's own failings, so Beijing is even more politically on the back foot than it would be if the virus didn't have its origins in China," he said.

Nevertheless, providing general relief to all Belt and Road countries is not seen as feasible. Malik said that China will adopt a selective, case-by-case political approach to debt relief instead of offering blanket assistance for all BRI projects worldwide.

Pakistan's economy is taking a hit due to the COVID-19 crisis. According to the latest country report by the Economist Intelligence Unit, Pakistan's GDP is set to contract by 1.6 percent in the 2019-20 fiscal year. Concerned about worsening economic conditions, the government on Saturday eased coronavirus lockdown restrictions, even as the total number of infections crossed the 30,000 mark with 661 deaths.

In response, Pakistan has also requested that G-20 countries provide debt relief, which could potentially result in the deferment of $1.8 billion in obligations for a year, Hafeez Shaik, a government adviser, was quoted as saying after a Ministry of Finance meeting. Pakistan has also secured a loan of $1.386 billion from the International Monetary Fund and another of $305 million from the Asian Development Bank.

In such a context, Krzysztof Iwanek, head of the Asia Research Centre at War Studies University in Warsaw, argues that Beijing agreeing to payment delays would give Pakistan short-term financial breathing room.

But Iwanek cautions against expecting significant debt relief from China. "[Beijing] may cancel some of [the] lesser value [loans] and allow Islamabad to defer some of the payments, at best, " he told Nikkei.

The German Marshall Fund's Small, meanwhile, said that China accepting Pakistan's request would underscore the reality that it can't aggressively push the CPEC projects. "[China] has largely figured out the terms of what a slimmed-down CPEC would look like and the current situation doesn't make it easier to deal with any of the continued obstacles," Small said.