KARACHI -- A regional government in Pakistan says it is open to funding from Japan for an urban railway after funding for the project under the China-Pakistan Economic Corridor, or CPEC, hit a snag.

On Tuesday, Skindar Sultan Raja, head of Pakistan's state-owned railway operator, told the Senate Standing Committee on Railways that the regional government of Sindh is willing to take a loan of $2.6 billion from the Japan International Cooperation Agency, JICA, to refurbish the Karachi Circular Railway, or KCR.

Frustrated by a lack of support from China for the project, Sindh officials are looking to Japan. If the JICA loan comes through, it would be the first case where a Japanese entity takes over the funding of a China-Pakistan Economic Corridor project. This could strengthen the impression that CPEC is being scaled back. Experts believe it is beginning to dawn on Pakistani leaders that the much ballyhooed corridor may bring fewer benefits than expected.

"The Sindh government's shift from China to a loan deal from Japan for the KCR project shows that Pakistan is suffering from buyer's remorse," said Mohan Malik, a professor at the Asia-Pacific Center for Security Studies in Hawaii. The economic burden of Chinese infrastructure projects, coupled with the potential loss of sovereign control, has clearly dampened enthusiasm for the for the corridor in Pakistan, Malik said.

The Karachi Circular Railway served commuters in Pakistan's largest metropolitan area from 1969 to 1999. In 2010, JICA began a three-year survey to assess the feasibility of reopening the loop line. The Japanese aid agency had offered a 40-year loan at a 0.2% interest rate to fund the project, but it was stymied by administrative delays.

Then, in December 2016, the Karachi Circular Railway was incorporated into the China-Pakistan Economic Corridor by the Joint Cooperation Committee, co-chaired by Pakistan and China. The Orange Metro Train Lahore project was also included.

But the Karachi railway project stalled at the next step, where the Sindh government and the Chinese companies involved in the project were supposed to sign off on specific terms. This means the railway is not yet officially executed as part of the key railway project in the Pakistani portion of the Belt and Road Initiative. The Belt and Road is Beijing's vast building program that aims to connect China to Central Asia and Europe.

The 43 km Karachi railway is expected to carry 700,000 passengers a day when operational. Given its importance to the city, the chief minister of Sindh, Murad Ali Shah, repeatedly asked for the project to be funded under the China Pakistan Economic Corridor. 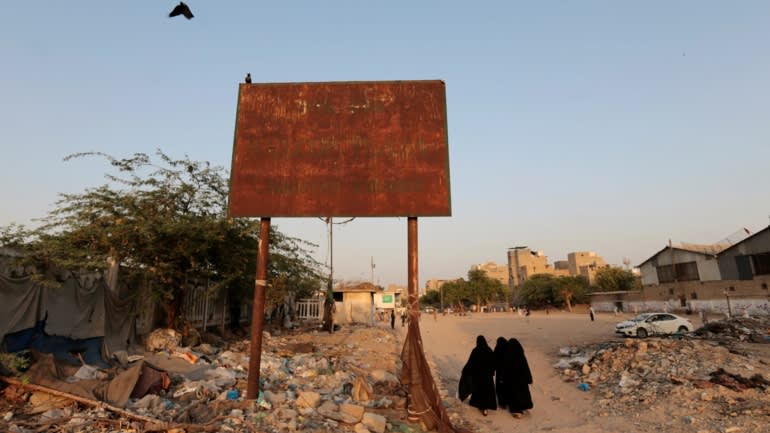 Women walk through land belonging to Pakistan Railways outside the abandoned Nazimabad Station in Karachi: Nazimabad was once a stop on the now-disused Karachi Circular Railway.   © Reuters

In September, Shah asked the Chinese consul general in Karachi, Wang Yu, to expedite funding for the railway as part of the corridor, and sought Yu's help in persuading Beijing to help make the Karachi loop line a reality.

But they made little headway, so Sindh officials turned again to JICA for funding. Experts believe the main reason they are looking to Japan is the low cost of its loans. While it is unclear how much Chinese loans under the corridor will cost, Pakistan Railways' Raja confirmed to the Senate committee that JICA's loan terms are more favorable than China's.

The Asia-Pacific Center for Security Studies' Malik said that JICA infrastructure loans usually come at a much lower interest rate than those from China. They "also generate local employment opportunities and do not require sovereign guarantees or collateral," Malik said.

Others are more broadly skeptical of government-to-government loans. Hasaan Khawar, an Islamabad-based public policy analyst, believes that obtaining loans on the open market will always result in more generous terms than bilateral loans. "In international competitive bidding, there are higher chances of getting more competitive [loans], as compared to bilateral arrangements."

The Sindh government wants to engage JICA on the project, but a deal has not been reached yet. JICA has not made any decision or official commitment on Karachi Circular Railway, Masanosuke Sakaki, a JICA official told the Nikkei Asian Review. "The Government of Japan, including the Ministry of Foreign Affairs and the Ministry of Finance, has the full authority to make such decisions," Sakaki said.

Khawar says, meanwhile, that there have not been any significant developments regarding the corridor lately. "[It] definitely doesn't seem to be that high on the priority [list] for this government, despite the fact that there has been the talk of creating a CPEC authority and Phase-II of CPEC, covering socio-economic cooperation."