ISLAMABAD/KARACHI -- After months of uncertainty over the future of China's largest investment in Pakistan, part of China's Belt and Road initiative, Islamabad is trying to push the projects forward.

The projects are part of the China-Pakistan Economic Corridor. The Pakistani government has already replaced the minister in charge of the projects with someone more to China's liking.

In addition, Pakistan is trying to guarantee that the projects, if completed, will generate enough revenue to pay off what could be $60 billion in China-held debt. To this end, Islamabad is pitching the corridor to Iran, Saudi Arabia and other countries that might benefit from faster trade routes into and out of China.

Abdul Hafeez Shaikh, the prime minister's adviser on finance -- a position that makes him the de facto finance minister -- on Nov. 18 renewed the country's Belt and Road commitment and spelled out his future strategy to keep Pakistan from stumbling under the debt load. For the first time, he said the success of the CPEC rests on Pakistan persuading some of its neighbors to join the huge undertaking.

"There is no change in CPEC-related plans," Shaikh said to a small group of journalists including the Nikkei Asian Review. The entire corridor "is a very important project for Pakistan. It's the 'CPEC-plus,' which is where the future lies. Other countries have to utilize the facilities to take this [project] forward."

It was also the first time for Shaikh to use the phrase "CPEC-plus," which is shorthand for an infrastructure-building scheme that brings aboard countries in addition to Pakistan and China. 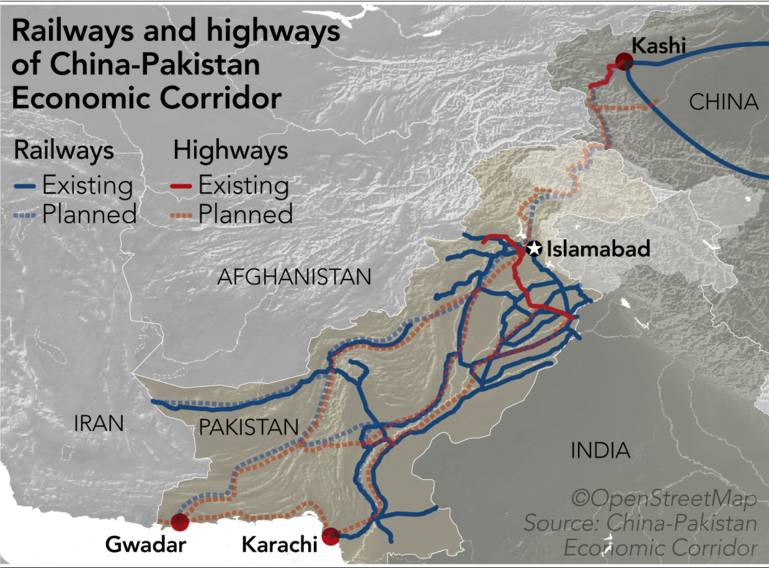 Pakistan will offer the land that the corridor -- a series of railways and highways -- will sit on so it can serve as a trade route between China and countries like Saudi Arabia, the UAE and Iran, a senior government official with firsthand knowledge of the plans told the Nikkei Asian Review. This land route from Gwadar, a city on the coast of the Arabian Sea, to China's western Xinjiang Province would be much faster than shipping goods by sea.

"We need all the revenue we can get to make this project financially feasible," the senior official said. "Just Pakistan on its own cannot generate the revenues to afford the huge debt, which will come if all the CPEC-related projects are undertaken."

On Nov. 20, Makhdoom Khusro Bakhtiyar, the planning and development minister, was replaced. This decision came two weeks after the corridor's Joint Cooperation Committee met in Islamabad. As planning and development minister, Bakhtiyar co-chaired the meeting along with Ning Jizhe, the vice chairman of China's National Development and Reforms Commission. The meeting failed to draw additional financial commitments from China.

Sources privy to the matter have confirmed that China demanded changes at Pakistan's planning and development Ministry. Chinese officials have repeatedly voiced their dissatisfaction with Bakhtiyar and had demanded his removal, the sources said.

Bakhtiyar was replaced by Asad Umar, who served as Pakistan's finance minister from August 2018 till April this year. He was removed from the finance ministry because, reportedly, he did not agree with the terms and conditions of Pakistan's proposed IMF bailout.

China also has demanded that Pakistan replace its minister for communication and railways. The role of these ministers is important due to the Main Line-1 railway project as well as highway construction undertakings. Both of the ministers on China's hit list are close to Prime Minister Imran Khan.

Pakistan's moves to free itself from the current CPEC inertia come as China has turned chilly toward the series of big infrastructure projects. 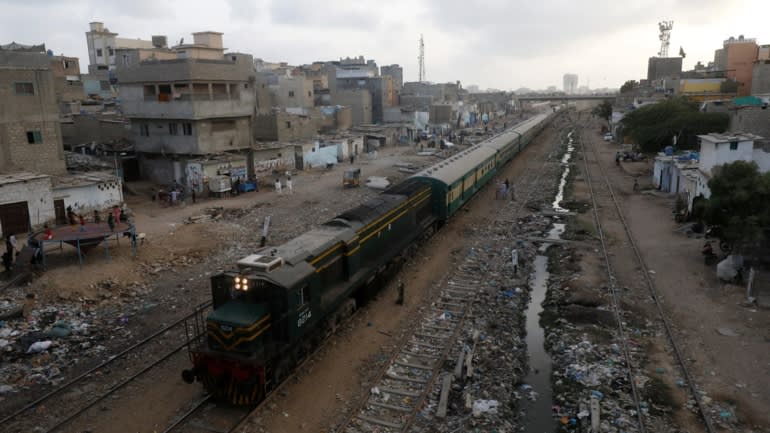 A passenger train moves along a neighbourhood in Karachi.   © Reuters

Since the IMF in July formally approved a $6 billion loan to help Pakistan avert a balance of payments crisis, analysts have warned that Islamabad will have to scale down its planned corridor investments if it is to manage its current account and fiscal deficits. The corridor previously was estimated by the government to carry a price tag of at least $60 billion, once all of its projects are completed.

Earlier, Pakistan scaled down some of its corridor-related financial commitments for the current fiscal year through next June.

Zubair Khan, a former commerce minister and now an independent commentator on economic matters, told Nikkei that Pakistan persuading its neighbors to use the corridor will not be enough. He said the added traffic would raise revenue and ease Pakistan's debt load but added that if the nation is to pay off corridor-related debt it will have to earn more from exports.

"The first priority for the government," Zubair Khan said, "must be to build up exports, which have remained stagnant for many years. There is no guarantee on how many other countries will enlist in the CPEC and how much revenue will come from them. This has to remain primarily a project for Pakistan."

Moreover, Western diplomats said, Pakistan's future CPEC partners will have to include India -- the largest economy in South and Central Asia -- if corridor revenues are to be substantially lifted. But since gaining their independence in 1947, India and Pakistan have used the border they share to turn a cold shoulder toward the other.

"If Pakistan wants to turn this [initiative] into a regional project of some kind, India will be a prime candidate, with the size of its economy," a Western diplomat in Islamabad said, speaking to Nikkei on condition of anonymity. "India will have a strong interest in joining CPEC and having access to Central Asia. But right now, relations [between India and Pakistan] are so tense that it is hard to imagine them cooperating."

Giving China the ministers it wants could please Beijing to some extent.

Mohan Malik, a South Asia analyst, believes CPEC is the Belt and Road's flagship project, the failure of which would bode ill for China's grand strategy in general and China-Pakistan relations in particular. Malik says these considerations explain why Beijing is exercising enormous influence over Islamabad's domestic and foreign policymaking.

Referring to Asad Umar, the new planning and development minister, Malik said that it makes perfect sense for China to have its own man in Islamabad take charge of CPEC projects. "Asad Umar's pro-China and anti-West views," Malik said, "make him an ideal candidate."