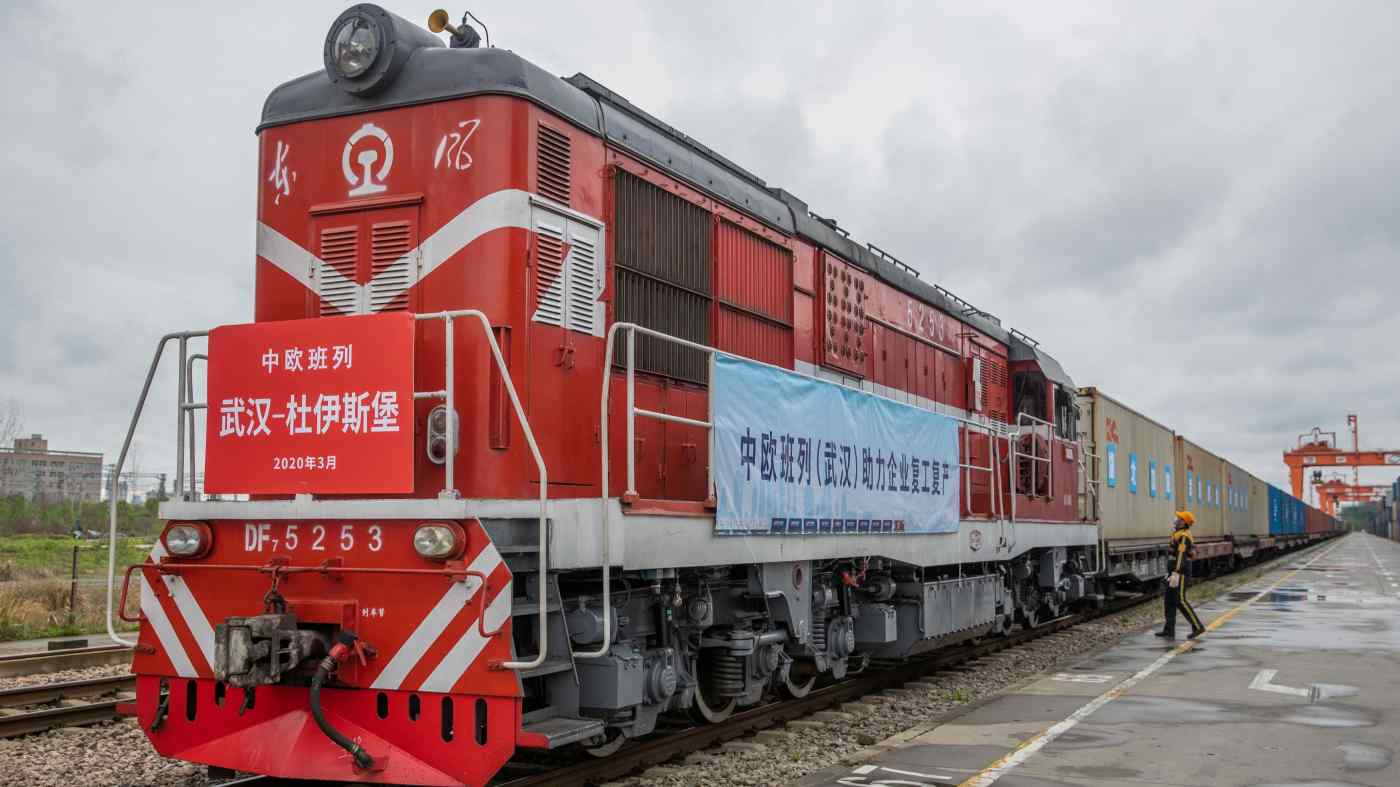 TOKYO/CHONGQING, China -- What began as a 19th century mode of transportation to deliver 21st products -- delivering laptops built in China to European markets on trains -- has evolved into a vital cargo link between the two continents.

And the major disruptions to maritime and air logistics chains due to the coronavirus pandemic has only accelerated the importance of China Railway Express as a cheaper and quicker alternative to ship everything from cars to household goods from China to Europe.

The railway, which first began operating roughly a decade ago, has now become the backbone of China's Belt and Road infrastructure initiative. Still, cooling ties between China and Europe over Xinjiang and other issues loom heavy over the trade.

Chinese logistics provider SF Holding began chartering cargo planes from Japan to carry electronics parts and household items to various destinations in China. Once the goods arrive, they are loaded onto freight trains headed to Europe on the China Railway Express.

The company used to depend on outside freight operators for shipments between Japan and China. But it decided it needed its own dedicated flights with demand expected to rise. It now charters one to five flights a week on four routes, including between Osaka and the Chinese cities of Shenzhen, Wuhan and Changsha.

Combining air and rail service means faster and cheaper shipments. Shipping goods from Japan to Europe by sea would normally take about 40 days. But flying them to Changsha or Xi'an, then loading them on the China Railway Express, takes 20 to 30 days and less than half the cost of flying them the entire way. SF Holding plans to take even greater advantage of the rail link in the future.

Meanwhile, Japanese global logistics company Nippon Express leases space on the China Railway Express to transport appliances, auto parts and other products made by Japanese and European companies in China to Europe.

By the end of March, it plans to offer 25 shipping routes that use the rail link including from Shandong and Guangdong provinces, up from its current 17 that originate from Jiangsu and Shaanxi provinces. It aims to operate one to five regular weekly shipments to Europe, to such destinations as the German cities of Duisburg and Hamburg.

Nippon Express also added seven new routes to Europe via Ukraine and Russia toward the end of last year. "We will consider adding even more routes if necessary," a company representative said.

The companies' increasing focus on the China Railway Express comes amid a global upheaval in logistics chains.

Demand for cargo has surged in the U.S. and Europe as consumers stuck at home over the coronavirus pandemic turn to online shopping. Maritime container shipments from Asia to Europe jumped 71% on the year in February to roughly 1.16 million twenty-foot containers, according to the Japan Maritime Center.

But the pandemic also led to a shortage of port workers, which in turn delayed the unloading of cargo. The sudden flood of incoming shipments that had been delayed when the Suez Canal was blocked in March is only adding to the turmoil.

Airfreight capacity on passenger flights has decreased as well, with many flights canceled due to plunging demand from the coronavirus.

Maritime shipping rates from Shanghai to Europe came to $5,887 per 20-foot container this month, according to the Shanghai Shipping Exchange -- a roughly 570% increase from a year earlier, and the highest figure since the exchange began tracking the data in 2009.

Spot airfreight rates from Hong Kong to Europe were also roughly 60% higher from a year earlier in June, according to the TAC Index.

Faced with these challenges, the China Railway Express is quickly transforming into a major artery for trade between China and Europe.

The Alataw Pass, on the border of China's Xinjiang region and Kazakhstan, has recently seen more than 10 trains pass through every day. The customs office there processed 1,918 trains in the January-April period carrying a total of over $10 billion in merchandise -- an increase of 57% and 81% on the year, respectively.

Traffic across the entire railway surged 75% on the year to 3,398 trains in January-March, after topping the annual record in 2020 with 12,406 trains, according to the China State Railway Group.

Service on the China Railway Express began in March 2011 as part of efforts by Bo Xilai, then the party secretary for Chongqing and rival to Chinese President Xi Jinping, to court HP to set up a computer factory in the city.

After Bo's fall from power, Xi in 2013 positioned the China Railway Express as a core component to the Belt and Road initiative. The railway now transports goods from over 50 cities across China, including three main hubs in Chongqing, Chengdu and Xi'an, to roughly 150 cities across 22 European countries. Thanks to new tracks and shorter customs procedures, shipments from Chongqing to Germany take 12 to 13 days instead of the initial 16.

Computers made up the majority of cargo carried on the railway in its early days, especially with Chongqing at one point producing as much as a third of all laptops worldwide. But as more companies recognize the advantages of the railway, the list has expanded to include electric cars, appliances, cotton thread and lumber from China, as well as Porsches and other luxury cars from Europe.

The railway has also become a key component to many Chinese businesses' strategies. In January, Midea Group became China's first appliance maker to start operating its own train on the link from Guangdong to export kettles and dishwashers. It reportedly has cut shipping times to Moscow to 15 days, a third of what it used to take by sea.

Chinese media report that TV maker TCL is expanding its plant in Chengdu, a stop on the railway.

Still, China's shifting relations with Europe loom heavy over such plans. The European Union is increasingly concerned by alleged human rights abuses against China's Uyghur minority in Xinjiang, among other issues, and suspended the ratification process for an investment treaty with China. Protracted tensions could impact trade between the two sides.