Factions regroup under an al-Qaeda umbrella with foothold near Xinjiang Pakistani troops arrive to repel an attack on an air force base in Peshawar in late 2015.   © Reuters
ZIA UR REHMAN, Contributing writerSeptember 8, 2020 15:04 JST | Pakistan
CopyCopied

PESHAWAR, Pakistan -- As peace negotiations between the Afghan Taliban and the government in Kabul continue, Pakistan's leading Taliban group, which operates from Afghanistan, has announced the reunification of various breakaway factions.

Analysts believe this will cause internal security problems for Pakistan and also raise threats to projects linked to China's Belt and Road Initiative (BRI) in the country's northwest.

"In Khyber Pakhtunkhwa province's various remote areas, several Chinese development projects, mainly in the field of hydro-electricity generation and infrastructure, are going on," an Islamabad-based security official told the Nikkei Asian Review on condition of anonymity. "The Pakistan Taliban's recent reunification has increased concerns about the safety of Chinese nationals and projects."

The Jamaat-ul-Ahrar, the Hizb ul-Ahrar, and Hakeemullah Mehsud group were the three major factions in the Tehreek-e-Taliban Pakistan (TTP) until they splintered in 2014 over leadership issues. Last month, it was announced they were all getting back together, and also being joined by a faction of Lashkar-e-Jhangvi, a banned sectarian group that operates in the western province of Balochistan.

As a strong ally of al-Qaeda, the TTP became an umbrella organization for militant groups after its formation in December 2007 and has been involved in numerous terror attacks. 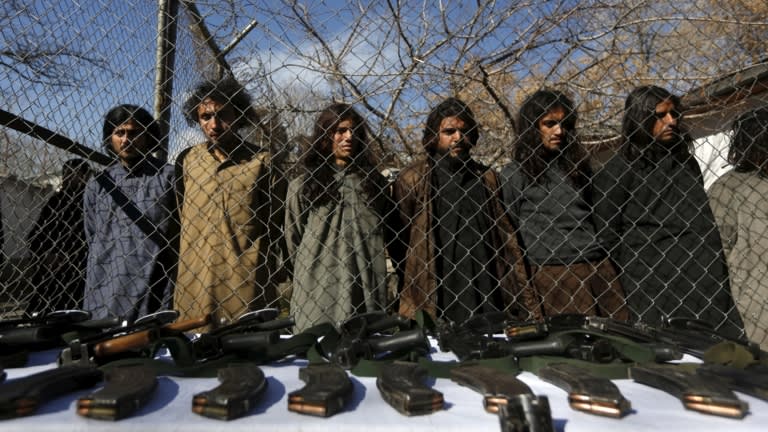 Pakistani Taliban fighters arrested by Afghan border police were paraded before the media with their weapons in Kabul in January 2016.    © Reuters

The TTP started out in Pakistan's northwestern Khyber Pakhtunkhwa province and in semi-autonomous tribal areas bordering Afghanistan. The terror group later expanded into other parts of the country, but was countered by a massive military operation launched in June 2014. The offensive shattered the TTP's command and control structure in tribal areas and forced the group to take sanctuary over the border in Afghanistan.

The rapidity of the TTP's reunification has surprised many. Analysts believe the various TTP splinters recognized that they would no longer be viable alone in a changing Afghanistan. In order to meet its peace talk commitment to stop harboring foreign militants, the Afghan Taliban would no longer be able to shelter the TTP.

"The self-realization of the threats for its survival in the changing political landscape of Afghanistan, and then possible pressures from the Afghan Taliban, could have played a more significant role behind this process of reunification," said Abdul Sayed, a Sweden-based researcher on Jihadi groups in Pakistan and Afghanistan, told Nikkei.

The TTP reunification has alarmed China, which was already pressing Pakistan to crack down on ethnic separatist groups in Balochistan and Sindh provinces because of projects linked to the China-Pakistan Economic Corridor (CPEC), a prominent BRI component.

In Khyber Pakhtunkhwa, Chinese companies are working on several energy and infrastructure projects, including the Karakoram Highway Phase II. The Suki Kinari Hydropower Station and the Havelian Dry Port lie along the highway, which ends at the Khunjerab Pass in Gilgit-Baltistan. Over the border, it becomes China National Highway 314 leading to Urumqi, capital of the Xinjiang Uighur Autonomous Region. Old Taliban threat rekindled -- Pakistani policemen carry the flag-draped coffin in 2011 of a colleague killed by a suicide bomber past their headquarters in Peshawar.     © Reuters

Increased militancy along the highway could jeopardize a key BRI link. Anti-China rhetoric has already increased immensely in TTP and al-Qaeda media. Among Baloch and Sindhi separatist groups, CPEC projects are already propaganda targets -- foreign intrusions that remind some analysts of the British East India Company's efforts in the 1850s.

"The TTP often issues detailed statements against the China state, condemning the situation faced by Chinese Muslims in their own country," said Sayed. "More importantly, targeting CPEC projects can create severe economic problems for the Pakistani state -- destabilizing it is the ultimate goal of TTP and its allied anti-state Jihadists."

In 2013 at China's request, Pakistani authorities outlawed three transitional militant groups linked to al-Qaeda -- the East Turkestan Islamic Movement, the Islamic Movement of Uzbekistan, and the Islamic Jihad Union. The Chinese believed they had established sanctuaries in Pakistan's tribal areas with the help of the TTP.

Although China was initially less of a concern for the TTP than U.S. and Pakistani security forces, analysts believe that some transnational actors operating in Pakistan's tribal areas have encouraged the Pakistani Taliban to target Chinese projects as retaliation for the mistreatment of Muslims in Xinjiang province by Chinese security personnel. An ethnic Uighur woman walks in the main square of Kashgar in the Xinjiang Uighur Autonomous Region. China's treatment of the Muslim minority has seriously riled the Taliban in Afghanistan and Pakistan.    © Reuters

In a 2014 video message titled "Let's disturb China," Mufti Abu Zar al-Burmi, an influential al-Qaeda ideologue who is a Pakistani national of Rohingya descent, described the pullout of U.S. forces from Afghanistan as "a victory for the Taliban movement in the region." He said China would be the next target, and directed all Jihadi groups, including TTP, to carry out attacks on Chinese embassies and companies, and to kidnap or kill Chinese nationals.

The TTP has already killed and kidnapped a number of Chinese, mainly in Khyber Pakhtunkhwa and Balochistan provinces. With the TTP reunification, Pakistan security personnel have been beefing up numbers and intelligence to protect Chinese present in the region, according to security officials.

"The TTP's reunification can pose a threat in some districts of Punjab, Balochistan, and Khyber Pakhtunkhwa as the terror group has networks in these areas," Muhamamd Amir Rana, director of the Pak Institute for Peace Studies (PIPS), an Islamabad-based think tank, told Nikkei.

In 2019, the TTP and its splinter groups were the main causes of instability, carrying out 97 terrorist attacks, mainly in Khyber Pakhtunkhwa, Punjab and Balochistan that killed 209 people, according to a PIPS report.