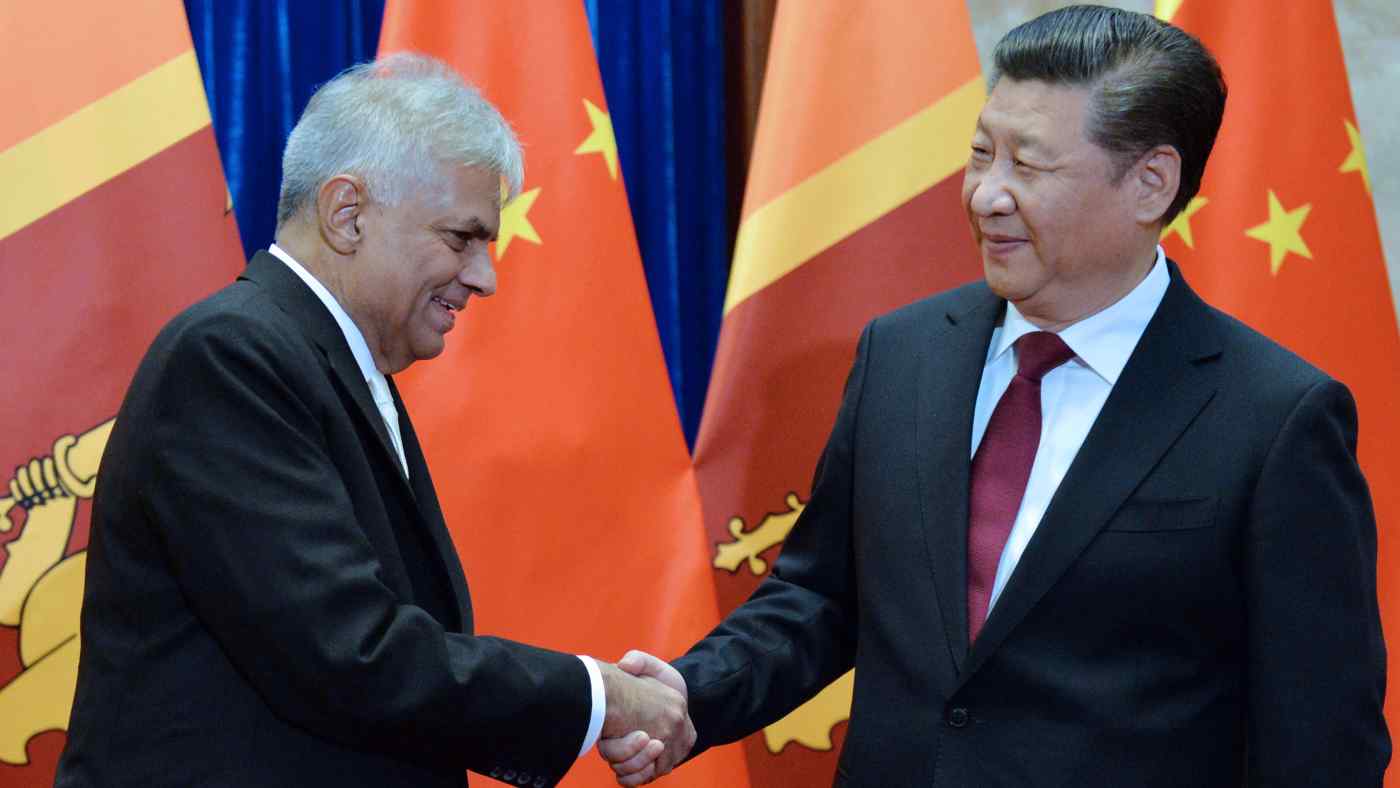 COLOMBO -- Sri Lanka has again turned to China for a fresh injection of cash, which will come during the final quarter of 2018, as it prepares for a crippling debt repayment cycle that will begin in 2019. But the $1.25 billion in loans will push Sri Lanka deeper into Beijing's grasp.

China is already the largest lender to the South Asian island.

The Central Bank of Sri Lanka is working with its Chinese counterpart, the People's Bank of China, to issue the equivalent of $250 million worth of yuan-denominated Panda bonds. Sri Lanka has already secured a $1 billion syndicated loan from China Development Bank on terms the central bank says were more favorable than what Western international lenders were offering. The first $500 million tranche is due to be transferred this week.

Sri Lanka retains an affinity for Chinese loans rather than international sovereign bonds, loans from the International Monetary Fund or other funding options. At the same time, it is being warned that its foreign reserves, now at $8.5 billion, are inadequate.

Between 2019 and 2023, Sri Lanka has to come up with $17 billion for maturing foreign loans and debt servicing. Its lenders include the China Development Bank, the governments of Japan and India as well as multilateral institutions like the World Bank and Asian Development Bank.

Central bank Gov. Indrajit Coomaraswamy said Sri Lanka diversified away from a tradition of only raising money through dollar-denominated international sovereign bonds in an effort to better handle external debt pressure. "Our debt dynamics are challenging, but manageable," Coomaraswamy told the Nikkei Asian Review. "The debt servicing next year will be a little over $4 billion, including an ISB of $1.5 billion, Sri Lanka development bonds and payments for bilateral and multilateral debts."

Sri Lanka, which has an $87 billion economy, will actually have to grapple with more debt payments in 2019. Its current-account deficit of 2.2% of gross domestic product will push its total debt burden to be paid for the year to $7 billion. "We are an outlier in terms of our debt indicators amongst our ratings peers," Coomaraswamy said, referring to central bank figures that say the country's debt is 77% of its GDP. This is higher than the debt-to-GDP ratio of neighbors India, Pakistan, Malaysia and Thailand. 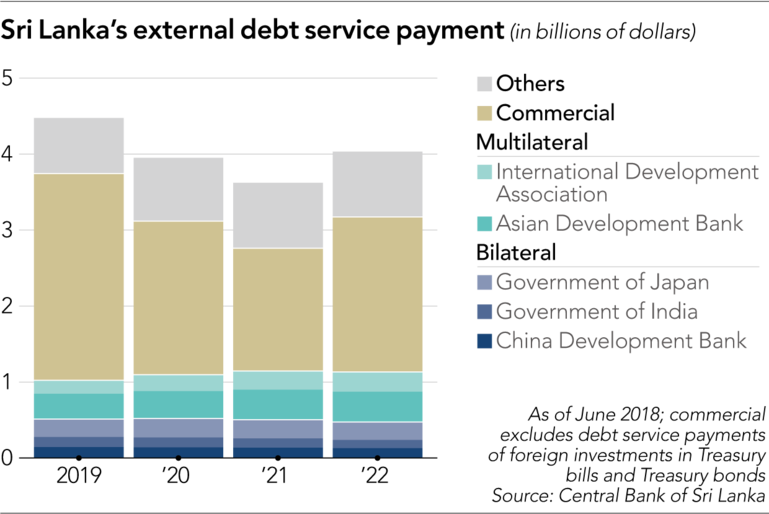 The country's accumulated foreign debt is estimated at $55 billion. Chinese lenders hold 10% of this total, Japan accounts for 12%, the Asian Development Bank 14% and the World Bank 11%.

Sri Lanka's mounting burden has earned it some notoriety, with some observers saying the country is falling into a debt trap of Chinese design. This view gained currency last year, after $1.1 billion in debt was written off in exchange for a long-term lease on the deep-water port of Hambantota, near the southern tip of Sri Lanka. Chinese loans worth $1.5 billion were used to build the port, the lease to which is held by a state-owned Chinese company.

Mahinda Rajapaksa, the former president of Sri Lanka who presided over the end of a nearly 30-year civil war, opened the door to Chinese lenders.

From 2010 till 2015, Rajapaksa's final years in office, Chinese poured $4.8 billion worth of loans into building the Hambantota port, a new airport, a coal-fired power plant and highways. By 2016, Chinese had loaned Sri Lanka $6 billion, fueling an infrastructure-building spree.

But the largest slice of debt that will mature over the next five years predates the Chinese lending boom. Multilateral institutions gave Sri Lanka 10-year grace periods and 30- to 40-year maturities on loan deals signed when the Indian Ocean nation was considered to have successfully embraced an open, liberal economy.

"We were a bit of a donor darling because, after Chile in 1974, we were second, and got a lot of concessional loans from the World Bank and the Asian Development Bank as a low-income country that had opted to liberalize," Coomaraswamy said. A "significant portion of the debt stock is that concessional money that came from multilateral and bilateral financial sources." Indraji Coomaraswamy, governor of the Central Bank of Sri Lanka, says his country needs more foreign direct investment and other capital inflows that do not put the country further into debt. (Photo by Marwaan Macan-Markar)

Sri Lanka's debt has dogged the coalition government of President Maithripala Sirisena. After nearly four years in office, the government has little to show in the way of foreign direct investment. It attracted $1.7 billion worth of FDI in 2017, far lower than the ambitious target of $2.5 billion. Likewise, the government has failed to improve the country's global ranking for ease of doing business. Sri Lanka sits in 111th place.

Its multibillion dollar trade deficit has been another drag.

Equally troubling, the government has made little headway against burdensome state-owned enterprises. They include Ceylon Petroleum Corporation, Ceylon Electricity Board, the Sri Lanka Ports Authority and Sri Lankan, the national carrier, whose combined debt is estimated at $7.93 billion, according to the IMF.

Coomaraswamy is banking on government policies beyond fiscal commitments to slow the rising tide of red ink. "To overcome the situation we need to get nondebt creating inflows," he said. "We need to get more FDI and to boost export growth."