BANGKOK -- Thai Prime Minister Prayuth Chan-ocha's appearance and welcome at the second Belt and Road Initiative forum that ended in Beijing on Saturday suggests a warming of Sino-Thai relations, but questions remain over whether the two sides can achieve the connectivity they have so keenly emphasized.

Two years ago at the first BRI forum, Beijing snubbed the Thai prime minister due to frustration over delays to the high-speed rail line that China envisages will one day run between its southwest and Singapore. The signing at the forum of a Memorandum of Cooperation between Thailand, Laos and China, aiming to hasten construction of the HSR line between Nong Khai in northeast Thailand and Vientiane in Laos, augurs progress.

Construction on Thailand's section of the HSR line has been repeatedly delayed because of disagreements over the terms of a related loan from the Export-Import Bank of China, disputes over land rights and concerns over the project's commercial viability.

Prayuth on Friday told Chinese counterpart Li Keqiang that he would accelerate construction of the Thai section of the railway to meet a notional 2023 completion date.

For Prayuth, the trip also served to assure Chinese President Xi Jinping that his government remains firmly in place, despite lingering uncertainty over the results of Thailand's general elections in March.

But even if Prayuth himself does not stay as prime minister, the government is legally bound to abide by the country's 20-year National Strategy, which was implemented last October and is part of the 2017 constitution. It is the blueprint through which Prayuth's military government aims to turn Thailand into a developed country by 2037.

The strategy's success is contingent on Thailand securing foreign investment for its $45-billion Eastern Economic Corridor development plan, which Prayuth has positioned as the fulcrum of the nation's future economic growth. "Once the BRI is complete, it will allow great connectivity into Thailand, and the EEC, [which] will be a core economic and industrial part of Thailand, so prosperity will spread across the country and across ASEAN," said Prayuth in an interview with Chinese state-owned news channel CGTN on the sidelines of the forum.

However, the two sides likely have differing visions as to what a complete BRI in Thailand and its consequent connectivity might look like. 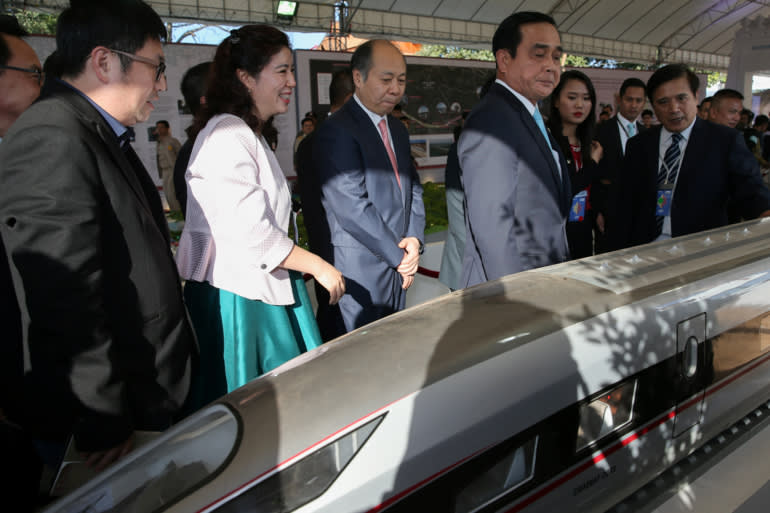 Thailand's Prime Minister Prayuth Chan-ocha views a model of a high-speed train during the groundbreaking ceremony for the Bangkok-Nong Khai high-speed rail development in Nakhon Ratchasima, Thailand in December 2017.    © Reuters

Under its vision for a China-Indochina Peninsula Economic Corridor, China views connectivity in Thailand as including not just the HSR line, but also the construction of a 120 km canal across the Kra Isthmus -- the narrowest part of the Malay Peninsula in southern Thailand -- and the clearance of rapids that prevent the passage of mid-sized commercial ships along the Mekong River.

"The EEC link to the Kra Canal, connecting the Gulf of Thailand to the Andaman Sea, is possible if the Chinese really push it," said Paul Busbarat, lecturer in international relations in the faculty of political science at Bangkok's Chulalongkorn University. "The grand scheme is the EEC as a hub of industry, from which the Chinese can export through the Kra Canal without going through the Malacca Strait."

In October last year, Prayuth ordered Thailand's National Economic and Social Development Board and Office of the National Security Council to look into the proposed canal project, but the government first needs to address geostrategic concerns from the likes of India and the United States, and to drum up some 2 trillion baht ($63 billion) in financing.

There are more obstacles in the path of Thailand's other BRI-related projects.

China is pushing for the northern Thai city of Chiang Rai to be the centerpiece of a cross-border special economic zone and logistics hub that would enable the elimination of tariffs on goods shipped down from southwest China via the Mekong River, while encouraging trade in e-commerce. But Thai stakeholders, including local government officials, are opposed to the plans, arguing that navigation knowledge of the river's upper reaches lies with Chinese businesses, and that e-commerce is of little relevance in a region that is largely devoted to agricultural production.

"In Thailand, civil society and local people question government policy. So it's not easy for Prayuth," said Dr. Chayan Vaddhanaphuti, director of Chiang Mai University's Regional Centre for Social Science and Sustainable Development. "After declaring the area an SEZ, the government has not been able to secure proper investment in their plan, or carry out the infrastructure investment in electricity or water."

The result of these various sticking points is Chinese direct investment into Thailand has so far been limited, according to Maria Brenda Lapiz, managing director of the institutional research department at Maybank Kim Eng Securities in Bangkok.

"In the BRI, mapping Thailand is missed out," she said. "That's why Thailand is insistent on getting the HSR project going despite difficulties and delays. As for Chinese investment in Thailand, many say it is growing and the industrial estate operators also confirm this. However, we don't see evidence of this in the Board of Investments data."

In 2018, Chinese applications to Thailand's BOI were dwarfed by those from the U.S.

However, recent pledges of further investment in Thailand by Chinese companies such as Alibaba Group and Huawei suggest Sino-Thai interests are beginning to coalesce. Prayuth told CGTN in the interview at the BRI forum that he expects more high-tech Chinese investment in the EEC going forward. 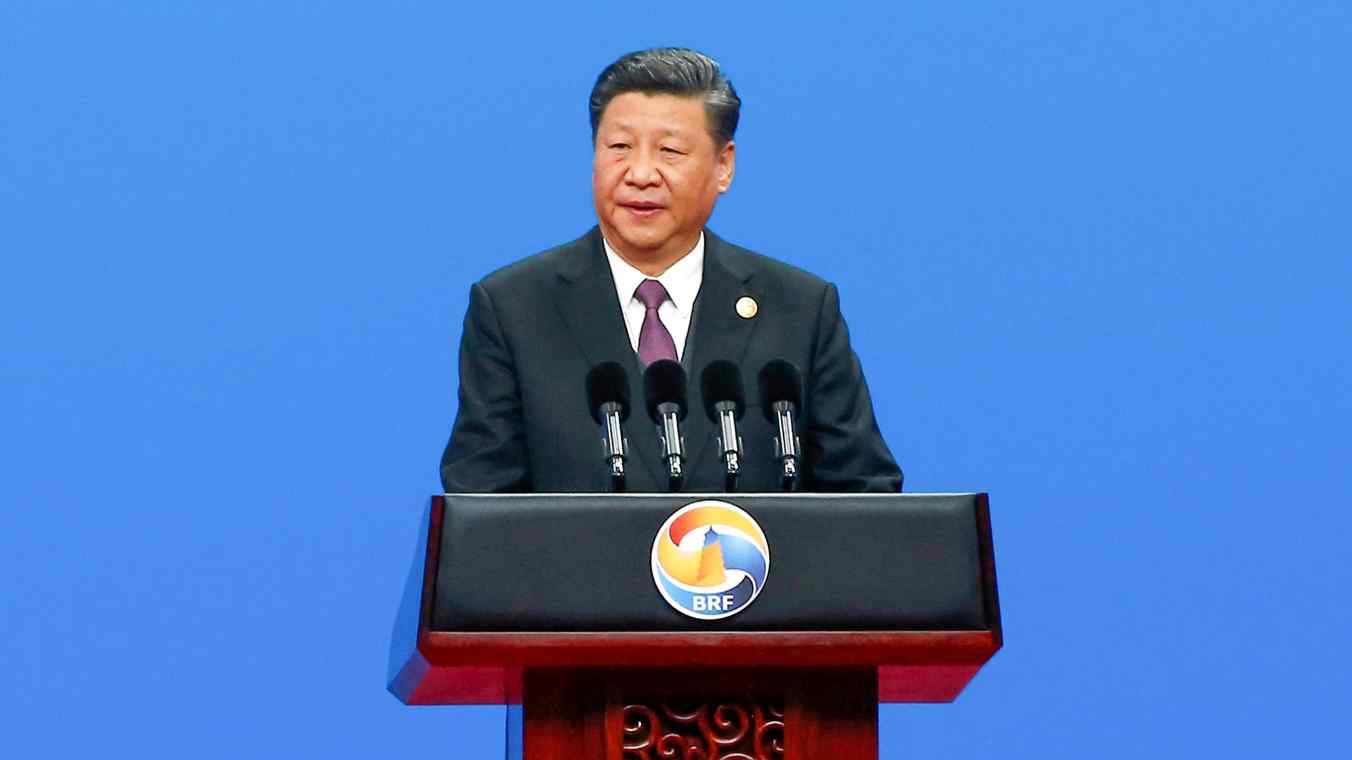 That chimes with commitments Chinese and Thai officials reiterated at the forum to lift bilateral trade to $140 billion in 2021, from $80 billion last year, as part of a broader agreement that aims to promote investment in areas including automobiles, smart electronics and robotics.

Prior to leaving for Beijing, Prayuth underlined in a statement to Chinese media that Thailand views the BRI's progress as contingent on its compatibility with multilateral frameworks.

He also called attention to pledges Xi made in his keynote address to find new ways to work with multilateral frameworks, which have long been anathema to Chinese policymakers, such as the European Union, African Union and the Association of Southeast Asian Nations.

For Prayuth, finding a way to engage China within ASEAN is critical for Thailand to retain influence, particularly as Beijing's gaze sweeps further west, focusing increasingly on Myanmar and developing BRI projects in central and western Asia, said He Baogang, Alfred Deakin professor and chair in international relations at Australia's Deakin University.

"It's interesting to what extent China will adjust its policy to use multilateral and regional organizations to promote its agenda," he said. "ASEAN's infrastructure building and connectivity proposals, which demand involvement from a diverse array of international stakeholders, provide a test case for China's ability to work within multinational frameworks, as does China's ability to jointly develop a code of conduct for the South China Sea."