BEIJING -- Chinese President Xi Jinping met with Greek President Prokopios Pavlopoulos on Tuesday as Beijing ramps up overtures to what it considers its next foothold into the European Union.

With Italy now officially part of the Belt and Road infrastructure building initiative, Xi is eager to secure a clear path to the west through greater trade and the use of soft power.

"Greece is a good friend to China," Xi said during their summit, calling on Pavlopoulos to help make Belt and Road a success. Pavlopoulos said he was happy to visit during the 70th anniversary of the founding of the People's Republic of China. China's state broadcaster heavily covered the trip while ignoring the newest round of U.S. tariffs.

China and Greece have grown closer in recent years. The Xi administration gave financial assistance to Greece during its debt crisis, and a Chinese state-owned company bought Greece's largest port of Piraeus. "The Port of Piraeus, which has won extensive acclaim, is an exemplar of successful cooperation between China and Greece," Chinese Foreign Ministry spokesman Geng Shuang said Monday.

This partnership seems to be accelerating, with Greek Prime Minister Alexis Tsipras attending a Belt and Road summit in China in late April. Tsipras also participated for the first time in China's "16+1" summit with Central and Eastern European countries that month.

Italy is the other key piece in China's European strategy. It became the first Group of Seven nation to sign a memorandum of understanding to be part of the Belt and Road Initiative, worth billions of euros in business deals, in March, and Italian Prime Minister Giuseppe Conte attended the Belt and Road summit in April.

A Chinese state-owned company is expanding the strategic Italian port of Trieste, which would extend China's influence into Western Europe. 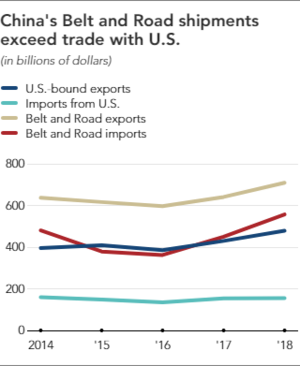 An advertisement in Hong Kong's South China Morning Post on Friday claimed Rome was built by Chinese settlers, and that Greek and Latin were derived from ancient Chinese. Chinese authorities seem intent on narrowing its distance to Greece and Italy, home to Europe's oldest civilizations.

Meanwhile, China is also rapidly expanding its trade with the 64 countries along the Belt and Road route. Chinese imports and exports with these nations grew 9% in the January-April period in yuan terms, compared with 4% for China's overall trade. Belt and Road-related imports and exports dwarf trade with the U.S. Xi is eager for inroads in markets outside the U.S. amid the protracted trade war.

"Trade with the U.S. amounts to less than 20% of China's total," said a source from a Chinese government think tank. "We can make up [for the trade war with the U.S.] by expanding trade with neighboring countries."

In a bid to boost Chinese soft power over Belt and Road countries, Xi himself pushed to host the inaugural Conference on Dialogue of Asian Civilizations starting Wednesday to promote Chinese culture, art and research. Government representatives from 47 countries, including Greece, Cambodia and Singapore, are expected to attend the opening ceremony.