Alibaba Group Holding displayed a wide range of its new technology in its big booth, from cloud computing and face-recognition payment systems to a voice assistant. The Hangzhou-based company showcased its AI program called ET City Brain, which helps city officials to improve services with real-time traffic management and prediction, as well as smarter drainage systems based on its clouding technology.

"We are the world's third-largest company in cloud computing, only behind Amazon and Microsoft. We are ahead of Google," said an Alibaba staff member in the booth. 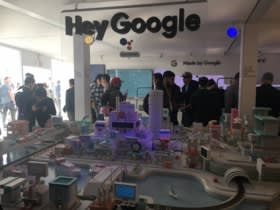 However, Google seems to be maintaining its edge and is drawing a lot of attention in the exhibition, strongly promoting its voice secretary, Assistant. People lined up for over an hour at the Silicon Valley company's outdoor booth to enjoy its AI technology, which has been applied to a wide range of products including displays and speakers made by many manufacturers, such as Lenovo Group, LG Electronics and Samsung Electronics.

Google was everywhere in the show, with the "Hey Google" slogan on the city's monorail, and promotional events in the streets. The company also surveyed people on their impressions of its voice assistant.

Samsung was perhaps the second-most popular company in the show, attracting crowds to its Galaxy Experience Zone and its SmartThings home appliance booth. The South Korean company offered virtual reality experiences to visitors, letting them enjoy virtual winter sports, such as skiing and sled-riding.

At its press conference, the company unveiled its dream of connecting all devices -- from smartphones to refrigerators to auto electronics -- through "internet of things" technology.

Chinese internet company Baidu also unveiled its ambitions for leading AI and 5G technology. Qi Lu, vice chairman at the company, said that competition between U.S. and Chinese companies will deepen this year over autonomous driving, smart devices and 5G.