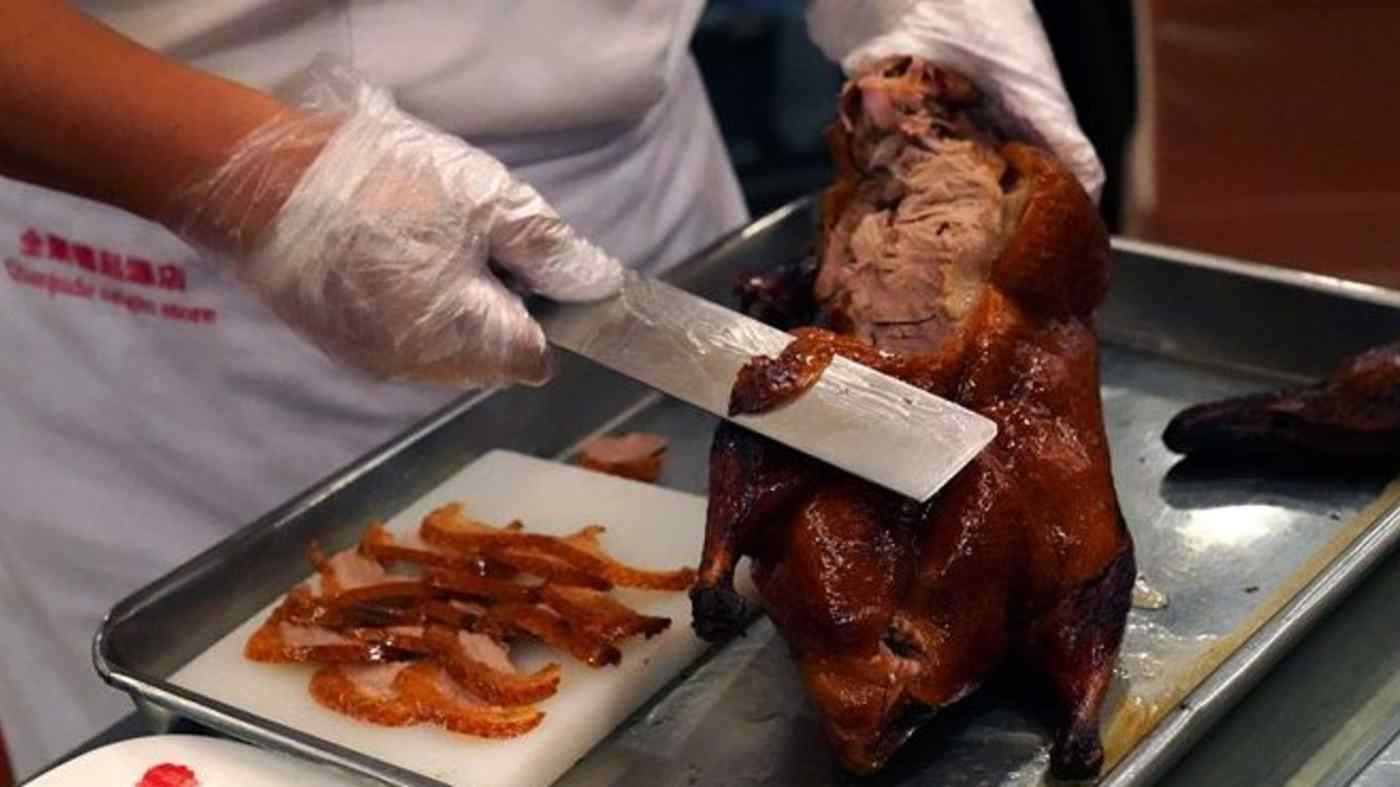 A chef carves up a roast duck at a Quanjude restaurant in Beijing.   © Reuters
BO XUE and TIMMY SHEN, CaixinOctober 28, 2020 22:15 JST | China
CopyCopied

It has served local diners, tourists and visiting heads of state for over 100 years, but venerable Peking duck chain China Quanjude (Group) continued to lose money in the third quarter as the brand struggles to find a place in today's food scene.

The Shenzhen-listed company booked a net loss of nearly 53.8 million yuan ($8 million), compared to a net profit of 20.3 million yuan in the same period last year, its third-quarter report showed. Revenue shrank 53% year-on-year to 203 million yuan, according to the report.

"The coronavirus epidemic has had a significant impact on the company's operation," Quanjude said in the report. However, it said that it has "enhanced the quality of its food and adjusted its services for online and offline markets" and that third-quarter revenue was up 53.4% from the previous quarter.

Quanjude's loss came as the 156-year-old company, which operates a chain of restaurants nationwide besides selling precooked ducks, struggled to meet the needs of a new generation of eaters.

"Quanjude's ossified management style is what mainly led to its decline," food and beverages industry analyst Zhu Danpeng said. The lagging development of its brand, menu and services have put it in a weak position in a competitive market, he said.

In 2016, Quanjude rolled out a delivery platform "Little Duck Brother," though it soon failed and operations stopped the following year. In March 2017, Quanjude said that it planned to acquire casual dining brand Tangcheng Xiaochu to "expand the company's existing business model."

However, these plans were dropped less than half a year later. Quanjude has also slashed prices, scrapped service fees and modified its cooking techniques to retain customers.

Annual profits shrank over and over again from 2017, going from 136 million yuan to 45 million yuan in 2019, according to the company's annual reports.

Though Quanjude is a long-standing Beijing brand that serves the city's most iconic dish, "it can't really bring much pride to old Beijingers," Zhu said, adding that despite the brand's history, it's not popular among old or young consumers.

Quanjude isn't the only long-running food brand that's suffering. Tianjin Goubuli Group, a restaurant chain renowned for its steamed stuffed buns, last month published an online apology for poor customer service and conditions at one of its biggest branches in downtown Beijing's Wangfujing retail area in the wake of a media expose.

"Old brands like Quanjude should get their grips on both their legacy -- such as the taste of their food -- and innovate in terms of dining scenarios and services, otherwise they will decline even sooner," Zhu said.