Vaccines will slow the disease, but experts predict virus will become like flu 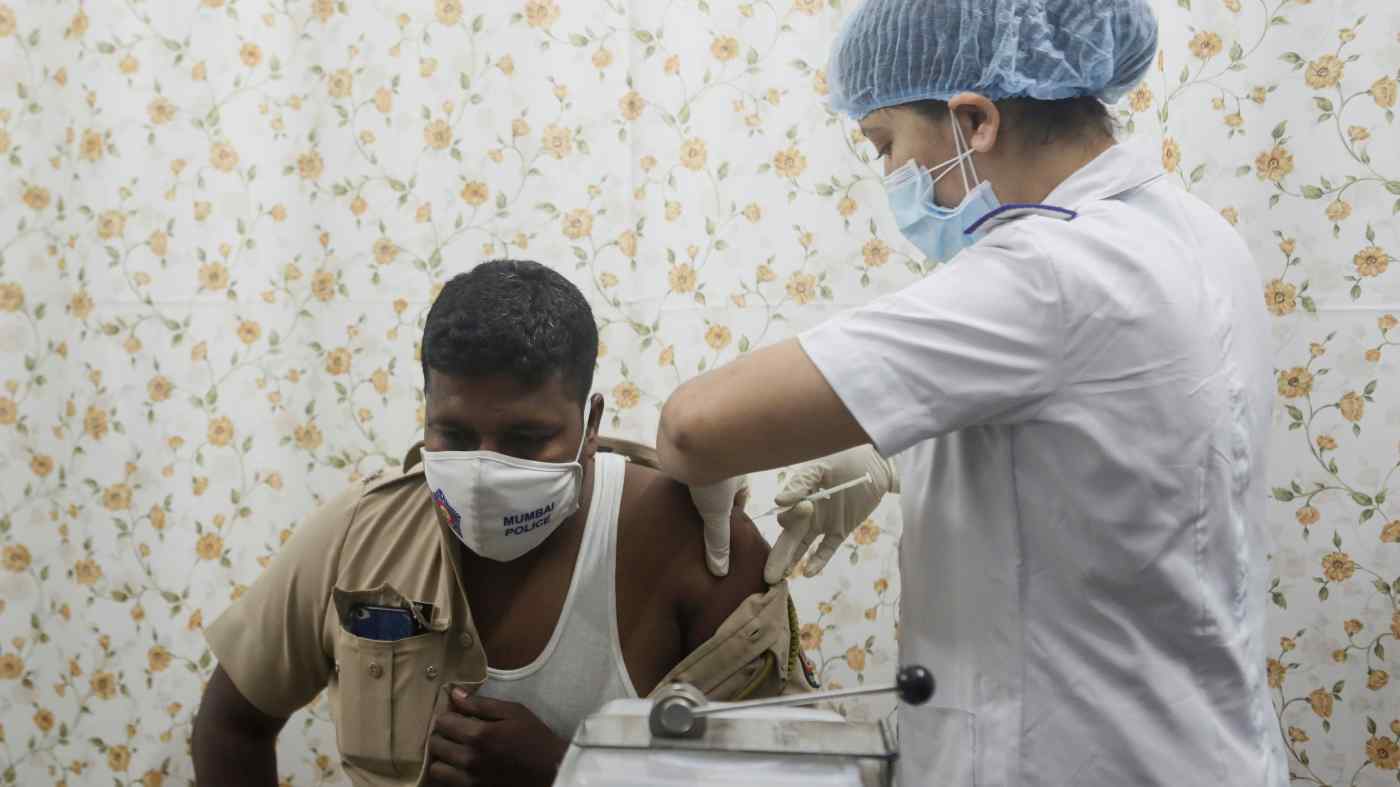 A police officer receives a COVID-19 vaccine in Mumbai made by the Serum Institute of India: At least seven vaccines to prevent the virus have been approved for public or emergency use.    © Reuters
ZHAO JINZHAO, MA DANMENG, WANG LIJUN and HAN WEI, CaixinFebruary 9, 2021 23:38 JST | China
CopyCopied

One year into a pandemic that has claimed more than 2 million lives and left most parts of the world shuttered, people around the globe are counting on effective COVID-19 vaccines to bring back normal life.

At least seven vaccines against the coronavirus that causes COVID-19 have won approval for public or emergency use in several countries, setting off a global race to protect people against the raging virus. About 200 more candidate inoculations are under development, according to the World Health Organization.

The pioneering shots include a vaccine developed by Pfizer and BioNTech using messenger RNA, or mRNA, a technology that delivers a bit of genetic code to cells. There is also a similar shot from Moderna and an adenovirus vaccine made by a partnership between Oxford University and AstraZeneca. Two inactivated-virus vaccines developed by Chinese companies -- state-owned China National Pharmaceutical Group (Sinopharm) and private Sinovac Biotech -- are also among the first inoculations cleared for public use, followed by Russia's Sputnik-V vaccines and Johnson & Johnson's single-shot vaccine.

Depending on the technologies used, the effectiveness of the currently available vaccines ranges between 50.4% and 95%, based on trial results. Although disputes over analytical approaches and real-world effectiveness remain, all of the approved inoculations have outperformed the WHO's efficacy requirement, fueling hopes that large-scale vaccinations will soon bring the pandemic to end.

Countries have raced to secure vaccine supplies and inoculate the public to slow the spread of the virus so that economies can reopen. However, the massive global vaccination campaign -- the biggest in human history -- has been hindered by limits on production and distribution, as well as public doubts about the vaccines. The emergence of new variants of the virus further complicates efforts.

The novel coronavirus that causes COVID-19 won't disappear soon by itself and people must learn to coexist with it, some experts say. Effective vaccines and adequate inoculation are the only way to stop the pandemic and prevent societies from being paralyzed again by the virus, they said.

As vaccine rollouts begin around the world, here are some key facts to know:

What are the major safety concerns?

There have been doubts about the safety of the COVID-19 vaccines, especially after a small number of serious allergic reactions were reported following injections of the two new mRNA vaccines. According to the U.S. Centers for Disease Control and Prevention, 21 cases of severe allergic reactions were recorded among the nearly 1.9 million people who received a first dose of the Pfizer COVID-19 vaccine between Dec. 14 and Dec. 23.

In January, Norwegian news site Norway Today reported that the country recorded 23 deaths linked to vaccinations using the Pfizer-BioNTech shot, all occurring in frail elderly people. Investigations of 13 incidents found that the deaths were most likely caused by severe side effects from the vaccinations, such "fever and malaise," according to the Norwegian Medicines Agency. But the agency also said the vaccines have low risks with a "small exception for the frailest."

A New England Journal of Medicine article said acute allergic reactions after vaccination have been rare for most known inoculations, and won't cause permanent harm with proper treatment. But the article also noted that because the mRNA vaccines for COVID-19 are the first to apply the advanced technology in mass use, there is a lack of prior experience and information to explain allergic reaction mechanisms related to the vaccines.

But the mRNA vaccines may be safer than traditional inoculations as they do not contain any virus, according to Drew Weissman, an immunologist at the University of Pennsylvania and an expert on mRNA vaccines. Traditional vaccines, such as for flu or measles, activate the immune system by injecting people with small amounts of a virus in attenuated forms, or a virus that scientists have killed but whose viral proteins can still stimulate immunity. But despite the best efforts to kill the virus, in some rare cases the virus does not die.

"It is a common-sense and basic principle that all vaccines are still subject to post-market safety monitoring" as clinical trials may not be enough to capture all potential risks, a public health expert said. While it is normal to have concerns over vaccines that use a new technology, current data don't indicate any unusual safety issues with mRNA vaccines, the expert said.

How well do the vaccines work?

The two mRNA vaccines outperformed others, with high efficacy rates in clinical trials. The Pfizer vaccine showed an efficacy of 95% in preventing symptomatic COVID-19 infection after two doses, while the Moderna vaccine was 94.1% effective.

But there are disagreements over the figures. Peter Doshi, an assistant professor of pharmaceutical health services research at the University of Maryland School of Pharmacy, argued that the efficacy of Pfizer's vaccines could be as low as 19% when taking into account a large number of suspected cases that were involved in the trials. But many health experts said Doshi's methodology is flawed and significantly underestimates the efficacy, although they agreed that Pfizer should provide more raw trial data.

China's Sinopharm reported on Dec. 30 that its inactivated vaccine was 79.34% effective in stopping people from catching COVID-19. No detailed data on the vaccine has been released. The shot won approval for mass use in China the following day. Sinovac reported efficacy rates between 50.4% and 91.3% for its vaccines in different trials in Turkey, Indonesia and Brazil. The vaccine is under review for public use in China.

It is common for inactivated-virus vaccines to be around 50% effective, a health expert said. "The efficacy rates for seasonal flu vaccines often fall between 40% and 60%, but people now expect higher" efficacy for COVID-19 vaccines, the expert said.

Despite lower effectiveness, inactivated-virus vaccines are preferred by some countries because the technology is mature and are easier to produce and more stable, with less stringent requirements for transport and storage.

Another potential alternative is a protein-based vaccine developed by Novavax, which reported 89.3% efficacy in the final stage of clinical trials in January.

The recent emergence of several new coronavirus variants sparked fears that the current vaccines might be less effective in containing the new strains. Johnson & Johnson and Novavax both reported lower efficacy rates for their vaccines against the highly infectious strain found in South Africa.

Moderna and Pfizer-BioNTech said their vaccines were effective against new variants of the coronavirus discovered in Britain and South Africa. But Moderna said that for the South Africa variant, there was a sixfold reduction in levels of neutralizing antibodies, which bind to the virus and prevent it from invading human cells. The company said it is studying a booster to target the new strain.

Experts said mRNA and inactivated-virus vaccines are the best options for rapid tweaking to cope with the evolving virus. Ugur Sahin, chief executive of BioNTech, said in December that the company could adjust its mRNA vaccine within six weeks to adapt to new variants.

But Jiang Shibo, a virology professor at Fudan University in Shanghai, said it would be tough for vaccine development to keep pace with virus mutations. Jiang suggested early engagement in long-term studies on vaccines that can deal with a broader spectrum of virus strains.

When will vaccinations stop the virus spread?

The goal of vaccination is to create so-called herd immunity, where enough people become immune to a disease to stop transmission. Experts said herd immunity could be achieved when at least 70% of the population is immune, either through vaccinations or previous infection. That means 5 billion people out of a global population of 7.5 billion.

But the current pace of vaccination is too slow to achieve that goal in most countries, reflecting constraints on vaccine production, delivery and distribution, experts said.

China has administered about 24 million doses of vaccines as of late January, according to data from the CDC. At that speed, the country will take years to inoculate enough of its 1.4 billion people, said Jiang Qingwu, a virology expert.

Speeding up vaccination is crucial also because antibodies induced by COVID-19 vaccines are expected to last two to four years the human body, with the strongest protection coming in the first six months, said Yang Zhanqiu, a virologist at Wuhan University. The completion of mass inoculation by the end of this year will be crucial to stopping the pandemic, Yang said.

Will the coronavirus be eliminated by vaccinations?

Worldwide vaccination was the key for the elimination of the highly infectious and deadly disease smallpox in humans by the 1980s. Can that success be copied in the battle against COVID-19?

Some experts said eradicating COVID-19 is almost impossible because coronavirus inoculations may not confer long-lasting protection, unlike smallpox vaccinations, which can confer lifelong immunity. Meanwhile, the existence of many asymptomatic COVID-19 patients who can spread the virus without showing symptoms allows the disease to spread quietly.

The novel coronavirus is likely to become a flu-like chronic illness and coexist with humans for a long time, experts said. Vaccinations will reduce the virus's damage to humans and allow people to return to normal life, they said.