Handouts for electric vehicle companies to run through 2022: Finance Ministry Car manufacturer profits plunged 80.2% in the first quarter, more than twice the average industrial profit slump of 36.7%, according to data from China's National Bureau of Statistics.

Among the most impacted was Hong Kong-listed BAIC Motor, which saw profits plunge 95% year-on-year to 60.84 million yuan ($8.6 million) in the first quarter, company financial records show. U.S. auto giant General Motors saw its branches in China record a 43.3% slump in sales in the same period.

SAIC Motor, China's largest carmaker, predicted sales could drop as much as 11.6% to 22.9 million units this year, while officials at the China Association of Automotive Manufacturers (CAAM) said money lost in the first half of the year could not be offset -- even if sales recover to 2019 levels in the second half.

Now automakers are mobilizing, and the Chinese government is thrashing out rescue measures, such as subsidies and tax cuts, to prevent the industry from crashing and prop up the economy in the process. The U-turn for China's car industry began in 2018, after more than two decades of constant growth, fueled by economic reforms that improved infrastructure and made private car ownership a possibility for many families.

Analysts differ on how much of the slump was down to China's broader economic slowdown and how much to license restrictions in cities like Shanghai and Beijing to help ease severe air pollution. But auto sales dropped 2.8% in 2018 and 8.2% last year.

State support was forthcoming, due largely to the central role of car sales in China's economy. Cars accounted for around 10% of Chinese retail sales last year, or 4 trillion yuan, according to data from the National Bureau of Statistics.

Fifteen cities, including the traditional carmaking powerhouse of Guangzhou, are handing between 1,000 yuan and 8,000 yuan to new car buyers and dealerships. Some only apply to locally made cars.

Relaxed license plate restrictions are among the measures. Shanghai and nearby Hangzhou pledged to grant 200,000 and 400,000 license plates this year, respectively.

There are two ways to get license plates in China: buy them or win them in fiercely competitive monthly lotteries. Neither option is particularly accessible to ordinary car buyers. In Guangzhou, a typical license cost about 18,500 yuan in the first quarter, and costs in Beijing and Shanghai are even higher.

Hoping to win one in the lottery? In Guangzhou, your chances are about 6 in 1000. 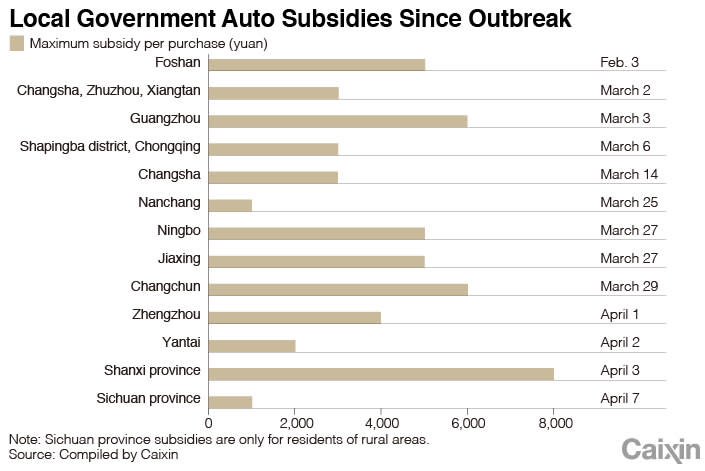 New energy vehicles are a major part of China's top-level automotive strategy. NEV subsidies were launched in 2010 as a way to supercharge the fledgling market's development.

Alongside other supportive policies, this boosted NEV purchases and helped China's electric vehicle market become the world's largest by 2015.

In 2017, policymakers began to take the industry off cruise control. Dong Yang, former vice president of CAAM, estimates the state granted 75% less money to the sector last year than in 2018.

New energy car sales in China dropped 4% in 2019 to 1.2 million vehicles following the cut, according to CAAM.

Now, as China recovers from the coronavirus, subsidies are back in vogue. The Ministry of Finance announced on April 27 that handouts for electric vehicle companies, due to be terminated by the end of this year, would be extended to 2022, and rolled back incrementally.

Some industry insiders say the policy won't be able to reverse the downtrend, as NEVs still cost more than fossil-fuel cars.

Yang told Caixin that the subsidy extension was an attempt to compensate for significant cuts last year, and stabilize the new energy industry, rather than a way of stimulating sales.

The Ministry of Industry and Information Technology wants NEVs to make up 25% of all Chinese car sales by 2025, up from the current target of 20%, it said last year in a draft paper.

There were 260 million privately owned passenger cars in China last year, data from the Ministry of Public Security shows. If the Chinese used car market was as mature as in some developed countries, nearly 40 million used cars would be traded each year, according to modeling by state-run media outlet Economic Daily.

In reality, just 14.92 million were traded last year, according to the China Automobile Dealers Association, or CADA.

The value-added tax for used car sales will be cut by 1.5 percentage points to 0.5% from May 1 this year through the end of 2023, in a bid to ease dealers' financial burdens.

China's traditionally tepid used car market has, like everything else, taken a hit from the coronavirus. Only 2 million used cars were traded in the first quarter of the year, a drop of 38.4% year-on-year. More than 40% of trades happened in wealthy Guangdong and Zhejiang provinces, data from the association shows.

The auto industry is calling for further measures to boost sales. CAAM asked for a cut to the tax on new car purchases on April 10, but it appears to have fallen on deaf ears.

That was once an effective stimulus for Chinese auto buyers. Back in 2009, Chinese authorities halved the tax to 5% for cars with 1.6 liter engines or smaller and raised it to 7.5% the next year before bringing it back to the original 10%.

A boom followed, with 85.6% more cars sold in the fourth quarter of 2009 compared with the same period the prior year. And 2010 saw double-digit sales growth.

It was a similar story between 2015 and 2017, when policymakers reran the subsidy package. This time, the purchasing frenzy dissipated as soon as the cuts ended.