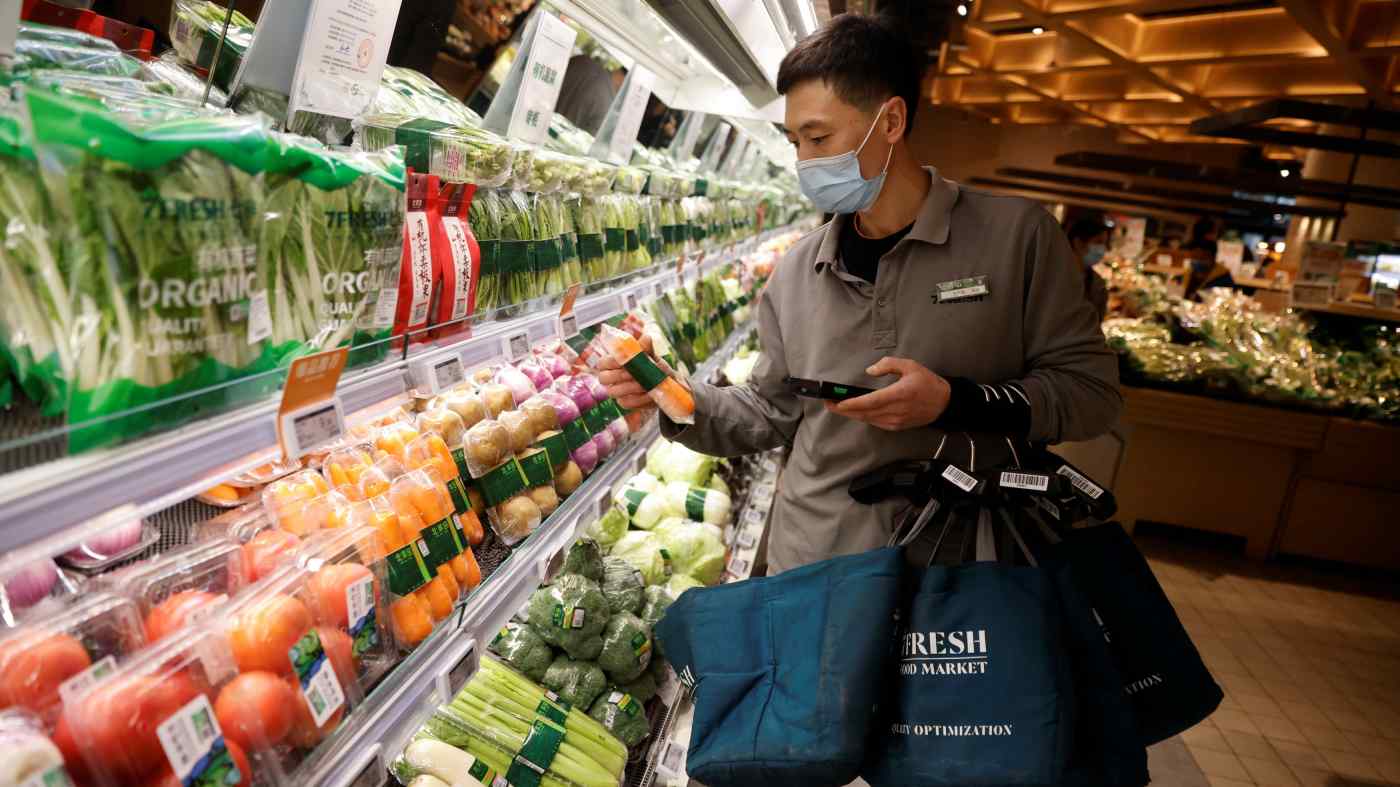 A clerk puts together an order that came in via an app at JD's 7Fresh supermarket in Beijing, China, on November 11, China's Singles Day.   © Reuters
TANG ZIYI, CaixinDecember 10, 2020 16:14 JST | China
CopyCopied

China saw deflation in consumer prices for the first time in more than 11 years in November due to a drop in food prices, official data showed Wednesday.

The consumer price index, which measures changes in prices of a basket of consumer goods and services, fell 0.5% year-on-year in November, marking the first decline since October 2009, according to data from the National Bureau of Statistics, or NBS. In October this year, the CPI rose 0.5% year-on-year.

The median estimate in a Caixin survey of economists predicted that the November CPI would remain unchanged year-on-year.

The main reason for November's deflation was the 2% year-on-year drop in food prices, a reversal from October's 2.2% growth, said Dong Lijuan, a senior NBS statistician. As the African swine fever outbreak's impact on the pork supply has faded, pork prices plunged 12.5% year-on-year in November, much steeper than the 2.8% decline the previous month.

One piece of evidence is that the core CPI -- which excludes more volatile food and energy prices and may better reflect long-term inflation trends -- remained stable last month, rising 0.5% year-on-year, as it had for the previous four months. 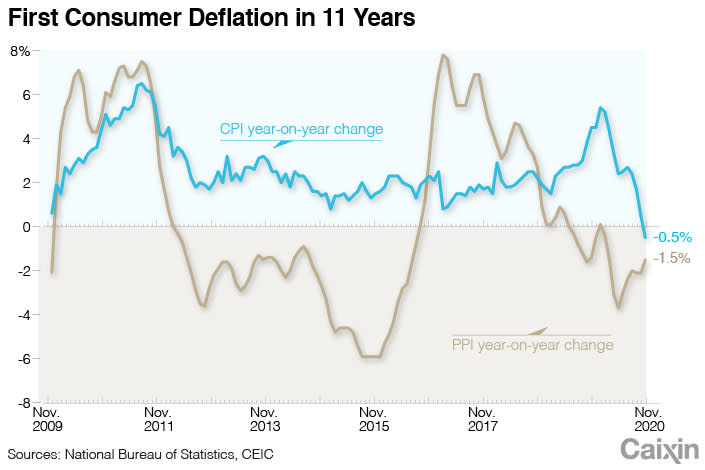 The Nomura economists expected the CPI to return to inflationary territory or remain unchanged year-on-year in December due to weaker base effects and the likelihood of rising prices for pork and energy products.

The producer price index, which measures changes in prices of goods circulated among manufacturers and mining companies, dropped 1.5% (link in Chinese) year-on-year in November, marking the weakest deflation since March. The decline was slower than the 2.1% drop the previous month and milder than the median estimate for a 1.8% decline in the Caixin survey.

On a month-on-month basis, the PPI grew 0.5% in November, up from zero growth the previous month.

The PPI indicator improved because of rising global oil prices, as well as increasing prices in the gas and coal processing industry amid greater demand for heating in winter, said analysts with Citic Securities The year-on-year change in PPI is expected to turn positive in the first quarter next year, the Citic analysts said.

The Nomura economists expected PPI deflation would further slow to 1% year-on-year in December. The change in PPI will likely turn positive in the second quarter next year and grow around 2% year-on-year before the end of 2021, they said.