Kids have lunch at a primary school in southwest Guizhou province, China in 2012. The country's central government in 2011 initiated an unprecedented program designed to boost nutrition for children in the vast rural regions.    © AP
HUANG HUIZHAO and HAN WEI, CaixinJuly 7, 2021 11:01 JST | China
CopyCopied

When the bell rings, hundreds of students flood into the canteen in the Longfu Primary School in Du'an county, where they will enjoy a free meal with hot rice, meat stew and vegetable stir-fry.

Deep in the mountains of southern China's Guangxi Zhuang Autonomous Region, the outlying Du'an county has been plagued with poverty for decades and was known as one of the poorest places in China.

A decade ago, steamed soybeans with rice was the most common meal for school children at the Longfu school. Without enough nutrition, children in Du'an were generally shorter and thinner than their peers in the rest of the country.

Things have changed since 2011, when the central government initiated an unprecedented program designed to boost nutrition for children in the vast rural regions. Under the program, more than 600 kids at the Longfu school can enjoy a free school lunch every day. "The program has significantly improved the physical condition of rural children," said Lu Mai, vice chairman of the China Development Research Foundation. The foundation launched a program in 2007 to help rural schools improve students' nutrition, which won the central government's support and evolved into the 2011 school meal pilot program.

Globally, school meal programs have been widely adopted by governments as a way to improve child health and encourage school attendance. According to studies by the United Nations' World Food Program, as of 2020 more than 150 countries offered various kinds of school meal programs, costing $41 billion to $43 billion annually. More than 90% of the funding came from governments. "School feeding is a game changer -- for children, for communities and for countries," WFP Executive Director David Beasley said in February. "That one meal a day is often the reason hungry children go to school in the first place." But the program faces challenges from the country's changing economic conditions and people's evolving appetites. In 10 years, the central government's average subsidy supporting the program increased from three yuan per child each meal to four yuan. But during that period, prices for staple foods rose several-fold, adding financial pressure on local authorities and schools. Meanwhile, the quality of the program varies among regions depending on local implementation, and the challenge of making the program more sustainable is testing officials' ingenuity.

In March, the Ministry of Education partnered with the CDRF to launch a review of the school meal program's 10 years. Massive assessments involving inspections and interviews will be carried out across the country to study the achievements and failures of the program.

Every Monday morning, 20 refrigerated trucks carrying four tons of pork, eight tons of vegetables and fruit, and 10.8 tons of rice visit 300 rural schools in Du'an county. The supplies are to feed 80,000 students over the week.

"I like to eat at school more than at home," Ajian, a fifth-grade student at Longfu school, told Caixin. With meat, vegetables and unlimited rice, lunch at school has become an essential part of Ajian's daily life. Ten years ago, many children like Ajian in Du'an suffered from malnutrition. A survey by the CDRF found that 12 of every 100 rural students in the county showed growth retardation, meaning their height was more than 6cm lower than that of peers in urban areas. Many boarding school students consumed no Vitamin C in daily meals.

"Many students ate no fat throughout the week, and there were always students who fainted due to hypoglycemia," said Wei Jun, a school principal in Du'an.

Although the government since 2008 has handed out billions of yuan in subsidies to rural families for childhood nutrition, little of the money was spent to improve children's meals, the CDRF survey found.

In November, Du'an was no longer listed as a "deeply poor" county as the local economy expanded. But for many rural families, meals provided by schools remain the main nutrition source for their kids.

When Tang Yi took the helm of overseeing the student nutrition program at Du'an county's education bureau in 2017, he faced mounting challenges to manage food supplies for hundreds of schools in the county. Many schools had fewer than 50 students and were located in isolated mountain areas that were difficult to reach.

Poor management and lax oversight left the county's school meal project in a shambles. The quality of school meals varied widely. In some small schools, the so-called school meal notoriously contained only a pack of cookies or a box of milk. An audit of the project's operation between 2011 and 2017 found massive financial fraud and embezzlement, according to Tang.

Du'an was not unique. A 2016 report by China Education Daily newspaper disclosed that some school canteens in northeast China's Heilongjiang province were subleased to private operators and provided substandard food to students.

"In the past, schools found their own suppliers and were under insufficient oversight by the county," Tang said.

Since 2019, the Du'an county government consolidated local school food procurement under unified management. All purchases are conducted through public bidding, while spending and product quality are under the government's supervision, Tang said. Many other localities in recent years have similarly tightened oversight, introducing public bidding, unified procurement and distribution.

While years of effort have put China's school meal program in good shape to provide safe and nutritious meals to many rural students, the project still faces mounting challenges to keep going.

The African swine fever that slashed China's pork production in 2019 and 2020 further rattled the school meal program. "As the pork price surged to 30 yuan per kilo in May 2020, many schools could afford only a little meat in the meals," Tang said. Pork prices have since eased somewhat.

While the central government subsidy covers most of the food spending, schools still need to shoulder most of the costs to run the canteens. A study by Shao Zhongxiang, a Ph.D. candidate at Southwest University in Chongqing, found that schools in Guizhou, Yunnan province, usually face additional electricity costs of 40,000 yuan to 50,000 yuan a year to power the cafeterias. 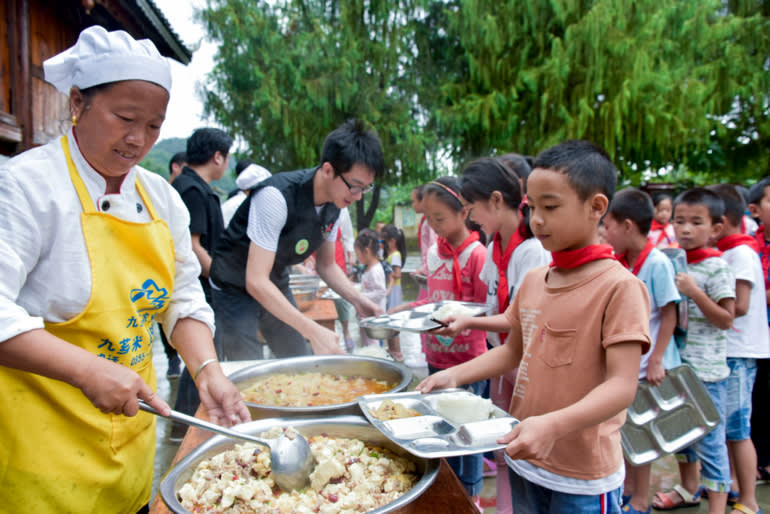 Children get free lunch at a primary school in southwest China's Guizhou province in 2017.    © AP

Electricity and water costs to run a canteen generally account for 12% to 28% of total annual spending for a school's operations, according to Zhao Yanyan, an education official at Guangxi.

Rising labor costs have made it increasingly difficult for school cafeterias to hire enough staff with limited budgets. Caixin learned that 79 out of Du'an's more than 300 schools now struggle to hire food service workers as the wages they can offer are too low.

In 2020, the Du'an county government spent 7.3 million yuan to help schools hire canteen workers. The county's total fiscal revenue was 652 million yuan, mainly from agriculture and animal husbandry. The county government funded local schools' spending on cafeteria water and power for several years starting in 2012 but stopped after 2016, as it could no longer afford to do so, Tang said.

Some experts said it is time for the central government to increase subsidies for the school meal program. The CDRF suggested that the per capita subsidy should be raised to 5 yuan from 4 yuan per meal. Others said more diverse funding channels should be introduced to expand the program's financing, including partial payments by students' families.

"The new problem is that malnutrition and overnutrition co-exist among rural students," said Zhang Fan, a public health expert at Hainan Medical University.

Studies tracking the rural school meal program over the past five years found that although the program has greatly reduced malnutrition, children's average nutritional condition is still lower than that of urban kids with vitamin deficiencies more common. At the same time, obesity is increasing among rural kids.

Caixin found that meals provided in most rural schools in several provinces lack diversity. Only a few schools have nutrition professionals involved in meal arrangement.

In the long run, the school meal program should be supported by legislation and regulations to ensure sustainable operation, Zhang said.

In 2015, then-Vice Minister of Education Lu Xin proposed legislation to support the school meal project. However, related lawmaking has yet to start. Written regulations to assist the program with finance and taxation are also lacking.

Current implementation of the school meal program mainly depends on local authorities' attitude, Zhang said. "Only when leaders realize the importance of nutrition improvement and understand how the program should be carried out can the project achieve the best effect," Zhang said.

All the evidence shows that school meal programs along with other social protection initiatives are one of the smartest long-term investments any government can make, the WFP said in a February report.

"The return on investment can be as high as $9 for every $1 invested in implementing school feeding programs," the report says.