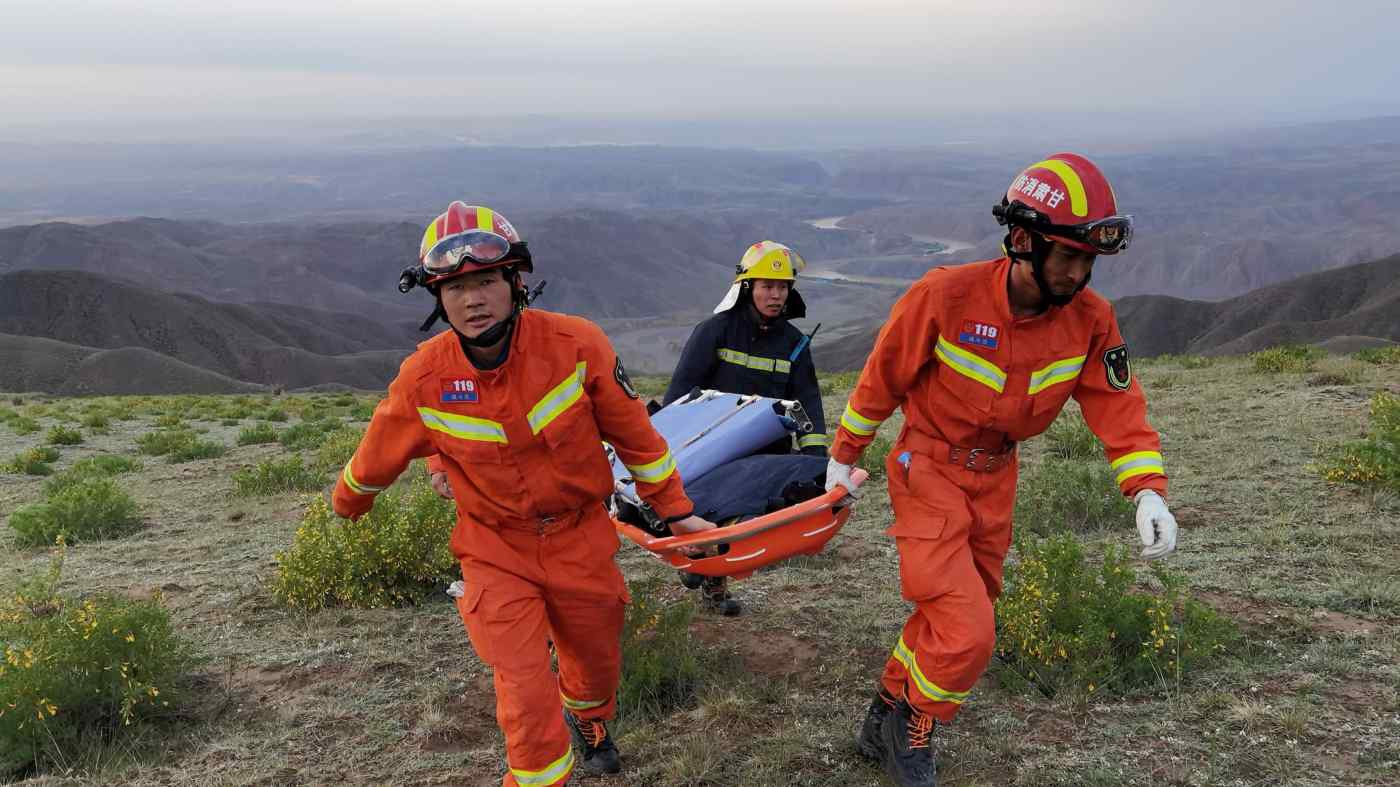 The lack of safety standards in China's cross-country running world is under scrutiny in the aftermath of a deadly race in the country's northwestern Gansu Province, with at least 13 planned trail and road events now delayed and four canceled outright as of Tuesday.

Twenty-one runners died on Saturday when a 100-km, high-altitude foot race through the Yellow River Stone Forest tourist site was suddenly hit by rain, hail and freezing gales, prompting charges that inexperienced organizers had not prepared the runners for extreme weather.

Several participants and rescue professionals told Caixin the event was poorly organized, with things like windproof running jackets removed from the list of compulsory gear for runners, leaving them vulnerable to abrupt weather changes.

Most who perished in the tragedy died of hypothermia, a dangerous drop in body temperature usually caused by prolonged exposure to cold temperatures.

Long-distance cross-country races have been growing in popularity in China, allowing athletes to test their limits and see a bit more of the huge country, but industry insiders tell Caixin that enthusiasm for the sport has outpaced careful planning and risk control.

Cross-country or trail running is relatively new in China. The first major events were held in 2014, and by 2019, before the pandemic, there were thousands of such events annually, those with knowledge of the industry estimate.

There are thought to be about 100,000 active trail runners in China.

Unlike road running, trail running involves tracks that are not paved or sealed, and runs often take place in undeveloped rural areas. The Gansu race followed a route through canyons and hills on an arid plateau, including a section rising 2,000 meters (6,500 feet) above sea level.

Cheng Yuan, a veteran organizer of trail running events, told Caixin that in 2016 there were only 20 to 30 companies involved in organizing these endurance events. Today there are hundreds. They often take in major tourist sites, with organizers hoping they will be a drawing card and bring in sponsors.

Compared with road marathons that have relatively clear rules and regulations, there is no clear authority regulating cross-country races, high-profile race organizer Wang Yan said. There are no uniform standards, and in practice, organizers come up with different rules and standards based on a race's difficulty level.

Organizers have discussed uniform standards, Tong said, but the geographical variations inherent in trail running make this task difficult. In April, CAA issued a guideline that stipulates how trails should be designed and marked.

Chen Jiajun, a long-distance runner who in 2018 participated in the Gaoligong Ultra race in Southwest China, told Caixin that safety standards for trail running events need to be even higher than those for regular road races. Organizers should screen the runners by their ability, design trail rules and set compulsory equipment requirements, he said.

That is often not the case in a field dominated by enthusiastic amateurs. One trail event organizer said many in the industry lack the experience to develop a sound safety plan. "It all depends on the organizer's professionalism," the person said.

Caixin has learned from knowledgeable sources that the organizer behind the doomed Gansu race was a small company with an executive team hired on a temporary basis. Gansu Shengjing Sports and Cultural Development Co. Ltd., established in 2016 with registered capital of 5 million yuan, won the bid to conduct its first race in 2018. This year was the fourth time the company had run the event.

None of the executives in charge of the race were formal employees of the company but were introduced by friends or were invited to work on the race, Caixin has learned.

Authorities in Gansu said Tuesday that they have launched a joint investigation into the race, aiming to investigate the cause of the deaths as well as the company that organized the race. The authorities said they have invited experts from relevant national authorities to participate, including the General Administration of Sport and the China Meteorological Administration.

Sports event organizers hire temporary staff mainly to limit expenses, one marathon organizer told Caixin. But it's more common to recruit volunteers for support roles, and retain an executive team made up of permanent staff, the person said. "Professional organizers would not allow contestants to run long-distance cross-country races in shorts and short-sleeve tops," they added.

Wang said tragedies like Gansu were inevitable when companies with little experience -- including public relations companies in some cases -- are left to run cross-country trail races.

As of Tuesday, at least four races had been canceled in the aftermath of the tragedy, including the Salomon race that was set to start on Sunday in Chongqing; the 2021 Xtrail planned for Kanas, Xinjiang Uygur autonomous region, on June 9; and the Wuzhong Four Seasons, due to start on June 12 in Suzhou, Jiangsu Province. At least 13 road and trail races had been postponed indefinitely.

Han Wei and Denise Jia contributed to this report.