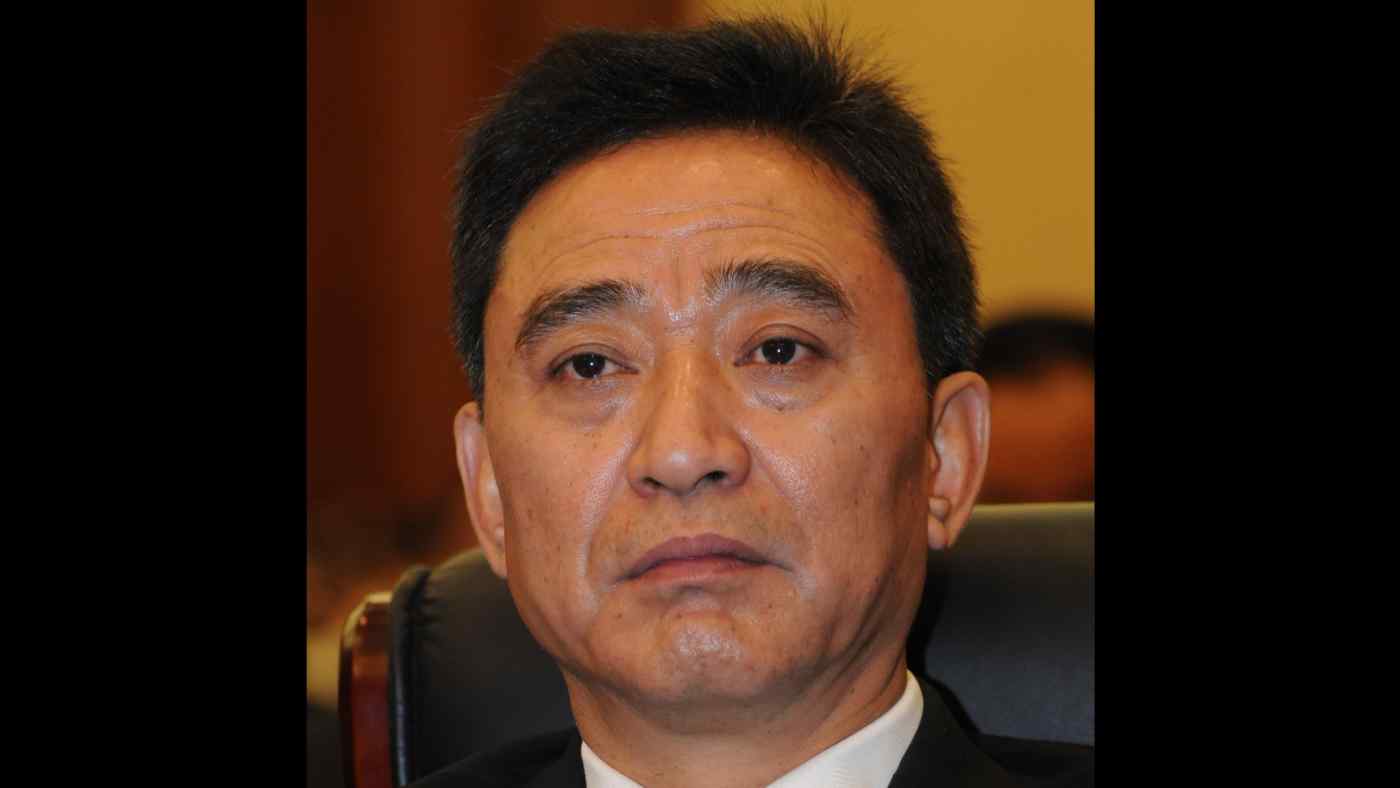 Liu Canglong in 2010. Liu is a cousin of Sichuan tycoon Liu Han, who was executed in 2015 for gang-related crimes, including murder. Liu Han was a business partner of the eldest son of Zhou Yongkang, a former Politburo Standing Committee who was jailed for life in 2015 for taking bribes, abusing his power and leaking state secrets.   © AP
WU YUJIAN and LUO MEIHAN, CaixinJune 9, 2021 21:57 JST | China
CopyCopied

A Chinese businessman with family links to the eldest son of jailed former security czar Zhou Yongkang has been detained by police investigating the collapse of Sichuan Trust, which was taken over by the provincial government and banking regulator last year amid concerns it couldn't repay 25.3 billion yuan ($3.9 billion) of investors' money.

Liu Canglong, who controls companies with a combined 54.2% stake in the troubled trust firm, is being held by the public security bureau in Chengdu, the capital of Sichuan Province, on suspicion of misappropriating trust funds, Sichuan Hongda said in a brief statement to the Shanghai Stock Exchange on Monday. Liu is the actual controller of Sichuan Hongda, although Liu is not a director and doesn't hold any official position in the company, according to the statement.

Liu, 66, controls mining-to-finance conglomerate Sichuan Hongda Group, which has a 32% stake in Sichuan Trust, while a linked company, Shanghai-listed Sichuan Hongda, holds a further 22.2%, public business records show. The two companies were among 19 entities named and shamed by the banking and insurance regulator in May as having committed "significant violations of laws and regulations" as shareholders of banking and insurance institutions, including illegally appropriating trust firms' capital and funds belonging to investors.

The China Banking and Insurance Regulatory Commission (CBIRC) has been targeting trust companies as part of a broader campaign to defuse risks, especially stemming from shadow banking, that could spread through the financial system and cause instability. The trust industry has played an important role in shadow banking by providing loans to higher-risk companies and those with difficulty obtaining credit from banks. But the authorities have become increasingly concerned about the potential risks in the once-freewheeling and lightly regulated sector following a series of scandals and defaults involving billions of yuan.

In 2019, nearly one-third of 68 licensed trust companies were punished by regulators for a wide range of violations, including conducting illicit off-balance-sheet lending, with fines amounting to 22.5 million yuan.

In February, the CBIRC pledged to continue its crackdown on the trust industry this year, with a particular focus on curbing trust financing and channel lending, amid concerns about mounting risks in the sector.

Sichuan Trust is among the most high-profile problematic trust firms. Its failure to pay the principal and yield on several trust products in May 2020 triggered protests from investors and a credit crisis that in December led the Sichuan provincial government and the Sichuan branch of the CBIRC to take control of the firm, sending in a team to supervise its operations and push for a management shake-up.

The company has yet to repay about 25 billion yuan that investors put into its "trust of trusts" investments, which buy into other trust products that have invested in a wide variety of assets, including bonds, stocks, as well as loans to private companies and local government financing vehicles.

An audit by accountancy firm KPMG Advisory (China) found a capital shortfall of more than 30 billion yuan in the company's books at the end of April 2020, a source close to the trust firm's management has previously told Caixin, although Sichuan Trust claims a shortfall of 25 billion yuan.

In March, Sichuan Trust was fined 34.9 million yuan for conducting quasi-shadow banking businesses and issuing illicit loans, marking one of the biggest fines ever levied on a Chinese trust company. It was found to have illegally transferred money in trust products to its shareholders and related parties, among other violations.

He is a cousin of Sichuan tycoon Liu Han, who was executed in 2015 after being convicted of a host of gang-related crimes, including murder. Liu Han was a business partner of Zhou Bin, the eldest son of Zhou Yongkang, who was jailed for life in 2015 for taking bribes, abusing his power and leaking state secrets.

The elder Zhou, a former member of the Politburo Standing Committee, the Chinese Communist Party's top decision-making body, is the highest-ranking party official so far to be caught in the country's long-standing corruption campaign. He headed China's domestic security apparatus before retiring in 2012.

Investment income from Sichuan Trust has been a significant contributor to Sichuan Hongda's net profit in recent years. In 2019, the trust firm accounted for Sichuan Hongda's entire profit, bringing in 145.9 million yuan, which wiped out losses from other activities and gave it an overall net profit of 84.5 million yuan, according to the listed company's annual report.

Huang Ang and Sha Sha contributed to this story.