Emergency services operate in the rubble of a collapsed building near a medical university in Central China in late April. The deadly disaster and others like it have shone a spotlight on illegal "self-builds."
TAN JIANXING, WU HONGYAO and DENISE JIA, CaixinMay 24, 2022 15:04 JST | China
CopyCopied

Shortly after noon on April 29, Wang Yue, a student leader at Changsha Medical University in Changsha, the capital of central China's Hunan Province, was told to check the whereabouts of other students in her department. She couldn't reach her friend surnamed Li by phone and later learned that Li went to lunch at a restaurant outside the school.

Wang didn't see Li in an afternoon class. It turned out that Li was among 54 people killed in the collapse of an eight-story building adjacent to the school that housed several restaurants, including the one where Li had lunch that day.

The cause of the disaster remains under investigation, but local prosecutors said they authorized arrests in the collapse of 11 people, including building owner Wu Zhiyong, 40, and three people in charge of the building's design and construction. They are suspected of illegal construction of additions to the building that caused the accident, according to prosecutors. Five people from a local engineering inspection company were suspected of providing false documents regarding the building's safety.

President Xi Jinping called for safety inspections nationwide to identify and eliminate potential safety risks from such structures, known as "self-builds," or buildings that have been modified by the owners rather than constructed by developers. In recent years, a number of self-builds have collapsed, resulting in significant casualties, state-run broadcaster CCTV reported. The causes of many of the disasters were found to be related to the illegal construction of additions.

The collapsed building in Changsha was located on a busy, quarter-mile-long business street, known to locals as "Back Street One," just outside the north entrance of Changsha Medical University. As the street is close to student dormitories, restaurants and other venues there mainly attract students. The catastrophe happened around 12:24 p.m., the peak time for restaurants. Many of the victims were students.

After the medical school was moved from Hengyang to its current location in Changsha in 2001, the surrounding rural areas were gradually developed into residential and business zones. Many of the buildings in the area were so-called self-builds constructed by local rural residents, who then leased some of the buildings to business owners. On Back Street One, the closer the stores are to the school entrance, the higher the rents are, according to residents. Rescuers pull a survivor from the collapsed building in Changsha.

Buildings have grown taller and taller over time. At first, most structures had one or two stories. Additions on top of the buildings have been common in recent years, a local restaurant owner said.

Several residents told Caixin that the building that failed originally had three floors and was expanded to five in 2012. A street view on a Baidu map showed it had five floors in 2014, but a bird's-eye view video uploaded in August 2019 showed that two more floors had been added.

Buildings only as tall as five stories are permitted in the neighborhood, according to local landlord Chen Ping, though an attic would be allowed at the top. A restaurant owner said many of the nearby buildings were expanded to five floors around 2012. Caixin reporters found many buildings with more than five stories.

Caixin didn't find local official documents on the maximum height of self-built structures. A trial rule implemented in 2016 on building houses for urban and rural residents in the Wangcheng district of Changsha requires that the number of building floors in residential demolition and resettlement communities be examined and approved by local urban and rural planning bureaus.

Applicants wanting to build additions to existing structures must provide safety appraisals, construction plans drawn up by qualified architects and written opinions of neighbors, according to the 2016 rule. The document also lists the responsibilities of different departments, such as neighborhood committees, urban planning departments and land and housing administration bureaus. There is no official statement on whether additions to the collapsed structure obtained approval.

National regulations stipulate that any buildings of more than three floors with a total area of more than 300 sq. meters and investment of more than 300,000 yuan must be regulated. In this case, the official investigation hasn't determined which regulatory link failed. Local business owners and residents said they think supervisory departments failed to fulfill their responsibilities because the collapsed building wasn't the only one with illegal additions.

The collapsed building was structurally modified to varying degrees by tenants, and an elevator added later is also believed to have affected the structure of the building, authorities said in a statement.

On-site photos show that the building collapsed vertically with the top of the structure sitting on the lower part and the color-coated steel roof remaining intact on top of the rubble. The structure fell from top to bottom rather than to the side, Chen Dachuan, professor of civil engineering at Hunan University and deputy head of the rescue team working at the site, said on Hunan Satellite TV.

This type of collapse is because the vertical weight exceeds the designed load capacity, according to architects. Excessive vertical weight can cause small cracks in a brick. As the weight increases and approaches load capacity, these small cracks quickly expand and form several penetrating cracks, which divide the masonry into several small columns. Under too much weight, the masonry bulges out and leads to the destruction of the walls. The impact effect of a partial area collapse leads to the collapse of the whole structure, known as a "sitting down" fall, architects said. An aerial shot of the collapsed eight-story building in Changsha that had housed several restaurants and a hotel.

In fact, such disasters are not unavoidable. Just two weeks before the collapse, Xiangda Inspection Co. conducted a safety appraisal of the Pinhe Hotel, which leased the fourth to sixth floors of the building.

Xiangda inspected 20 to 30 hotels in April before the hotels opened for business, several hotel operators on Back Street One told Caixin. Two operators said they paid 700 yuan for each inspection. One inspector had just a brief look at the hotel and left, said one owner, who said the inspection report was not reliable.

According to the inspection report on Pinhe Hotel, the safety level of the building structure was rated as "Bsu," the second-highest grade, meaning "basically sound."

The inspector failed to conduct a comprehensive structural review of the entire building, the history of the original structure or its main vertical components, according to a structural engineer at a local architectural firm. The inspection was "very unprofessional and bold, and completely violated the rules," the engineer said. Safety inspections must be conducted throughout an entire building, he said.

"You can't just look at certain floors," he said.

Some experts also challenged Xiangda's qualifications. The Guangzhou municipal government requires that a building safety appraisal company must have at least one registered structural engineer and two related professional technicians registered with the government, an expert from the Guangzhou Housing Safety Appraisal Association told Caixin.

Changsha municipal housing safety administration rules require that safety appraisal firms have professional and technical personnel, professional equipment and facilities in line with the relevant national regulations. But the rules do not specify qualification requirements.

The disaster and similar deadly collapses in recent years are sounding a warning bell for many more buildings with potentially dangerous additions.

Months later, a restaurant building collapsed in Linfen, in the northern province of Shanxi, killing 29 people and wounding 28 others. Authorities said the building was self-built by villagers around 1982 and was modified several times since. 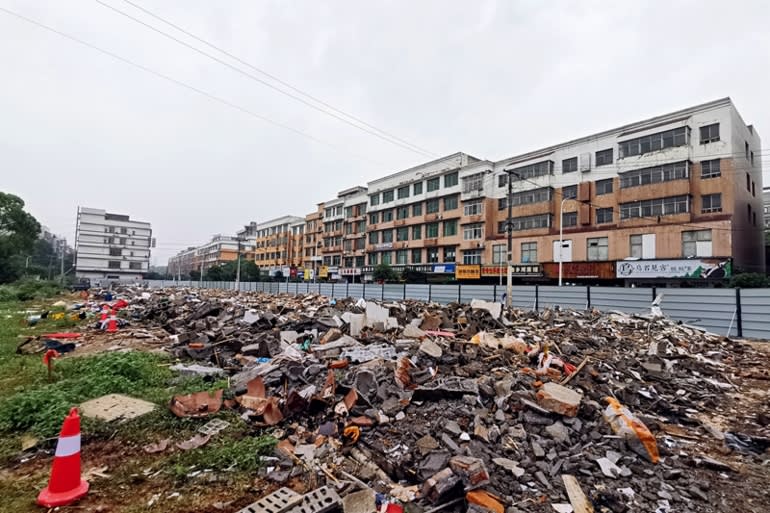 A group of illegal buildings outside the entrance of Hunan University and Technology and Business were demolished in late April.

The Changsha government launched a campaign to inspect and demolish illegal self-builds, with a focus on business streets near college campuses. On May 10, local authorities tore down a group of illegal buildings made of tin shacks outside the entrance of Hunan University and Technology and Business.

The campaign has also expanded to the whole of Hunan Province. The provincial government announced a plan May 16 to conduct a 100-day safety inspection of self-built structures in key areas, including those around schools and hospitals, especially those with at least three floors and involving more than 10 tenants.

The north gate of Changsha Medical University leading to Back Street One has been closed. The street may not exist in the future, a student said.

"If it's still there, whenever I see it, it will remind me of the despair of those buried in the rubble," she said.

At the request of the interviewees, the names of students, business owners and landlords are all aliases.