China will return around 1 trillion yuan of VAT credits to micro and small enterprises between April 1 and June 30 to boost a slowing economy.   © Reuters
ZHANG YUKUN and CHENG SIWEI, CaixinMay 21, 2022 09:33 JST | China
CopyCopied

A new value-added tax (VAT) refund policy to help struggling small businesses had a devastating impact on the budgets of many local governments in its first month of operation, official data show, underscoring the financial cost of shoring up the economy amid the worst wave of COVID-19 outbreaks since early 2020.

Several cities in eastern and southern China saw their fiscal revenue plummet in April after the new VAT credit refund went into effect, government data show. The changes are adding pressure on local finances already suffering from a slowdown in growth that is crimping tax receipts from corporate profits and consumption.

Revenue flowing into the general public budget of Shenzhen, a southern manufacturing and export hub, slumped 44.2% year on year last month to 25.5 billion yuan ($3.8 billion), according to Caixin calculations based on government data. In Suzhou, a city neighboring Shanghai, fiscal revenue tumbled 49.6% year on year to 14 billion yuan, with income from taxes plunging 51.3% to 12.5 billion yuan, while in Wenzhou, an industrial port city in the eastern province of Zhejiang, general public budget revenue and tax revenue slumped 74.5% and 84.2%, respectively.

Revenue of the general public budget for both central and local governments plunged 41.3% year on year in April, data released by the ministry on Tuesday showed.

"Overall fiscal revenue growth fell in April, which mainly resulted from the implementation of the [Communist] Party Central Committee and the State Council's tax reduction and refund policies by finance and tax authorities at different levels," Xu Hongcai, a vice minister of finance, told a Tuesday news briefing on China's tax reforms.

This is a proactive fiscal move to address downward pressure on the economy and though it will reduce fiscal revenue, it will increase the revenues of enterprises and the vitality of the market, he said, noting that in April, about 800 billion yuan in VAT refunds -- equivalent to 37.5% of national general public budget revenue in April 2021 -- was paid to businesses. 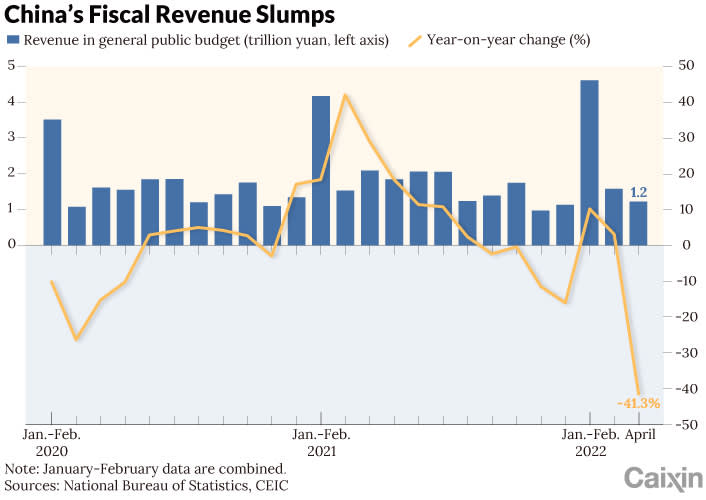 Excluding VAT refunds, the decline in national general public budget revenue was just 5.9% in April, according to the Ministry of Finance, underscoring the impact of the tax reduction and refund policies.

The Ministry of Finance will continue to implement tax reduction and refund policies to stabilize the macroeconomy and ensure the economy operates within a reasonable range, Xu said at Tuesday's briefing.

China is relying heavily on tax cuts and refunds to help businesses cope with slowing economic growth and COVID-19 lockdowns that have hit eastern China particularly hard. On March 21, Premier Li Keqiang announced that the government would return around 1 trillion yuan of VAT credits to micro and small enterprises (MSEs) and the self-employed between April 1 and June 30 to stabilize economic development.

Starting April 1, new VAT credits will be refunded monthly and from July 1, enterprises in some sectors, including manufacturing, electricity and transportation, will start getting the refunds they are owed, with all outstanding payments to be made by the end of December. For the full year, the total amount of VAT credits refunded to businesses will be around 1.5 trillion yuan, the State Council said.

China has been reforming its VAT system for several years. As part of changes implemented since 2018, companies that pay more VAT on inputs -- the resources they use to make their goods -- than on outputs -- the finished products -- are entitled to VAT credits. Companies needed to apply for refunds, which were paid to them months or even years later. Most only received a certain percentage of their new credits, usually 60%, although some companies in advanced manufacturing could receive the full amount.

By ordering local tax bureaus to repay outstanding credits to MSEs by the end of June and new credits monthly starting in April, the government is trying to help companies cope with liquidity problems caused by lockdowns and the economic slowdown. The central government promised 1.2 trillion yuan in special transfer payments to support local governments in implementing VAT credit refunds and tax and fee cuts with the aim of ensuring local fiscal resources are not squeezed too heavily.

Caixin has learned from other sources that though the central government will pay for some of the VAT credit refunds for micro, small and midsize companies, it will not help much with refunds due large companies in the second half of the year, which means the fiscal resources of cities with large corporates may be put under additional strain.

The general public budget is a major component of a local government's overall fiscal resources, and its revenue comes mainly from taxes. VAT credit refunds are directly deducted from tax revenue rather than listed as fiscal expenditure, so a negative tax revenue figure means the government paid out more in refunds than it took in as revenue.

The VAT policy and deferred tax payments were the main reasons for the 12.6% year-on-year decline in revenue in Shenzhen's general public budget in the first four months of 2022, the city's finance bureau said in a statement last week. The city handed out more than 24 billion yuan in VAT credit refunds to 59,400 businesses.

Shenzhen gave out around 15 billion yuan in VAT credit refunds, deferred around 2.5 billion yuan in tax payments, and reduced taxes for companies by at least 1.3 billion yuan in April, analysts of Huachuang Securities wrote in a Sunday report. Since the year-on-year drop in Shenzhen's general public budget revenue that month amounted to slightly over 20 billion yuan, the decline in tax revenue was the main reason, they said.