China struggles to balance green goals with keeping lights on 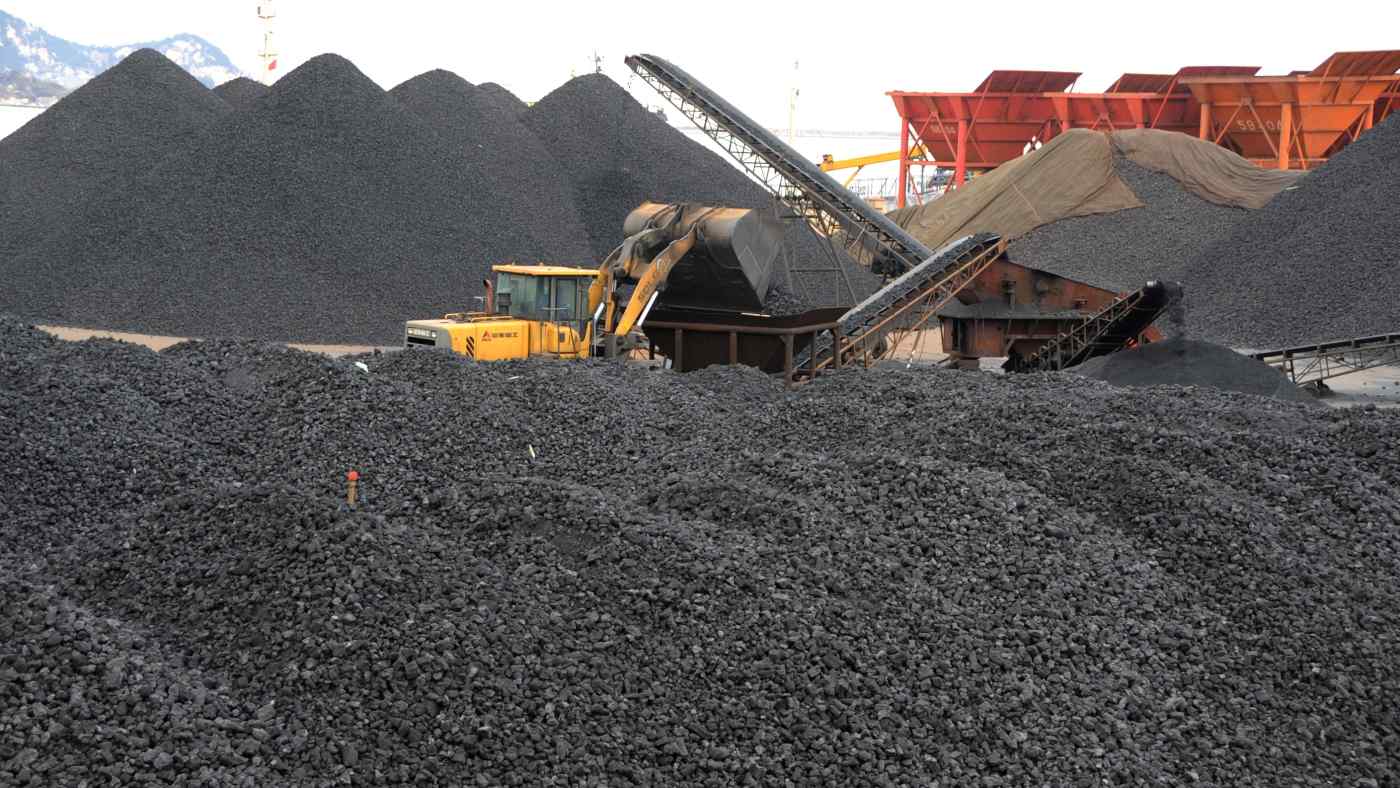 The power crunch that is hitting businesses and homes in many parts of China reflects the struggle of the world's largest coal burner to reconcile its goal of slashing greenhouse gasses with an appetite for energy to drive its economy.

The world's second-largest economy is consuming far more electricity than expected in order to keep factories running as businesses rebound from the pandemic. But production of coal -- the main fuel for generating electricity in China -- is slowing under the government's policy to achieve carbon neutrality by 2060.

Nearly 70% of China's electricity comes from coal, the burning of which emits massive amounts of carbon dioxide, the greenhouse gas mainly associated with global warming. Generating power accounts for 53% of the country's coal consumption.

In the first eight months the year, China produced nearly 2.6 billion tons of coal -- up just 4.4% from a year ago as production was slashed on safety and environmental concerns. During the same period, the country's power consumption surged 13.8%.

This mismatched pace of growth led to a widening shortfall of coal for keeping up with demand for electricity, pushing prices to levels that power plants could not afford. 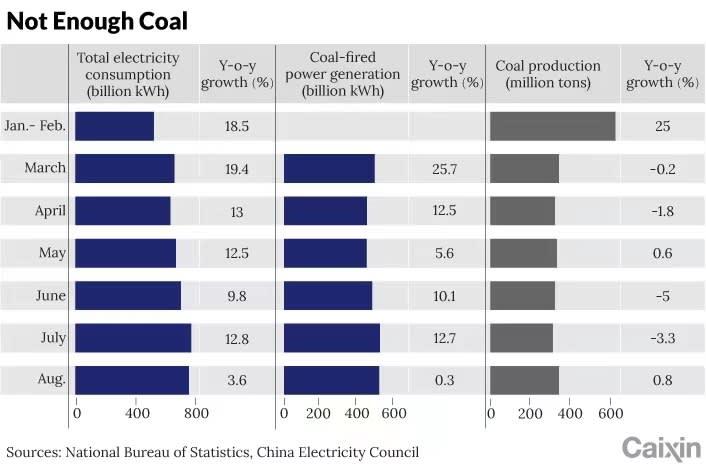 Coal prices in China began rising in May 2020 as the COVID-19 pandemic eased domestically. During the winter heating season, benchmark 5,500 kcal/kg grade thermal coal traded as high as 1,000 yuan ($155) per ton in northern China, the highest in a decade.

After retreating in early 2021, coal prices entered an unprecedented upward trajectory in late February. As of Sept. 28, the most-traded thermal coal futures contract on the Zhengzhou Commodity Exchange rose to 1,253.8 yuan per ton -- up 90% from 671.4 yuan on Jan. 4.

Soaring coal prices are wiping out power plants' profits. According to a study by the China Electricity Council (CEC), 70% of coal-fired power plants were operating at a loss in June as the cost of coal surged more than 50% from a year earlier. Huadian Energy, one of the largest generators, posted a net loss in the first half that nearly doubled from a year before to 523 million yuan. Beijing Jingneng Power recorded a 300 million yuan net loss during the period, reversing a net profit of 841 million yuan for the previous year.

The power generator's troubles also reflect a state-led power pricing regime that limits power plants' ability to raise prices even when squeezed by rising costs. According to Sinolink Securities, when coal prices top 800 yuan per ton, coal-fired power plants on average lose 0.03 yuan for every kilowatt-hour of electricity as production costs exceed the state-set power tariff. This means many generators have to cut output at a time when supply is already short. The government moved this week to lift curbs on electricity pricing.

This year's coal crunch reflects misjudgments on supply and demand by policymakers and market investors, analysts said. "Soaring global orders and increased domestic construction have both pushed up [energy] demand that exceeded policymakers' expectations," said Chai Linmin, a researcher at the National Center for Climate Change Strategy and International Cooperation.

The export boom this year beat many forecasts. China's customs administration published data for the first nine months showing that exports climbed 22.7% from a year earlier. "No one predicted that exports would perform so well," one analyst said.

Beijing's goal of reducing carbon emissions means a large portion of the country's coal production capacity will be phased out in coming decades, a process that will test policymakers' wisdom and determination, analysts said. Without proper measures, the current trend will push coal prices as high as 2,000 yuan per ton, further worsening the coal shortage and the power crunch, they said.

"The main issue this year is the growth of demand for coal exceeded the growth of supply, causing an imbalance," said a person close to policymakers.

In the first eight months of this year, China's power consumption rose 13.8% year on year to 5.47 trillion kWh, data from the National Statistics Bureau showed. During the period, major coal-fired power plants generated 3.87 trillion kWh, up 12.6% from the same period last year.

While the post-pandemic business recovery and recovering overseas demand drove up power consumption in China, the supply of coal did not keep up. During the first eight months, China's coal consumption rose 10.7% to 2.1 billion tons, but domestic production grew only 6.4% to 1.95 billion tons. Meanwhile, coal imports declined 19.7%. About 90% of China's coal comes from domestic mines, which have come under mounting regulatory scrutiny for safety and environmental impacts in recent years. In 2020, a crackdown on substandard mining operations slashed coal production by 11% in the Inner Mongolia autonomous region, one of the largest coal mining regions in China.

In early summer, several coal mines with total annual capacity of 20 million tons were shuttered in Central China's Henan Province after a series of deadly accidents. Another mining province, Shandong, plans to close mines with a combined capacity of 31.6 million tons by the end of this year on safety concerns. Coal mines in many places have also been hit by production restrictions under the government campaign to cut emissions and energy consumption.

Coal imports, meanwhile, are shrinking as prices climb amid the global recovery. A CEC price index tracking China's coal imports showed that the average price between Sept. 16 and Sept. 23 reached 1,283 yuan per ton, up 162.9% from the same period a year ago. In the first eight months, China imported 198 million tons of the fuel, down 10.3% year-on-year. The National Development and Reform Commission (NDRC) since April has taken steps to deal with the worsening supply shortage, including releasing strategic reserves into the market, speeding up approvals of new facilities, and ordering production hikes.

But the effects have so far been limited, partly reflecting the lack of new production capacity that can be put into use, analysts said. China's construction of new coal mines has been declining after years of efforts to reduce overcapacity. According to the China National Coal Association, coal mining capacity stood at 5.19 billion tons by the end of 2019, including 3.9 billion tons in operation and 1 billion tons under construction. That compared with 5.7 billion tons of capacity at the end of 2015.

"It usually takes two to three years to complete construction on a coal mine," said Zeng Hao, chief analyst at Shanxi Jingzhen Energy Technology Group. "How much capacity you can increase now depends on what was invested a couple of years ago."

According to Yuan Jiahai, professor at North China Electric Power University in Beijing, annual coal consumption in China will drop to between 400 million and 500 million tons by 2060 as the fuel will mainly be used as a supplement for power generation. That means a dramatic cut in consumption from today's 4 billion tons a year.

Analysts project that coal will remain the main fuel for generating electricity in China for the next four years because of unresolved technological issues in renewable energy. Installed coal-fired power capacity will start declining after 2025, they said.

"The changes will be dramatic over the next 40 years," said Kang Junjie, an energy expert at Peking University. Technology development will be the biggest driver, and carbon neutrality can be achieved only with breakthroughs in key technologies such as energy storage and carbon capture, Kang said.

Industries relying on coal as an energy source will also need significant revamping of technology and production, analysts said.

The path to downsizing coal consumption will have a profound impact on local economies, especially in regions with a heavy dependence on coal mining, like Shanxi, Inner Mongolia, Shaanxi and Xinjiang.

Provinces need to start the economic transition as soon as possible to find new growth sources and work out policy arrangements to help settle businesses and people affected by the immense transformation, Yuan said.