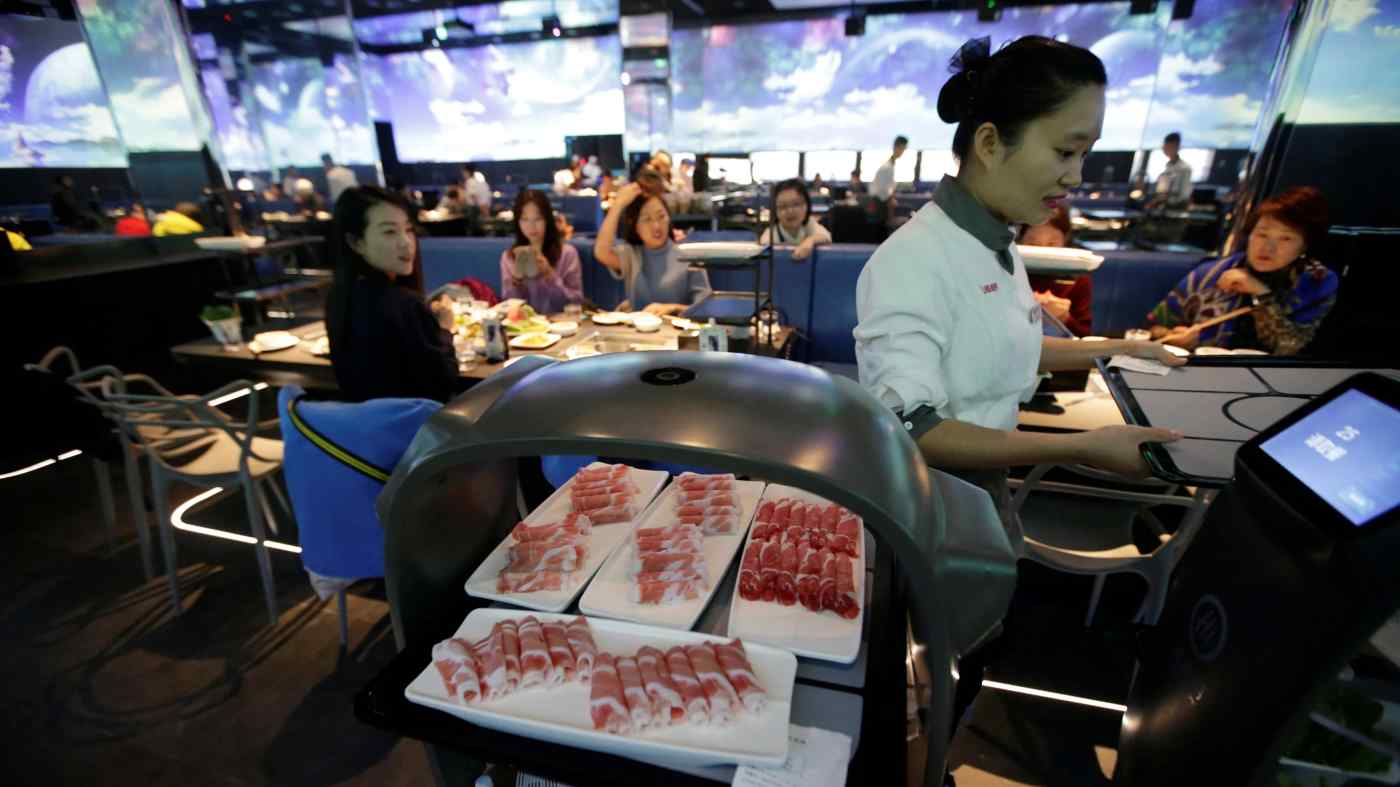 A robot serves meals at a Beijing restaurant in November 2018. Restaurant sales have plunged during what is usually the busiest time of the year.   © Reuters
WANG JING and DENISE JIA, CaixinFebruary 4, 2020 15:20 JST | China
CopyCopied

The coronavirus, which has already killed more than 400 people and infected more people than the SARS outbreak in 2003, has brought large parts of the country to a standstill. Chinese people are being forced to stay home, cancel travel and avoid gatherings, hammering the service industries.

Restaurants and retailers recorded sales of more than 1 trillion yuan in the seven days of the 2019 Lunar New Year's holiday. Just half of that total is expected for the 2020 holiday, estimated Ren Zeping, chief economist and director of the Evergrande Think Tank.

A manager at a restaurant in Guangzhou told Caixin that it usually averages 500,000 yuan in daily sales during the holiday, but this year it has lost millions of yuan.

Haidilao International Holding, China's largest hotpot chain, said Tuesday that it would close all of its locations on the mainland until Friday. As of the end of June, Haidilao operated 550 restaurants in 116 cities in mainland China. Jiumaojiu Group, another Hong Kong-listed restaurant operator, said it would close its more than 300 restaurants till Feb. 9.

As many small and medium restaurant operators suffer from lost revenue, an industry group in Guangzhou Thursday called for landlords to waive and reduce rents to businesses "to tide over the difficult time together." In a letter to landlords, the Association of Guangzhou Property Leasing Industry urged that they waive rent for February and cut rents in half for the next two months.

But these measures may not be enough to ease the financial pressures on restaurant operators. Rents usually account for 10%-15% of restaurants' revenue, while labor costs could amount to as much as 20%-30%.

The manager of the Guangzhou restaurant told Caixin that the first thing he needs to do after the holiday is to raise money to pay employees. If the restaurant can't obtain financing support, it may go out of business, the manager said.

The China Banking and Insurance Regulatory Commission (CBIRC) issued a notice Sunday requesting banks not to cut off loans and to appropriately lower lending rates to retailers, restaurants, hotels, logistics and tourism companies heavily affected by the coronavirus epidemic.

The tourism and movie industries are taking an even harder hit after travel agencies were told to suspend all tour groups, major tourism spots were closed and all eight movies scheduled to debut during the holiday were withdrawn.

Compared with 2003, when the SARS outbreak knocked off 2 percentage points of quarterly GDP growth, the proportion of consumer consumption in GDP today is much higher, meaning the epidemic will have a greater impact on the economy, Evergrande's economist Ren said.

As it is still unclear when the coronavirus outbreak will wind down, economists have issued varied estimates of its economic impact. Wei Shangjin, a professor at Columbia Business School and a former chief economist of the Asian Development Bank, is relatively more optimistic.

Wei, who estimates a decline of 0.1 of a percentage point in 2020 GDP growth, said most of the offline retail loss will be offset by increases in online shopping as China has entered the era of internet commerce. During the SARS outbreak in 2003, many economists overestimated the negative impact on the economy, Wei said.