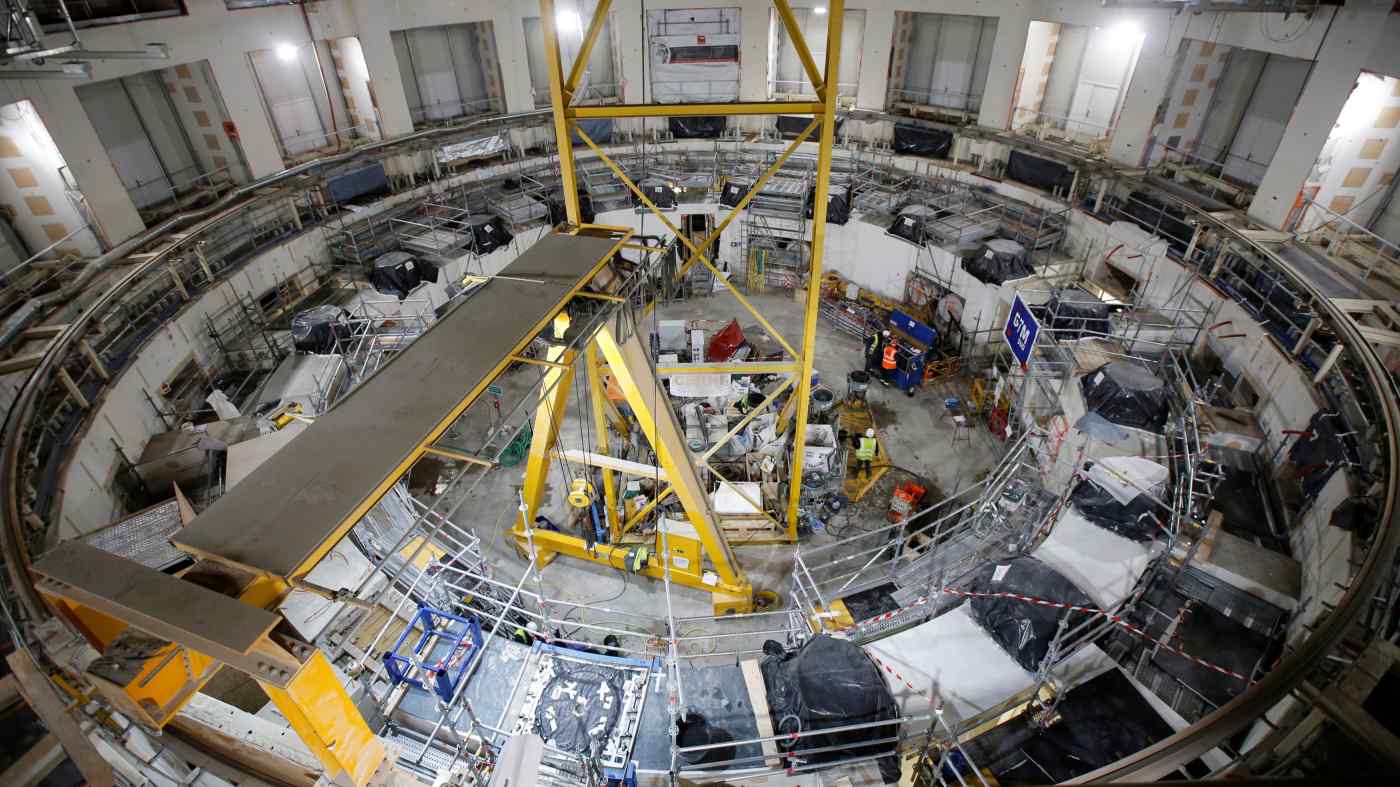 With multi-ton components shipped from China and other parts of the world, workers at a dusty construction site in southern France are rushing to assemble the world's largest and most expensive nuclear fusion experiment.

The project, called the International Thermonuclear Experimental Reactor (ITER), is being built to test whether the long-sought dream of nuclear fusion -- the atomic reaction that powers the sun -- can be harnessed to generate near-limitless clean energy.

The assembly milestone came belatedly in late July after multiple delays due to financing and technical divisions among its 35 partners. But the Chinese team, according to the scientists there, has never gone off schedule in providing key components and getting the job done.

Their goal is not only to participate, but also to learn alongside their peers to help China create its own thermonuclear fusion reactor, scientists said.

Huo Yuping, a scientist at the Chinese Academy of Sciences, said that China had two things in mind when it joined the ITER project in 2003. The first was the project's invaluable contribution to future power plants, and the second was China's hope to use the experience to cultivate its talent and eventually become one of the first countries to build its own fusion reactor.

Harnessing fusion has been a dream of scientists for decades. While conventional nuclear power relies on fission -- splitting atoms to produce energy -- fusion combines atoms to create an immense burst of energy.

With the goal of harnessing this power, a consortium of countries launched the ITER in 2006, with the European Union taking a 45% stake in the project. The U.S., China, India, Japan, Russia and South Korea each have a 9% stake.

Despite slight delays due to the coronavirus, the ITER announced the start of assembly on the tokamak, the donut-shaped machine where the reaction will take place, on July 28. Once completed, the tokamak will weigh 23,000 tons -- more than twice the weight of the Eiffel Tower -- and be made up of more than 1 million components.

In theory, if the ITER works, it will lay the groundwork for an abundant new type of energy that doesn't produce planet-warming emissions or the hazards of conventional nuclear power. Nuclear fusion has the potential to solve the world's energy problems. However, it remains unfeasible as a source of power. Fusion experiments usually require superheating a soup of atoms, known as plasma, inside the tokamak. It's not difficult, but how to keep the reaction going under a high temperature and convert the heat to electricity has eluded scientists for decades.

ITER has also suffered multiple delays due to component construction and design disputes. With construction initially planned to start in 2016 at a cost of around 5 billion euros ($5.8 billion), the project's price tag has roughly quadrupled, and the first test of its superheated plasma has been delayed until 2025. Full-power fusion experiments are not expected to take place before 2035.

Moreover, amid ongoing anti-globalization sentiment, concerns are growing that countries will be more reluctant to cover the ballooning costs. For example, the U.S. has for years been cutting its contribution to the project by hundreds of millions of dollars, said Wu Songtao, a top Chinese engineer with the ITER.

ITER was first proposed at a U.S.-Soviet summit in 1985, but China didn't sign on to participate until 2003, when other countries wavered in financing the $23 billion project. Although the ticket price -- 5 billion yuan at the time -- was a huge amount for the developing country, China saw it as an opportunity to boost its domestic nuclear fusion industry.

At that time, a backlash among experts inevitably emerged against the costly project due to the country's then weak nuclear fusion research. In a letter to the country's leadership, some academics wrote: "What can elementary school students learn by going to college?"

But Huo, who strongly advocated for China's participation, said the mega project amounted to "a global fusion club," whose ticket price would only go up as time went on. Meanwhile, he pushed the government to fund domestic fusion research in the same amount it gave to the ITER.

Wu said that the Chinese team at the ITER is now the best-funded of the seven parties. "Overall, we have done a good job, achieving great progress despite a lot of money spent. If we hadn't done so, we would have failed our country and the taxpayers," he added.

Wang Min, deputy director of the China International Nuclear Fusion Energy Program Execution Center (ITER China), told Caixin that China has made faster and better progress than its partners. "A great deal of young Chinese talent has been nurtured in the ITER program ... China has amplified its voices and contributed more wisdom to the nuclear fusion world," Wang said.

Much left to do

Despite being a latecomer to the technology, China's development of nuclear fusion has proceeded in leaps and bounds, experts said. ITER has played an important role in that progress.

"Before joining ITER, Chinese voices were barely heard at international fusion conferences. But after doing so, China has gradually moved to the center of the world stage of nuclear fusion," Luo Delong, director-general of ITER China, told the state-owned Science and Technology Daily in an August interview.

A milestone in China's development of fusion technology is the construction of the Experimental Advanced Superconducting Tokamak (EAST), a nuclear fusion reactor dubbed the "artificial sun."

Around the globe, physicists are trying to control the nuclear fusion reaction, but none has held it steady as long as the team in Hefei, capital of East China's Anhui province. In April, for the first time, the EAST team managed to run the machine at 100 million degrees for up to about 10 seconds.

China's EAST is similar to ITER, yet smaller and more flexible. The research carried out there will provide "direct experience for the construction" of ITER and serve as "an important experimental test bench" for conducting ITER-related experiments, according to the website of the Institute of Plasma Physics at the Chinese Academy of Sciences.

The next stop on China's roadmap for fusion-generated power is to build a test reactor in 2021 called the China Fusion Engineering Test Reactor (CFETR), and start to build the commercial plants by 2050. Of similar size to ITER, the reactor aims to grapple with some of the unsolved technological issues remaining with ITER.