The scandal comes as AMTD Group, whose listed subsidiary calls itself the No. 1 independent investment bank and asset manager in Asia, continues to expand. Since Choi took over in February 2016, AMTD Group has transformed itself from a small mortgage lender into a financial conglomerate with businesses ranging from investment banking and asset management to insurance brokerage and equity investment.

Following its subsidiary AMTD International's initial public offering in New York in 2019, and a second listing in Singapore earlier this year, the group was planning to list its fintech business in Hong Kong in 2020, Choi told a Hong Kong newspaper in April.

Before heading AMTD Group, the 42-year-old Choi worked at Citigroup, PricewaterhouseCoopers Hong Kong and UBS AG. At UBS, He worked hard and was demanding. He was sometimes willing to take compliance risks to achieve goals, according to a former colleague, who spoke highly of his competence.

Choi got to know Dong Wenbiao, then chairman of China Minsheng Banking Corp. and founder of CMIG, when he participated in one of the lender's financing projects years ago, people with knowledge of the matter said. The pair later developed an extraordinarily close business relationship, especially when Choi worked for UBS, where he most recently served as managing director of its investment bank division, multiple financial industry insiders said.

Cofounded in 2003 by CK Hutchison Holdings, a Hong Kong-listed company owned by billionaire Li Ka-shing, AMTD Group was later controlled by a subsidiary of U.S. investment bank Morgan Stanley until 2015.

In 2015, AMTD Group brought in CMIG, one of China's largest private investment firms, and L.R. Capital Management Co. (Cayman) as major shareholders, who bought a combined 71% stake, according to an AMTD Group bond prospectus from March 2016. Choi's parents held stakes in L.R. Capital and a related company in 2015, according to Bloomberg News.

AMTD Group said in the filing that the growth of its investment banking business would hinge partly on its ability to take advantage of the relationships and businesses of CMIG and L.R. Capital.

The rapid expansion of AMTD Group was largely backed by CMIG, knowledgeable sources told Caixin. CMIG entrusted the company with billions of yuan intended for investments, but didn't get much of it back, they said.

"Some projects [undertaken with funds from CMIG] actually made money, but he didn't give us the profits. Some had losses, but we don't know whether he truly invested or misappropriated the money," a CMIG senior executive said.

CMIG has been trying to get its money back from Choi since 2018, the year Dong stepped down as chairman, company insiders told Caixin. Company management vowed to "send Choi to jail" if he failed to return its funds, an insider said.

In August, after CMIG publicly accused Choi in Hong Kong of defaulting on his repayments, Choi released a statement that didn't directly address CMIG accusations.

At one point, Choi owed CMIG about 3 billion yuan ($447 million), though he has since paid back 700 million yuan, the company senior executive recently told Caixin.

The two sides' breakup came in the context of a CMIG liquidity crunch driven largely by its overseas investment failures and poor management.

Founded in 2014, CMIG racked up much of its debt during a subsequent spending spree, typically from its international investment arm, CMIG International Holding Pte., which took some bad bets on several Hong Kong-listed companies, people familiar with the matter said. 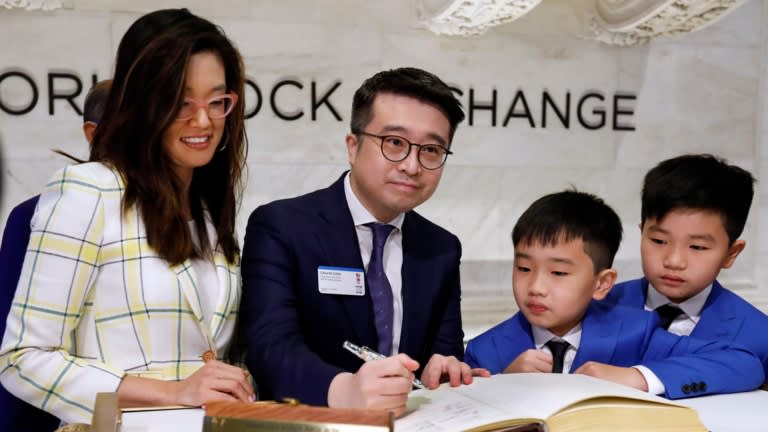 Choi, center, signs the guest book on the floor of the New York Stock Exchange before AMTD's IPO in August 2019.    © AP

CMIG International, which specializes in international investment, is considered to be CMIG's most corrupt and chaotically managed unit, with total losses over its lifetime estimated to total at least 10 billion yuan, the people said. With $2.2 billion in registered capital, the company squandered all of its net assets in a few years, failing even to make it clear how the losses occurred, a former CMIG employee said.

In 2019, CMIG defaulted on a series of yuan- and dollar-denominated bonds, with a number of employees also hollowing out its assets, the people said. To shore up its balance sheet, CMIG began asking debtors, including Choi, for its money back.

After bringing in CMIG and L.R. Capital as shareholders in 2015, AMTD Group started to develop its investment banking business, including underwriting equity and bond issuances for Chinese mainland companies that were eager to raise money in Hong Kong but didn't have much appeal to overseas investors.

To help explain things, an industry insider gave the hypothetical example of a small mainland bank launching an IPO in Hong Kong that is undersubscribed by 200 million yuan. In such a case, AMTD Group would serve as an intermediary to help find financial institutions and local consortiums that can lend 200 million yuan to a company, which then invests in the IPO in exchange for a stake in the bank. After the listing, the company can use the stake as collateral to borrow money from another bank.

AMTD Group's rapid growth indicates that it may be engaging in the kinds of business that large institutions turn their noses up at, such as buying up stocks that no one wants and then thinking up ways to sell them, a Hong Kong investment banker told Caixin.

Meanwhile, AMTD Group has expanded its asset management business through IPO services, such as by asking clients to invest part of their IPO proceeds in its asset management products, the investment banker said. The funds, which often get locked up for several years, can be invested in other IPOs, thus expanding the scale of assets under the company's management, he said.

Choi once acknowledged that the company had managed some of several Hong Kong-listed mainland banks' IPO proceeds. Coincidentally, AMTD Group said in the 2016 filing that it secured a role managing a $300 million investment portfolio for Bank of Qingdao Co. as a result of a "relationship" it developed with the mainland bank after facilitating the lender's Hong Kong IPO in late 2015.

A spokesperson for Bank of Qingdao told Caixin on Friday that all funds raised from its Hong Kong IPO had been transferred to the mainland as required by the State Administration of Foreign Exchange and were earmarked to replenish its capital -- as opposed to being handed over to an outside manager for investment.

In 2017, a company related to L.R. Capital and another investor sold off their stakes in Bank of Qingdao, and then AMTD Group bought roughly the same number of the bank's shares, according to shareholding records disclosed to the Hong Kong Stock Exchange. Later that year, AMTD Group lent a similar amount of the shares to its controlling shareholder, L.R. Capital, which in turn used them as collateral to obtain loans from an undisclosed third party, according to AMTD International's 2019 annual report. The shares lent were worth about HK$1.2 billion ($155 million) at the end of last year.

The third party who extended the loans is Guangzhou Rural Commercial Bank Co., according to public records from Bank of Qingdao and the Hong Kong bourse. In 2017, AMTD Group served as the financial adviser and joint global coordinator for the Guangzhou lender's Hong Kong IPO.

AMTD Group's investment in Bank of Qingdao not only helped its controlling shareholder secure financing, but also enabled its listed subsidiary's to dress up financial statements that would have shown losses.

Last year, AMTD Group signed a derivative agreement with a company owned by Andrew Chiu, a grandson of Hong Kong tycoon Chiu Te-ken. The income generated from the agreement, which was linked to the stock of Bank of Qingdao, contributed over HK$1 billion to AMTD International's profit in 2019. Andrew Chiu holds a stake in AMTD International, where he serves as a vice chairman.

While it has always claimed that its investment in Bank of Qingdao is a strategic, long-term one, AMTD Group in June sold nearly half of its stake in the bank, according to Hong Kong bourse records. On the same day, Ariana Capital Investment, another company founded by Andrew Chiu, acquired exactly the same number of the lender's shares as AMTD Group sold.

Neither AMTD Group nor Ariana has explained the sale and purchase. They have not disclosed whether the trades constituted related-party transactions, either. The spokesperson for Bank of Qingdao said that the transactions were merely market actions and that AMTD Group and Ariana both disclosed the information in a timely manner, based on their obligations to the exchange.