Virus difficult to detect as patients show no clear symptoms 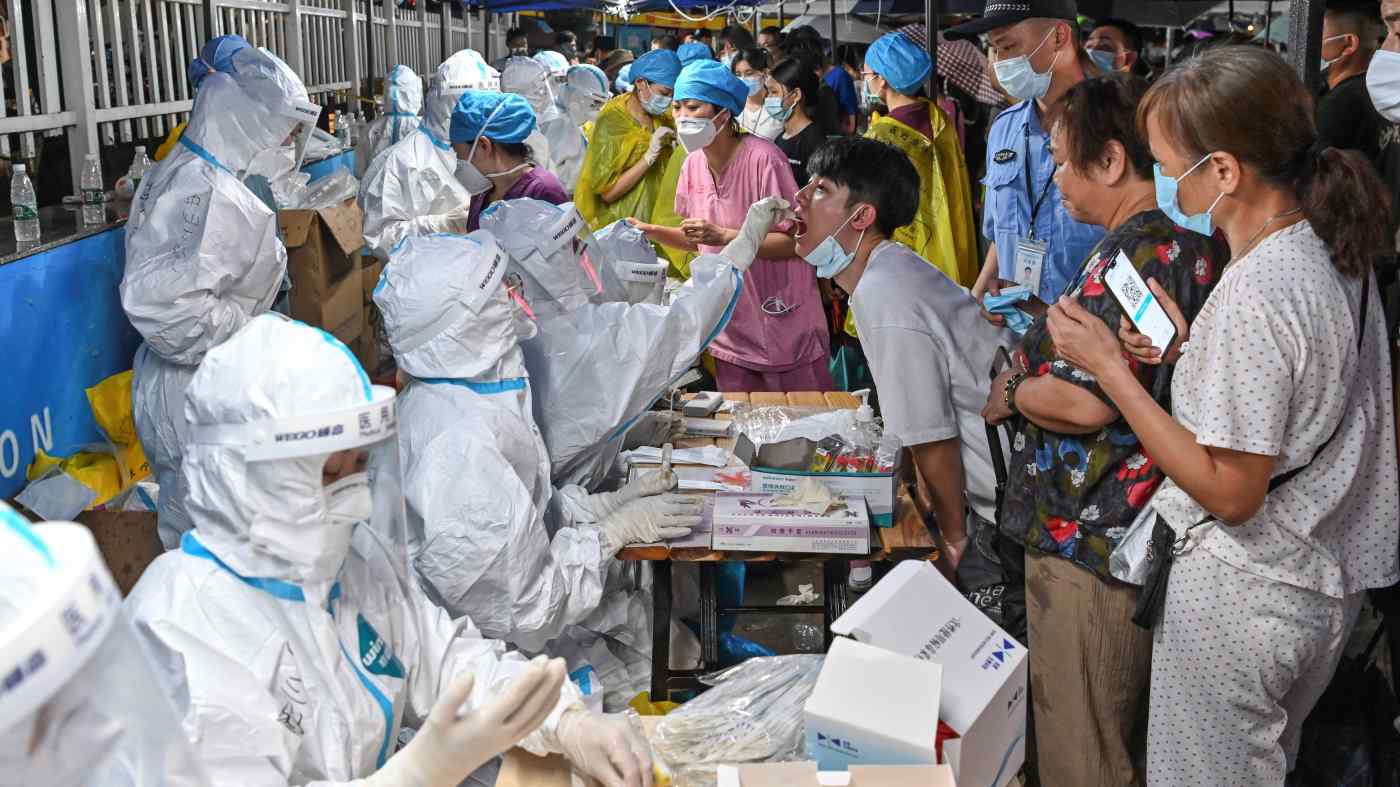 A makeshift testing site for COVID-19 in Guangzhou, China on May 30. All of Guangzhou's 11 districts announced plans to test all residents within three days.   © Reuters
XIANG KAI, WANG JING and HAN WEI, CaixinJune 8, 2021 22:04 JST | China
CopyCopied

Guangzhou in southern China imposed travel restrictions and stepped up mass coronavirus testing as the giant metropolis battles a dangerous COVID-19 variant in one of the country's most alarming flare-ups since last summer.

The industrial and trade hub -- the capital of China's most populous Guangdong Province and home to almost 19 million people -- has reported 64 new infections in two weeks since May 21, plus 13 asymptomatic cases. The cluster, which has been traced to a woman from the city's Liwan district, marks the first community outbreak in China of a highly transmissible strain first detected in India.

As the virus continues spreading in many parts of the world, Guangzhou's efforts to contain the outbreak will serve as an important test for China in addressing the mutating virus, experts said. Caixin learned that the State Council, China's cabinet, dispatched a special expert team to Guangzhou to study the outbreak and virus control measures.

The Guangzhou outbreak is also a real-time trial for COVID-19 vaccines. Some of the patients in Guangzhou had received the first shot of China-made vaccines, indicating that the inoculations may not be effective against the new variant, according to Cai Weiping, chief infectious diseases expert at Guangzhou No. 8 People's Hospital, which is treating COVID patients. But so far, none of those patients' illnesses has turned severe, suggesting the vaccines may reduce the severity of disease, Cai said.

As of May 31, Guangzhou administered more than 13 million COVID shots. About 3.3 million people in the city have completed two-shot vaccinations, official data shows.

While stepping up virus testing, Guangzhou also imposed a quasi-lockdown to restrict people leaving the city. Starting May 31, all people leaving Guangzhou need to be tested for the virus before departure. Meanwhile, residents of 37 residential compounds where infections appeared were told to stay home, affecting 140,000 people. An entry-only and no exit notice is seen posted on a traffic sign after traffic control measures are imposed on the Fangcun area of Guangzhou's Liwan district to control the spread of the recent COVID-19 outbreak on June 4.    © Reuters

The measures are unprecedented for a trade hub like Guangzhou. Even during the worst days of the domestic outbreak in 2020, Guangzhou remained one of a few Chinese cities open to the world. The city's airport received 43.8 million travelers in 2020, making it the world's busiest airport during the pandemic.

The World Health Organization has named the variant involved in the Guangzhou outbreak Delta and listed it as a variant of concern because of its high transmissibility. Since it was first detected in October, the variant has spread to more than 62 countries and regions.

"The variant has a shorter incubation period, faster transmission speed, and higher viral load, making the situation in Guangzhou completely different from the past," said Zhang Zhoubin, deputy head of the Guangzhou Center of Disease Control, at a news briefing last week.

China, the first epicenter of the pandemic, has quelled the virus and largely returned to normal since last summer, although sporadic flare-ups have been reported.

The new variant is a stronger enemy. Contact tracing shows that some of the earliest patients in the Guangzhou outbreak had breakfast in the same restaurant. Some of the patients didn't have direct contact with each other and sat apart in the room, indicating the highly contagious nature of the variant.

This shows that the virus can be transmitted over longer distances, Guangzhou No. 8 Hospital's Cai said. More patients in the current outbreak presented as asymptomatic, Cai said.

"Many of them didn't suffer fever, cough or other symptoms even as their lungs showed infections in CT scans," he said.

That makes nucleic acid testing the most important means for detecting the virus. On May 25, the Liwan district, the center of the latest outbreak, kicked off mass testing of all 730,000 residents. On May 30, the testing was expanded to more Guangzhou districts. The next day, Guangzhou temporarily suspended all public vaccinations to concentrate medical resources on virus testing.

"Speeding up virus testing to cut off the transmission of the virus as soon as possible is the top task for Guangzhou to control the outbreak," said Zhong Nanshan, the 84-year-old pulmonologist who led China's fight against SARS in 2003 and plays a prominent role in the response to the COVID pandemic.

"We have basically figured out the transmission routes" as most of the new cases were traced to the Liwan district, said Li Ming, deputy mayor of Guangzhou at a May 31 briefing. But the origin of the outbreak remains unclear, with experts still debating who might have been "patient zero," the originating case in the flare-up. Several government documents suggest that the cluster started with an imported infection.

Guangdong receives about 90% of all inbound travelers arriving in China every day as authorities limit the arrival of international flights to selected airports. More than 300 quarantine hotels across the province receive inbound travelers who are required to quarantine for 14 days once they arrive in China. About 30,000 people are currently in quarantine in the province, with nearly 20,000 staffers serving at the sites, according to official data.

A 75-year-old woman surnamed Guo living in Liwan is currently known to be the first confirmed patient in Guangzhou's latest outbreak. But how Guo became infected puzzles health experts.

According to government information, Guo experienced a sore throat on May 18 and later had a low fever. She went to a hospital on May 20 and was confirmed the next day to have COVID-19. Guo's husband later tested positive for the virus.

On May 26, a cluster of four family members was confirmed, including a woman surnamed Song who had breakfast on May 19 at the same restaurant as Guo. In the following days, more cases were reported among Song family contacts.

New infections surrounding Guo and Song soon spread beyond the Liwan district. As of June 1, six cases were reported in Foshan, a city neighboring Guangzhou, all of which were linked to cases in Guangzhou. Infections were also found in Maoming, Guangdong Province, and Nanning, in Guangxi.

"The patients have formed a roughly completed infection chain and had close epidemiological links with previous cases," Zhang of the Guangzhou CDC said. "There has not yet been community infections with entirely unknown sources."

Although all of the cases following Guo's infection have been traceable, it remains unclear how Guo contracted the virus. The woman didn't travel outside her community before she was infected.

Liwan's disease control authority said on May 23 that it was likely Guo was accidentally exposed to an inbound traveler with the virus. Guangzhou authorities first targeted a 34-year-old man surnamed Song who returned to China from Rwanda in late April. Song completed the mandatory 14-day quarantine upon arrival at a hotel in Liwan and returned to Nanjing, where he was later confirmed as an asymptomatic patient, according to Nanjing authorities.

But Guangzhou disease control officials later ruled out the possibility that Song was the origin of the latest outbreak, saying an epidemiological investigation didn't find enough evidence. Experts also suspected that another inbound traveler who arrived at Guangzhou from Saudi Arabia in early May could be the origin of the latest flare-up. The 47-year-old man showed symptoms during quarantine in Liwan and was sent to a hospital that Guo also visited the same day, Caixin learned. Samples from the hospital's air conditioning tested positive for the coronavirus, sources said.

Zhou Zixia, deputy head of the Guangdong provincial health authority, said at a summit that the virus could have found its way to spread when the patient was transferred from the quarantine hotel to the hospital for treatment, a video shows.

But health authorities have not reached any conclusion. In a recent interview with state broadcaster CCTV, Zhang said the search for patient zero in Guangzhou is still underway.

All of the patients were infected with the highly transmissible variant that was first found in India, Deputy Mayor Li said.

According to Zhang, the new variant's R0, which measures the number of people a sick person can infect, ranged between 5 and 6 when the outbreak started, compared with previous variants' R0 of 2-3. As disease control steps were implemented, the variant's R0 dropped to 4.19 on May 30, indicating the effectiveness of the measures, Zhang said.

The variant's contagious power is alarming, according to Cai, who said the only contact between Guo and Song was their presence in the same restaurant for breakfast, although they were several meters apart.

As the virus spreads, its viral load hasn't shown a significant decline, indicating that the virus is much stronger than it was in 2020, Cai said.

Many of the patients in the latest outbreak showed no clear symptoms or didn't feel anything even though their lungs were already infected, Cai said. This makes it more difficult to detect the virus among the public because the previous practice of screening potential patients based on body temperature is no longer useful, he said.

Since Guangzhou started mass nucleic acid testing on May 26, all of the city's 11 districts have announced plans to test all residents within three days, meaning the city will test nearly 6 million people every day.

"If all the measures can be implemented effectively, the effects will show after 14 days" of the virus incubation period, said Yang Zhicong, an official at the Guangzhou CDC.