How Ant grew into an elephant-sized behemoth 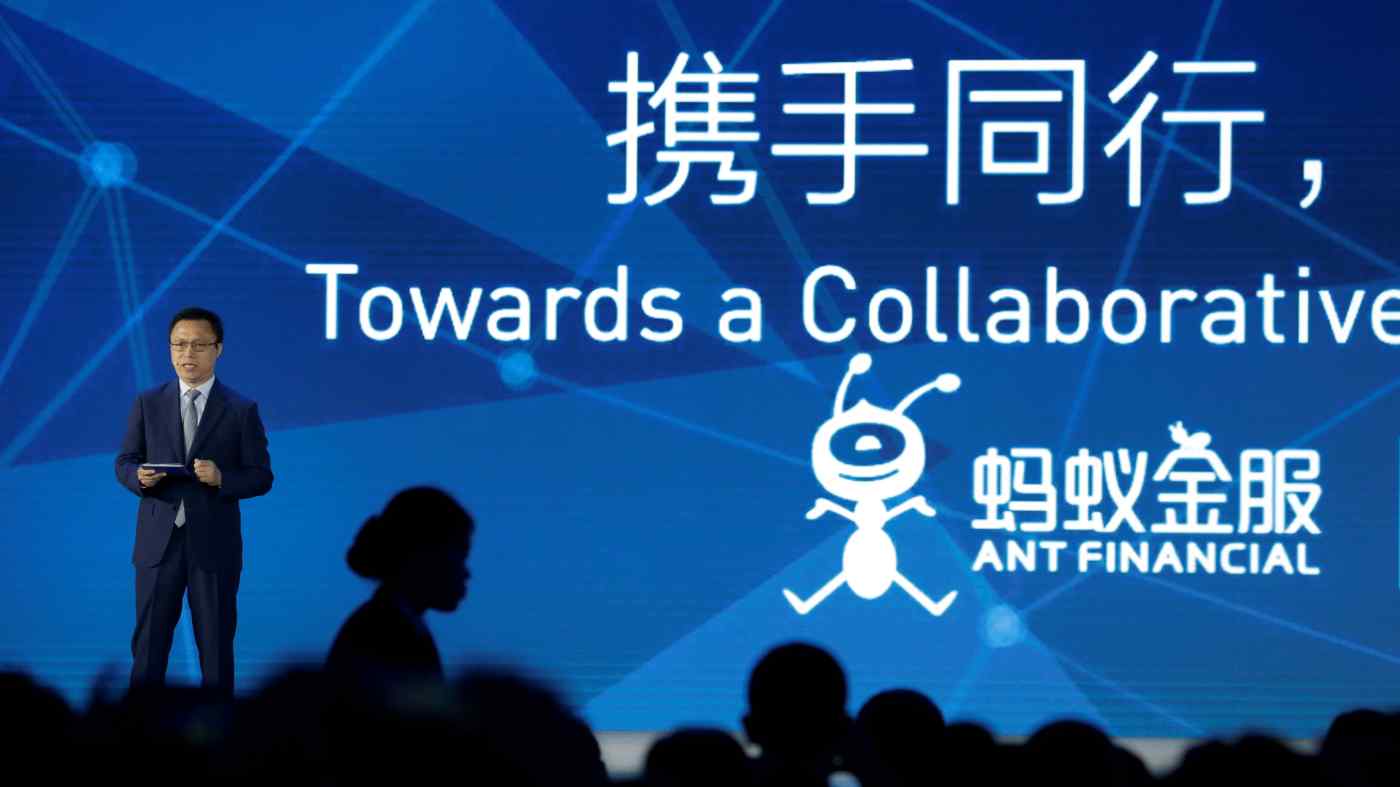 It was a long wait for investors before Ant Group, the Chinese fintech giant affiliated with Alibaba Group Holding, announced its plan last month to go public, kicking off one of the world's most anticipated share sales.

With a valuation of roughly $200 billion, Ant, the parent of payment provider Alipay, is the world's most valuable tech startup. Its planned dual listing in Hong Kong and on Shanghai's high-tech STAR Market could be the biggest initial public offering in the world this year. The debut is expected to give a powerful boost to both markets at a time when the global outlook is clouded by the COVID-19 pandemic.

At the same time, the company's growing influence has brought Ant under frequent regulatory scrutiny. In less than two decades, Ant and other rising fintech companies have brought profound changes in China's financial industry, spurring regulatory changes. Its sprawling business reach, massive access to customer data and fast-evolving technology have raised regulators' concerns over risks related to transparency, breaches of privacy and market monopoly. Caixin has learned that regulators are weighing whether Alipay and archrival Tencent Holdings' WeChat Pay should be spun off for antitrust reasons.

According to the company's website, Ant divides its business into four segments: digital finance, insurance, international business and intelligent technology. Through Alipay, Ant controls a huge amount of digital traffic, which powers its online financial services for individual customers as well as data and technology support for corporate clients.

Having established its dominance in China, Ant has set its sights globally. By investing in local digital wallet businesses such as India's Paytm, Ant has secured access to more than 2 billion customers globally, or a quarter of the world's population.

The size of Ant's financial businesses exceeds that of some of the major banks in China, while the company's technology influence is also expanding. Since 2017, Ant has been promoting its technology services such as blockchain encryption, artificial intelligence, security, Internet of Things and computing to boost its status as a financial technology provider for merchants and financial institutions. In 2018, Ant launched a platform to offer financial technology. More than 40 paid products have been launched so far, according to the company website.

Shortly after Ant revealed its IPO plan in July, the company launched a new blockchain product known as AntChain, moving a step forward in the application of its cutting-edge technology.

In June, Ant adopted its new name to replace the previous Ant Financial Services Group in a move to further promote its character as a tech company rather a financial service provider, analysts said. The company has been downplaying its financial identity since 2017, they said.

Financial services are still the backbone of Ant's business and will remain its main revenue source in the foreseeable future, analysts said. Payment, credit, wealth management and insurance are the major profit sources for Ant, although the company is stepping up efforts to seek new growth from technology services and international business.

There is no doubt that Alipay is the engine driving Ant's growth and its skyrocketing valuation. Started 17 years ago to solve payment challenges facing traders on Alibaba's Taobao marketplace, it was designed as a Chinese answer to PayPal. Now the number of active users on Alipay is more than three times that of PayPal, which is valued at $200 billion.

Alipay has remained a front-runner in China's fintech sector, leading almost every step of new business development, from quick payment to online wealth management to credit scoring. That helped it cultivate a large number of users, analysts said. Data as of September 2019 showed that about 80% of Alipay's users tap more than three of its five types of financial services while 40% use all of them.

But Alipay is not unbeatable. Since 2014, the rapid rise of Tencent's WeChat Pay has posed a significant threat to Alipay. In 2019, Alipay handled 630 million transactions a day on average while WeChat Pay did 1.51 billion. However, the average transaction amount on WeChat Pay is much smaller than on Alipay, company data showed.

Since 2018, the two companies have formed a duopoly in China's third-party payment market. Although Alipay remains dominant, WeChat Pay has secured a larger share of mobile payment services for offline retailers.

But analysts said Alipay may catch up, thanks to aggressive investment by Alibaba and Ant in physical retailers over the past few years.

Since 2015, Ant has doubled down on local services by acquiring a controlling stake in food delivery site Ele.me together with Alibaba. Ele.me was later merged with Koubei, the local service platform Alibaba acquired in 2006, to form a new local services business unit.

In 2017, Ant again partnered with Alibaba to acquire bike-sharing service HelloBike to counter heated competition from WeChat Pay, which partnered with ride-hailing giant Didi Chuxing to win new users. In 2018, Alibaba launched its own brick-and-mortar market chain, Hema, while upgrading its online grocery services, expanding the reach of Alipay in online and offline retail.

As it expands its service options, Ant has also strengthened its role as a technology provider, targeting institutional clients with products backed by its cloud, base, blockchain and other technologies.

Financial institutions are interested in services backed by Alipay's digital traffic and user database, which can help them obtain new customers and control risks, analysts said. But whether the technology-upgrading products provided by Ant can fit most traditional banks remains a question, as "fintech companies often can't understand the real needs of banks," an executive of a small bank said.

For Ant to expand its role as a technology provider, the most promising products will be based on its databases and platform, such as credit scoring products and the AntChain blockchain technology, said Xiao Ran at software consultancy ThoughtWorks.

Despite Alipay's crucial role in Ant's business landscape, it is difficult to generate profits from payment services. Caixin has learned that Ant's payment business alone is still in the red, reflecting heavy spending on technology and customer subsidies.

Ant has yet to release detailed financials, but Caixin calculations based on Alibaba's financial reports showed that Ant's pretax profit for the first three quarters of 2019 was 11.6 billion yuan, following a net loss of 1.9 billion yuan in 2018 and a net profit of 13.2 billion yuan in 2017. A major part of Ant's profits are generated by its online credit services.

Ant launched the consumer loan business Huabei in 2014, offering credit to shoppers on Alibaba's e-commerce platforms. Jiebei, a microloan provider, debuted in 2015. At the end of 2018, Jiebei posted a net profit of 3.5 billion yuan, and Huabei, 370 million yuan, the latest available data showed.

The two services were hit by a regulatory clampdown in 2018, amid a broader campaign to contain risks in the microloan industry, which was plagued by excess leverage and bad-loan risks. Since then, Ant reshuffled its credit businesses and shifted Jiebei and Huabei to intermediary platforms that help users get bank loans. As of the end of June 2019, Ant had partnered with 400 banks to jointly offer loans.

Eric Jing, Ant's chairman, in a March speech said a total of 1.7 trillion yuan of loans were issued through Ant's platforms in 2019, up 72% year-on-year.

But the bank-tech firm partnership in loan issuance is also surrounded by lingering concerns. Critics say such arrangements allow banks to overly rely on tech platforms for risk control. In July, the China Banking and Insurance Regulatory Commission, or CBIRC, issued guidelines to regulate the joint loan business between banks and tech companies.

Apart from online credit services, Ant's financial services such as online wealth management and insurance also outperformed those of most rivals. According to Citic Securities, mutual fund sales on Ant's platform could reach 100 billion yuan annually. In 2020, Ant's revenue from insurance may surge to 1 billion yuan from last year's 240 million yuan, Citic said.

There have been many clashes between Ant and regulators. In 2014, Ant and WeChat Pay became targets in a regulatory clampdown on the fledgling quick-code payment service. In 2017, the Yu'E Bao money market fund was placed under scrutiny, putting the brakes on its freewheeling growth. The same year, Ant was listed as one of five companies involved in a pilot program the central bank launched to better regulate sprawling financial holding companies. In 2019, new rules were issued to regulate the way payment providers like Alipay manage clients' funds.

Ant has since grown into a behemoth, posing new challenges to regulators. Money flows freely inside the company's sprawling business chain, falling outside oversight by regulators and banks, an executive of a major bank said.

"Regulators have no control, for both Alipay and WeChat Pay," the bank executive said.

The CBIRC received complaints from banks accusing online consumer credit services like Huabei of offering de facto virtual credit card services that bypass regulations, Caixin has learned. A commission official told Caixin that as a microloan company, Huabei is under the supervision of local regulators instead of the CBIRC. He said regulators should consider improving oversight of such businesses.

"With more than 1 billion users, Ant and Tencent have grown into super online financial service platforms, with mixed businesses that could affect the entire financial system," the CBIRC official said. "But the supervision hasn't caught up."

Concerns over the excessive power of Ant and other fintech giants also stem from their control of a huge volume of private user information. Such concerns intensified especially after the COVID-19 outbreak, during which vast amounts of personal health and travel information were collected for disease-control efforts.

Tightening supervision helps control risk, which is not necessarily bad for big tech companies like Ant, said Wang Xinrui, a lawyer at Beijing-based law firm Anli Partners. With greater capacity to invest in technology and management, a better regulated market could enhance the status of big players, Wang said.