How China stumbled into a painful energy shortage The perfect storm that created China's worst power crunch grew out of surging energy demand amid the post-pandemic recovery and plunging coal supplies due to the government's emission-reduction campaign.

Since late September, many parts of China have suffered severe electricity supply shortages. Local governments imposed power cuts and rationing on industrial users and even residents. The ripple effects disrupted global supply chains as textile, steel and other factories shut down and production plunged.

"I have never seen this in my 20-year career," said a power plant staffer in Northeast China's Liaoning Province, one of the regions experiencing the worst power outages over the past few weeks. "Coal prices have nearly doubled this year." The staffer's plant was losing money on every kilowatt-hour of electricity produced, and it had enough coal to last only two days, the person told Caixin on Sept. 26 as parts of the province were hit by abrupt power cuts.

In Hunan Province, some lighting of building facades and billboards is being turned off during peak hours. On Sept. 22, the Hunan branch of State Grid Co., the country's largest electric utility company, issued a warning that coal inventories in the province were enough for only nine days of power generation. Coal-fired plants account for nearly half of Hunan's electricity.

Coal shortages have become common across China. Data from industry portal cctd.com.cn showed that as of Sept. 27, thermal coal inventories in China's eight most-developed provinces totaled 18.29 million tons, down 30% from a year ago. Storage in many places plunged to the lowest level ever.

A shortfall of coal supply, an export boom and local government efforts to curtail industrial energy consumption and meet carbon-reduction goals have contributed to the recent wave of electricity cuts, which could further drive up costs of industrial production and disrupt the global supply chain, analysts said.

Since the beginning of this year, China's electricity consumption has maintained a growth rate of 10% compared with last year as factories increased production to meet surging demand from abroad. As the first country to rebound from pandemic shutdowns, China has assumed manufacturing orders from other countries that are still struggling to contain the virus. From January to August, China's total export value hit a record 13.56 trillion yuan ($2.1 trillion), up 23.2% year-on-year.

"No one predicted that exports would perform so well," one financial analyst said.

Efforts to rein in industrial overcapacity and stricter safety and environment requirements have slashed China's coal output since 2016. Coal prices skyrocketed amid the widening gap between supply and demand. Between Jan. 4 and Sept. 28, the most-traded thermal coal futures contract on the Zhengzhou Commodity Exchange rose 90% to 1,253 yuan per ton.

The power crunch could worsen as winter falls. China's coal shortfall could amount to 222 million tons in the five months after September, equivalent to 12% of total demand, Sinolink Securities Co. said in a research note.

The situation is further complicated by the national campaign to control energy use and emissions of greenhouse gases to fight climate change. As Beijing aims to top out carbon emissions by 2030, local authorities must meet specific goals to downsize energy consumption -- which many of them have missed so far this year. Some local governments have resorted to drastic measures such as ordering production halts to hit their targets in the third quarter after warnings from Beijing.

This year's power crunch spotlights the challenges facing China on its way to achieving carbon neutrality, analysts say. It highlights the urgent need for the country to transform its economic growth model and reduce reliance on energy-intensive industries.

China has accelerated its expansion of clean energy supplies. According to the China Electricity Council, nonfossil-fuel power generation, including hydropower and nuclear power, will account for 47.3% of the country's installed power capacity by the end of this year, exceeding that of coal-fired power generation for the first time.

But the country still needs to make advances in power storage technologies to adapt to the fluctuating nature of new-energy production, which is prone to the effects of weather, analysts say. Power grids face greater challenges to deal with the wildly uneven supply of power from renewable sources, according to Chen Guoping, deputy general manager of State Grid.

On Sept. 30, State Grid projected that Liaoning Province would face a maximum power shortage of 5.39 million kW, or 15% of the province's demand during the 2020 winter peak.

Local authorities warned that even with power rationing to industrial users, there are risks of temporary power cuts. 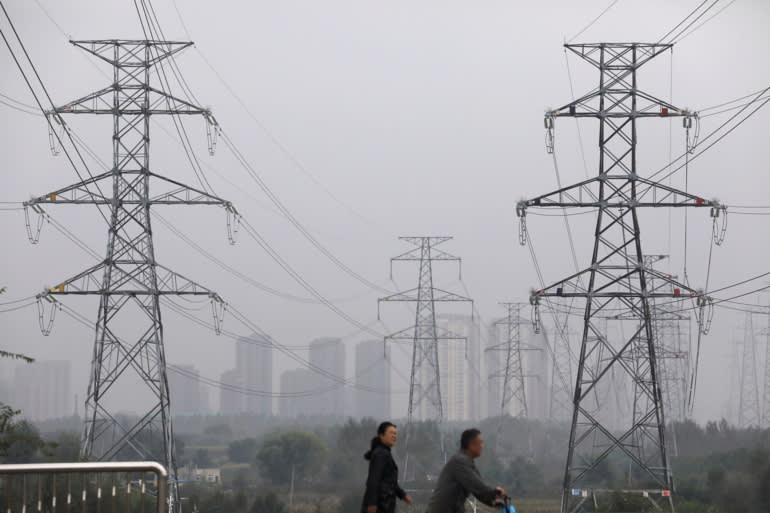 Although it's not the first time grid operators in China have been forced to suspend or ration power supplies to industrial users, electricity cuts for residential use have been rare.

"It affects people's livelihood and is a last-resort measure in a state of emergency," one State Grid employee said.

The southern part of the country also felt the power squeeze. In manufacturing hub Guangdong, the power supply shortfall reached 10% as the province's energy demand rose to a record 141 million kW in late September, an 11% jump from last year's peak.

Several southern provinces, including Guangdong, Guangxi and Yunnan, have launched rounds of power rationing this year.

In Zhejiang, China's largest textile-producing province, 161 textile and dying businesses were ordered to immediately halt production from Sept. 21 until the end of the month. The order was later eased slightly, and some companies were allowed to resume operations. Nevertheless, some small manufacturers were seriously hit by the order and were forced to sell assets for survival.

"There was no buffer room," a local textile industry expert said. "When the order came, the textiles were already in the dye vats and would become waste."

Beijing aims by 2025 to reduce national energy consumption per unit of GDP by 13.5% from 2020 while cutting carbon emissions by 18%. An August notice by the National Development and Reform Commission (NDRC) showed that about two-thirds of provincial-level regions missed their emission-reduction targets in the first half of 2021.

In late September, Zhejiang's energy bureau said the province is determined to replace some energy-intensive industries with new businesses. The eight industries with the greatest demands for energy, including textile and dyeing, account for 43% of the province's power consumption but contribute only 13% of economic output, according to the bureau.

Zhejiang's textile manufacturers enjoyed a spike in overseas orders this year as production remained largely halted in India and Southeast Asia because of the pandemic. Many companies quickly expanded production capacity to accommodate the rising orders, one industry expert said.

But profit margins in the industry have become thinner, squeezed by soaring material and shipping costs. In the first eight months, China's textile companies posted combined revenue of 1.59 trillion yuan, up 14% from a year ago. But their profit grew only 2.3% to 64 million yuan. Operating costs surged 15% to 1.41 trillion yuan, according to the National Bureau of Statistics.

With high energy consumption and little profit margin, China's competitive edge in textiles will keep shrinking, and the industry will continue relocating to Southeast Asia, said Wu Xinyang, an analyst at CSC Financial.

China's energy-control ambitions will also affect its steel industry, the world's largest in terms of output since 1996. According to China International Capital Corp., the 19 provinces blacklisted by the NDRC for failing to fulfill energy-control targets account for 53% of the country's total steel output.

In Jiangsu, steel mills were hit by the toughest production-halt orders in September. A company executive told Caixin that his plant was ordered to suspend operations on Sept. 11 for more than two weeks.

"I've never seen a production halt last for so long," the executive said. He predicted that more such orders may come in October.

A manager at the Anshan Iron and Steel Group in Liaoning said the production restrictions will force steel companies to shift to more-advanced products.

"China's steel industry is big but not strong enough," said Zhang Xiaogang, an adviser to the China Metallurgical Industry Planning and Research Institute. Although China has remained the world's largest steel producer for more than two decades, it still relies on imports for some highly sophisticated steel products.

Under the pressure of energy targets and capacity cuts, China's raw steel output declined 13.2% in August to 83.2 million tons.

The central government has taken moves to force local economic transformation. Since June, it has turned down several local authorities' proposals to build new facilities with high energy demand, including a 126 billion yuan coal chemical project in the northwest province of Shaanxi, which was supposed to the largest of its kind in the world.

While China's coal prices are set by the market, power prices are under state control. When prices for coal, natural gas and other fuels surge, electricity prices don't reflect the changes, said Feng Yongsheng, a researcher at the Chinese Academy of Social Sciences.

In Guangdong, a power plant staffer said generators were selling below cost when the coal price reached 1,400 yuan per ton. Thermal coal prices in the Guangzhou port hit 1,550 yuan a ton on Sept. 24, up 310% from a year earlier.

Although China has launched several rounds of restructuring to liberalize the power market since 2015, only 30% of electricity supplies are priced by market forces, the rest being under government control.

But signs of change have emerged as several provinces, including Shanghai, Shandong and Guangdong, have allowed greater fluctuation in local power pricing.

"The best way," he added, "is using the pricing regime to guide market players to follow the state's carbon reduction goals and encourage them to shift business models so that the emission control efforts can be more efficient and match the market needs."