How Chinese fell out of love with marriage 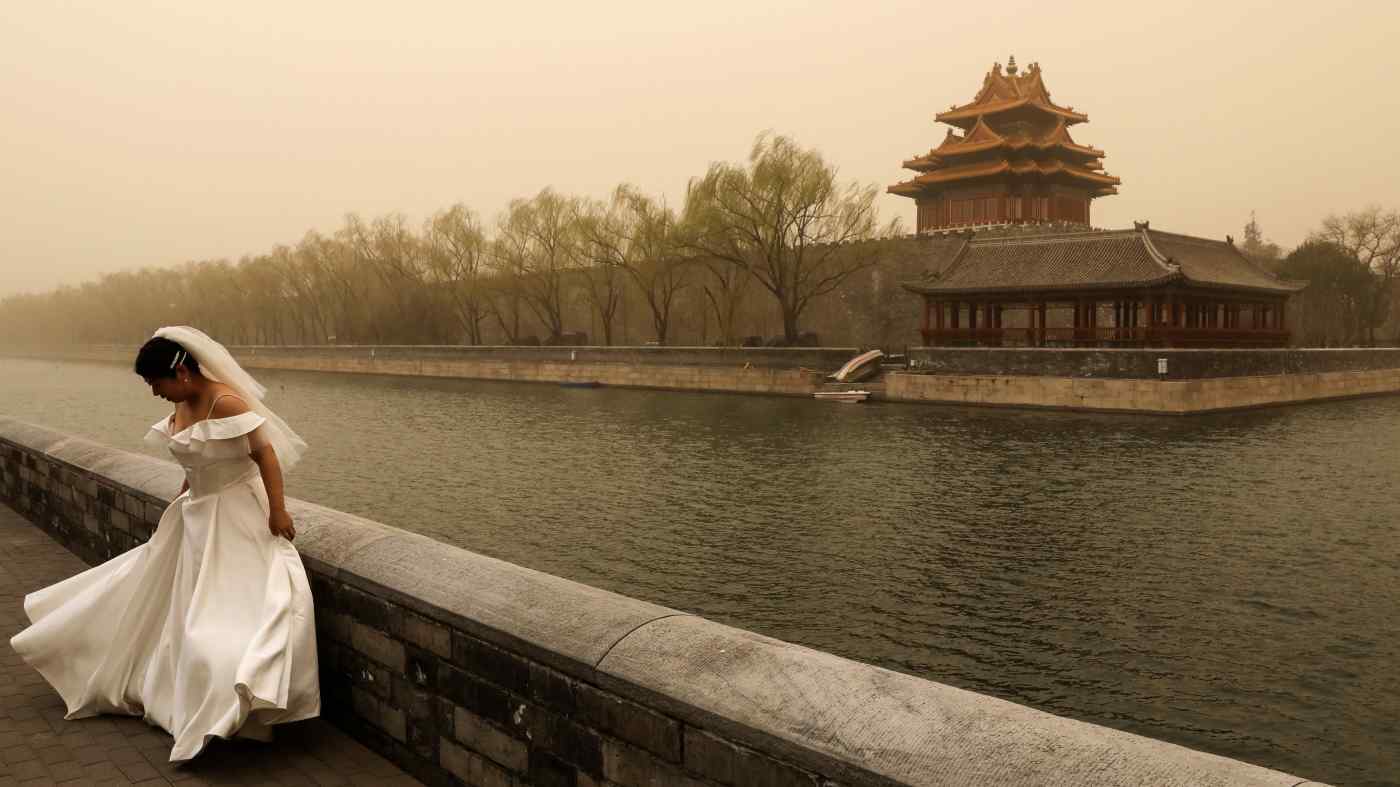 Marriage is the foundation of the Chinese family. For individuals, tying the knot means an emotional connection, a sense of belonging to a family. Furthermore, a long-term harmonious marriage contributes to the stability of society. However, in recent years, the country's divorce rate has been rising.

There has been a change of mindset: Young people are now pursuing independence and see wedlock as a padlock. At the same time, it is more difficult for them to start their own families due to the high costs of getting married and raising children. Some young people don't want to get married, let alone bring a child into this world. China's declining marriage and birth rates, along with an aging population, are reinforcing each other.

Let's take a look at what is behind China's changing attitude toward marriage.

Fewer, later and a greater chance of failure

As the Chinese economy has grown, the country's marriage rate has declined, its divorce rate has risen, and people are waiting until they are older to tie the knot. 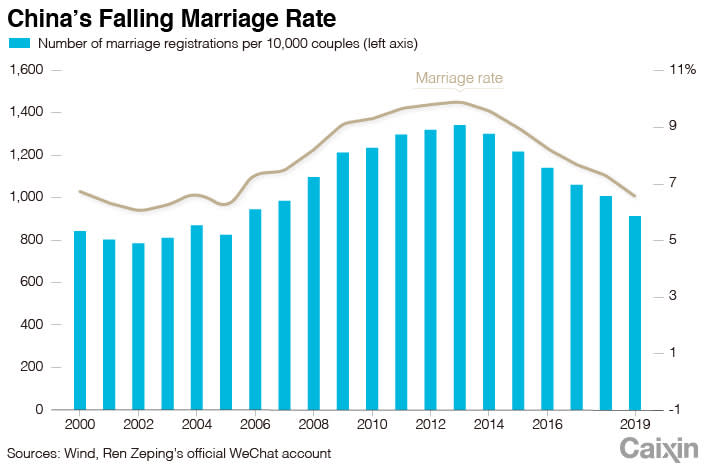 Then there is the age factor. Chinese are increasingly getting married later. The largest age group of people getting married in China is now 25-29, compared with 20-24 in the past, while the number of people over the age of 40 registering for marriage has risen sharply. 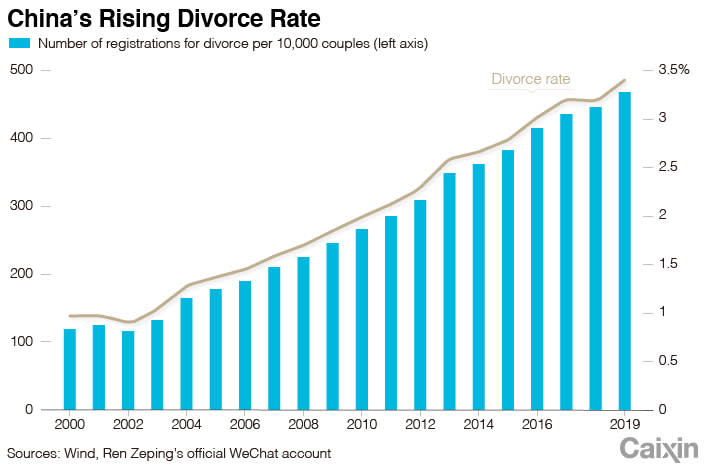 Most parts of China have witnessed a declining marriage rate since 2013. Generally, there is a negative correlation between a region's growth in gross domestic product and marriage rates.

In general, China's more developed regions, like its coastal provinces, have lower marriage rates than the rest of the country. In 2019, Shanghai, Tianjin and the provinces of Zhejiang, Shandong, Guangdong and Fujian had some of the lowest marriage rates in the country, with Shanghai the lowest at 4.1%.

But marriage rates are generally high in China's western and less developed regions.

Migration and aging have also influenced the trend.

The provinces of Liaoning, Shandong, Sichuan, Jiangsu, Zhejiang and Anhui, as well as the municipalities of Shanghai and Chongqing, were the fastest aging regions in China. Regions with slower growth and larger population outflows have higher divorce rates than elsewhere in the country. Married couples in those provinces often have to live and work in different places, which is the main reason why they get divorced.

The rising education level of the population is also playing a role in delaying marriage.

According to data from the National Bureau of Statistics, between 2015 and 2019 the number of postgraduate students surged from 1.59 million to 2.4 million. As more people spent more time getting educated, the average marriage age rose.

As women have gained economic independence, they have become better able to face the adverse consequences of divorce. According to a report by the Justice Big Data Institute, Chinese courts adjudicated more than 1.4 million divorce cases in 2017. Of these cases, 73% were brought by women.

Traditionally, marriage in China is accompanied by a series of events, all of which are costly. Currently, skyrocketing property prices and children's education costs are deterring young people from tying the knot, especially in large cities.

China's housing prices have been rising sharply since 1998, stressing newlyweds and their parents. Between 2004 and 2018, the outstanding value of individual housing loans increased sixteenfold from 1.6 trillion yuan to 25.8 trillion yuan. In 2018, these mortgages accounted for 54% of residents' total loans. Falling birthrates, too many boys

The one-child policy introduced in the late 1970s has created two alarming problems that have hurt China's marriage rate: declining birthrates and a growing gender imbalance.

At present, people aged 25 to 29 make up the largest group of newlyweds, but the number is falling fast.

From 1979 to 2019, China's birthrate plummeted from 17.8% to 10.5%, even though the government relaxed the one-child policy in 2015. Since that policy was introduced, the country has suffered a growing gender imbalance, with men outnumbering women.

According to 2010 China's Census data, the ratio has grown to where there are 13 million more women than men in the generation born in the 2000s.

Just as many Chinese people are delaying marriage, many are also having children later. From 1990 to 2015, the average age of first-time mothers increased from 24.1 to 26.3.

There is a growing trend of people getting married and having children later in life, which has created to growing senior-care burden that could become a serious drag on the country's economy.

China will emerge as one of the countries with the highest financial burden for senior care. Take pensions, for example. From 2015 to 2019, the average growth rate of the country's pension fund revenues was 14.5%, but the same figure for expenditures was about 17.2%. In 2019, there were 16 pension funds in provinces and administrative units that did not bring in enough revenue to cover expenditures. The northeastern province of Heilongjiang has been unable to make ends meet since 2013, and its pension shortfall in 2019 was 43.37 billion yuan. 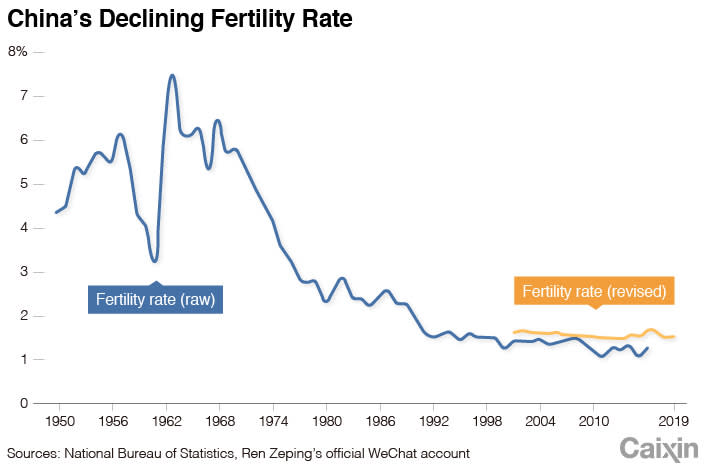 China should take measures to help people who cannot afford to get married and raise children. The government should introduce a comprehensive package of pro-family measures, covering housing, education and health care.

-- Government should continue to follow President Xi Jinping's mantra that homes are for living in, not for speculating on.

-- China should boost spending on public education. The country should try to set up a comprehensive package that covers the cost of raising a child to 18 or the end of their college career. It should include welfare policies for prenatal care, hospital delivery, child care, education and family tax credits, as well as provide direct financial benefits to lower-income people.

-- Government should offer child care services and related benefits to families. The country's nine years of compulsory education should be extended to 12 years.

-- Government should encourage employers to set up child care facilities. At the same time, they can motivate grandparents to take care of grandchildren to take some of the pressure off parents.

-- Most importantly, China should fully liberalize childbearing immediately. The country's third baby boom peaked in 1987. People who were born during the middle to late period of that boom are still under 35 -- their prime childbearing age. Once we miss this opportunity, it will become much costlier to increase the number of births.

We first recommend that China allow all couples to have three children. The incremental reform will ease concerns from conservatives that the country's population will explode. All in all, related steps should be introduced as soon as possible.