How Evergrande's mythmaking created the illusion of strength 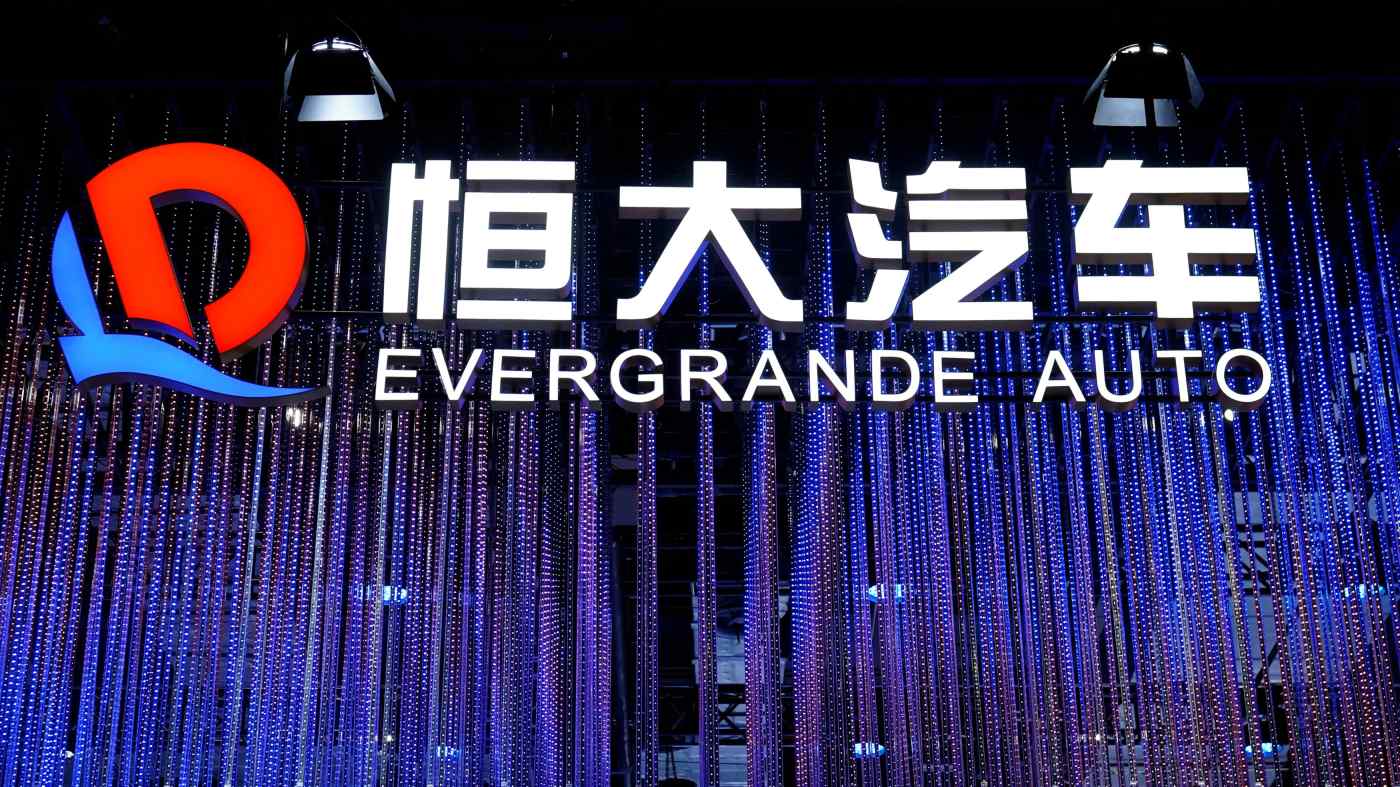 China Evergrande Group, a big property developer teetering on the brink of default, has made many efforts over the years to branch into businesses beyond real estate, but what is more impressive is how it has managed to manipulate the capital markets through the stories it created.

One such story was Evergrande as a new-energy carmaker. The market value of China Evergrande New Energy Vehicle Group (Evergrande Auto), which has yet to sell a single car, once surged to as high as 674.1 billion Hong Kong dollars ($86.6 billion), making it not only the most valuable listed car company in China, but worth twice as much as its parent, Evergrande. Never mind that Evergrande has sold several trillion yuan worth of homes over the past 20 years.

But times have changed. Evergrande Auto is now valued around HK$30 billion, about 4% of its peak. On Tuesday, the company granted 323.72 million share options worth HK$1.26 billion to three directors and around 3,180 employees of the company, according to a filing to the Hong Kong Stock Exchange.

The people who have profited most from Evergrande's corporate mythmaking are its founder, Hui Ka Yan, and his friends. One person in Hui's circle bought 80 million shares in Evergrande Health Industry Group -- Evergrande Auto's predecessor before it was renamed to match its new purpose -- for 30 Hong Kong cents apiece. The friend unloaded his entire stake for HK$50 a share, Caixin has learned. The deal netted the investor more than HK$4 billion.

Encouraged by his runaway success, Hui's friend also participated in Evergrande Auto's private placement, only to find that his luck had changed. He continued to buy shares as their price fell but eventually was forced to sell at a loss.

Evergrande Auto's primary purpose was to raise capital for Evergrande. The parent claimed that it had invested 47.4 billion yuan in its automaking business, but some analysts believe the bulk of that investment came from the market, not Evergrande itself.

"Evergrande Auto had raised 30 billion yuan in two rounds, which means that the company mostly used investors' money instead of its own capital to invest, and it managed to gain a high market value [for the auto company]. Consequently, with its shares [in the auto company] at a high price, it could use them as collateral to raise even more money," one analyst said.

In January 2019, Evergrande Auto's predecessor, Evergrande Health, acquired 51% of National Electric Vehicle Sweden AB (NEVS) for $930 million. Hui, whose name is Xu Jiayin in Mandarin, closed the deal quickly, possibly because he needed to bolster Evergrande's carmaking bona fides after his decision to collaborate with controversy-plagued businessman Jia Yueting on the electric car project Faraday Future (FF) went bad. Without FF, Xu needed something to give Evergrande's identity as a carmaker some substance, and NEVS fit the bill. It worked. After buying a piece of NEVS, Evergrande Health's stock price skyrocketed.

The whipsawing of Evergrande Health's stock price is partly due to the fact that its stock is concentrated in the hands of relatively few shareholders. On Aug. 9, 2020, the company received a warning from Hong Kong's Securities and Futures Commission about high concentration in its shareholding. The SFC's finding suggested that as of Aug. 5, 2020, a group of 18 shareholders held 19.83% of the company's outstanding shares. Together with the 74.99% of issued shares held by the company, that shareholding represented 94.82% of the company's total issued shares. Only 5.18% of Evergrande's issued shares were held by others. 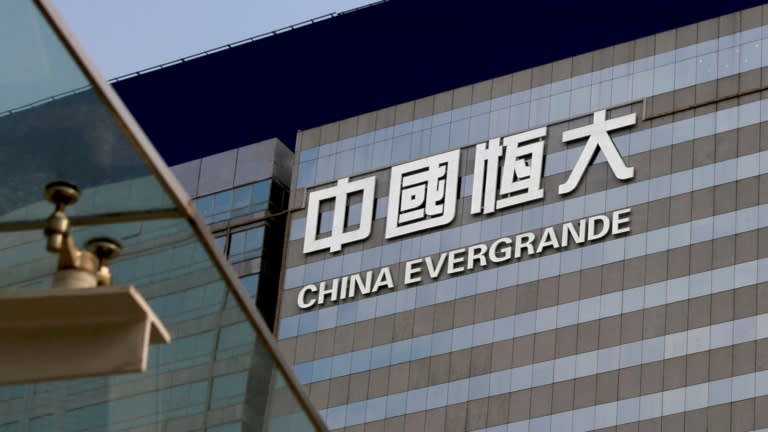 The deal to take a majority stake in Fangchebao Group offers more evidence of Evergrande's financial engineering. Evergrande acquired a 51% equity interest in Fangchebao's more than 40,000 physical stores through a share swap. In this way, Evergrande didn't have to pay cash for the deal, which it lured Fangchebao into by promising an opportunity to go public. As a result, Evergrande gained valuable assets with an investment of roughly 1 billion yuan to cover store renovation and system integration costs. As of the end of 2020, Fangchebao's total assets and net assets reached 4.7 billion and 3.1 billion yuan, respectively.

On March 29 this year, Fangchebao brought in 17 strategic investors and raised a total of HK$16.35 billion. These investors would take a 10% stake in the company upon completion of the deal, driving Fangchebao's prefinancing valuation to HK$163.5 billion. This deal would see a portion of the funds raised through selling existing stock, with the remainder raised by issuing new shares. Fangchebao issued 651 million new shares to investors, while Evergrande planned to sell 651 million existing shares to investors.

In this way Evergrande was able to boost Fangchebao's market value to HK$163.5 billion within a year and pocket HK$8.175 billion from selling its shares in the company.

One question is how Evergrande managed to get investors to buy into the Fangchebao deal?

An institutional investor who participated in the deal said the secret was Evergrande's promise of a buyback. "What we valued was its valuation adjustment mechanism," the investor said. "If Fangchebao failed to go public within a year, Evergrande would buy back our shares at a 15% premium to the prevailing market price. At least, through this mechanism, we could get out money back."

The investor also pointed out that another company under the Evergrande umbrella, Evergrande Property Services Group, was able to go public very quickly, which gave investors confidence that they had a potential exit from the deal that wasn't far off.

A few other investors also believed that Evergrande could push up Fangchebao's valuation, but wanted the company to remain private. "Fangchebao, which sold both cars and houses, was merely a story. But we believed that Evergrande would not fall into major trouble in a year [and would be able to pay back the money]. That was why we invested. However, Fangchebao was a relatively poor-quality company, much worse than Evergrande Property Services. In Fangchebao's case, it was better not to go public. It would be more troublesome after the listing because its poor performance would become public knowledge," one investor said.

Many institutions bought Fangchebao's stock because they believed Evergrande was "too big to fail" -- at least not for another year.

"Last year, when Evergrande converted a strategic investment into ordinary shares, its bond prices plunged," one institutional investor said. "At that time, we speculated that it would not go bankrupt, so we bought more and ended up making a lot of money. In comparison, a while ago, the bond prices of China Fortune Land Development [another major real estate company] also fell significantly, but we didn't buy any because we felt that Ping An [a large shareholder in China Fortune Land] would not come to the rescue."

Is Evergrande's story about growing with the trends, or is it really about grabbing cash to shore up its debt-ridden property unit, Evergrande Real Estate Group?

"In essence, Evergrande lowered the debt ratio on its balance sheet in two areas, its automobile arm and Fangchebao. With the high valuations of those assets, it was able to raise a large amount of money," an industry veteran explained. "Evergrande's ultimate intention was to secure more land under the guise of making cars, and then use that land to make money."

To paraphrase Warren Buffet: It's only when the tide goes out do you discover who has been swimming naked. With the decline of housing prices and the rollout of the "three red lines" policy -- which stipulates a 70% cap on a developer's liabilities-to-assets ratio, a 100% cap on its net-debt-to-equity ratio, and cash to cover short-term borrowing -- dazzling "financial skills" are no longer the panacea for Evergrande's mounting operating costs. Evergrande, once China's leading property giant, is drowning in debt.

Xu's personal assets have also been quietly changing. Recently, the hilltop mansion where he lives in Hong Kong has been transferred to new ownership.

Evergrande appeared to be generous to its investors. From 2011 to 2020, it paid a dividend every year. The total amount disbursed exceeds 114.2 billion yuan, with the dividend payout ratio maintained at 50%, much higher than that of other Chinese real estate giants.

But to whom were these generous dividends paid? As of June 2021, Hui, his spouse Ding Yumei, and their relatives held 76.7% of Evergrande's 13.248 billion publicly traded shares. In other words, 53 billion yuan of the 69 billion yuan that Evergrande has paid in dividends since it listed ended up in the pockets of Hui and his family.