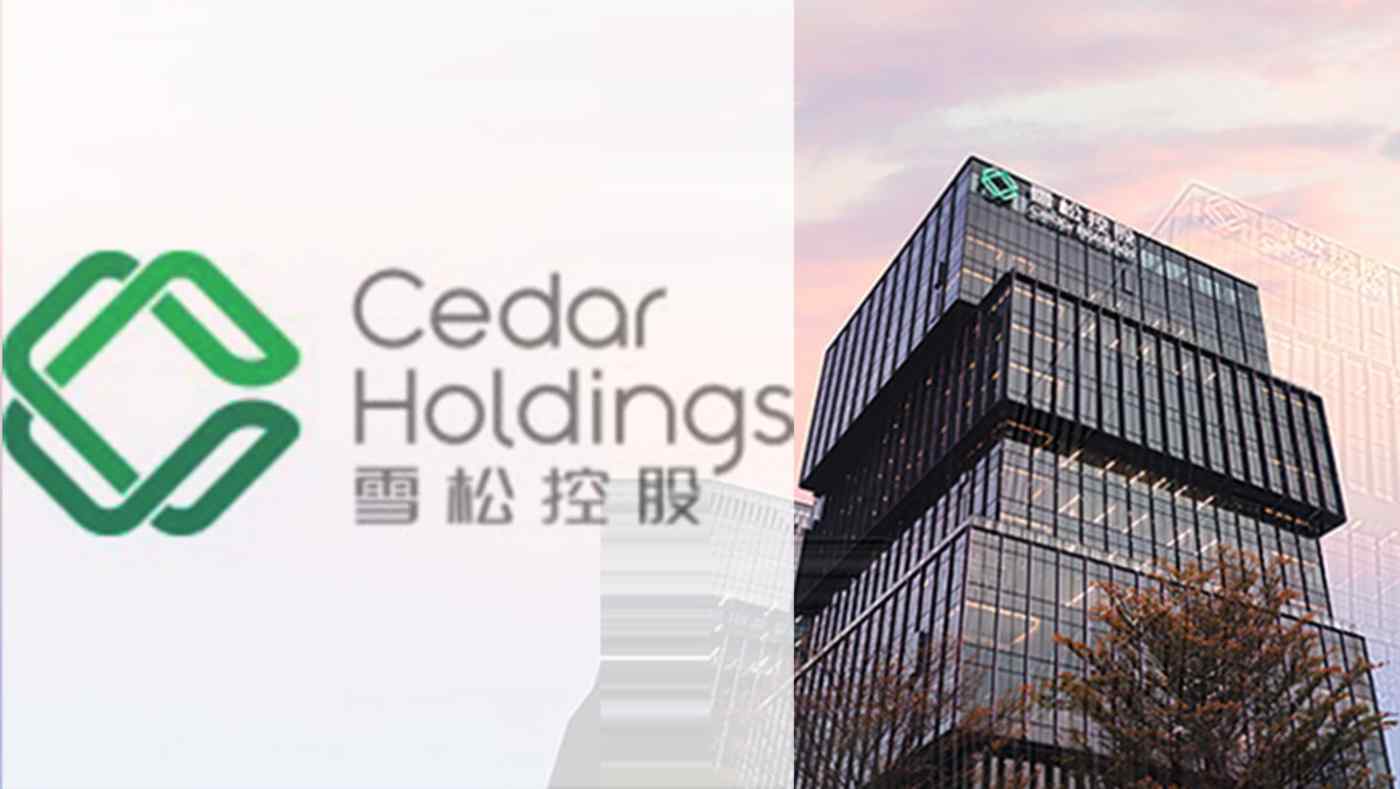 Since April 2020, Cedar has delayed redemption of matured WMPs but still managed to pay interest. But starting in January this year, the company could not even pay overdue interest. (Screenshot from Cedar Holdings website)
WANG JING, LUO GUOPING and HAN WEI, CaixinFebruary 22, 2022 23:35 JST | China
CopyCopied

Investors who poured billions of dollars into products backed by Cedar Holdings Group were betting on the commodity giant's financial strength as a Fortune Global 500 company. But as Cedar repeatedly missed payment obligations, they realized that the multibillion dollar colossus might just be an illusion.

About 8,000 individual investors holding 20 billion yuan ($3.15 billion) of wealth management products (WMPs) backed by Cedar -- including some sold overseas -- are in limbo as the company's finances worsen. Cedar also has 2 billion yuan of overdue payments on trust products, investors said.

Since April 2020, Cedar has delayed redemption of matured WMPs but still managed to pay interest. But starting in January this year, the company could not even pay overdue interest, several investors told Caixin.

The private conglomerate founded by billionaire Zhang Jin has raised concerns at the Shenzhen stock exchange, where two of its units are traded. Authorities in the Huangpu district in Guangzhou, where Cedar is registered, formed a special team with officials from law enforcement and financial regulators to probe the WMP repayment crisis, Caixin learned.

At least two Guangzhou state-owned enterprises have loaned billions of yuan to Cedar. Caixin's investigation of public records showed a massive trading web linking a number of Cedar-related companies in Shanghai and Guangzhou, including joint ventures with state companies. Caixin discovered that state companies' investments in Cedar may have amounted to 20 billion yuan.

Hong Kong-based Zeta Capital, which marketed some Cedar-backed investment products outside China, filed suits against Cedar in Hong Kong and Shenzhen. Cedar and affiliates have about $50 million of outstanding privately offered investment products sold overseas, according to a Cedar executive.

"Cedar lives on borrowing. It wears a gorgeous robe and is huge, but it's all just an illusion," a company source said.

Zhang, 51, engaged in commodity trading in Shenzhen early in 2011 using fake deals to back commercial bills, one person familiar with Zhang said. After 2015, Zhang shifted his business to Guangzhou, the person said. No investigation of Zhang has been publicly disclosed.

A fellow Shenzhen University student of Tencent Holdings founder Pony Ma, Zhang has an undergraduate degree in finance. He said he made his first fortune from financial market investments. He later tapped into property development and venture capital investment.

Zhang ranked 87th on the 2021 list of the top 500 Chinese billionaires published by China's New Fortune magazine, with total assets of 44.8 billion yuan.

The basis of Cedar's so-called supply chain business is actually a range of dodgy financing deals that use fake trade flows to inflate revenue and attract financing, a former Cedar employee said. Cedar's businesses span real estate, commodity trading and finance. The company became a Fortune Global 500 company in 2018 after reporting $32.7 billion of revenue for 2017. It ranked 296th in 2020 and 359th last year.

The underlying assets of Cedar's WMPs are mainly accounts receivable between trading companies linked to Cedar, which provides payment guarantees for the products, according to investment contracts seen by Caixin. But many of the companies are just shells in a sprawling Cedar supply chain with ambiguous trade flows among one another, a Caixin investigation found.

Cedar built its business based on soaring trade volumes, which helped it win backing from governments and investors. Incorporated in 2015 in Guangzhou, Cedar set off its rapid expansion in 2016 with revenue surging more than threefold in a year to 157 billion yuan, ranking at the top of all private companies in Guangzhou.

It is not rare for smaller traders to tout unmaterialized deals with large partners to shore up business and win financial backing, but it is rare that a company can leverage such an operation to become a Fortune Global 500 company, the former employee said. Since 2018, many of Cedar's supply chain executives have quit over concerns about risky business practices, he said.

High-profile examples of using fake trade deals to fuel aggressive business expansions include CEFC China Energy and Guangdong Zhenrong Energy, both of which collapsed due to debt crises that revealed the illegal businesses.

On Feb. 19, Cedar's Shenzhen-traded unit Cedar Development disclosed a 1.83 billion yuan reduction of its 2021 revenue. The company said that included 1.8 billion yuan from its supply chain business and 35 million yuan from office disposal and other businesses.

Since the second half of 2021, Cedar has made redemption commitments seven times for WMPs it guaranteed but none have materialized, investors said. In December, Cedar submitted a report to local authorities pledging to repay all overdue WMPs by June 2023 and providing a detailed payment plan. But on Jan. 30, the company sent an apology letter to investors, saying it could not pay as promised.

"There are so many products from Cedar," one investor said. "Many investors bought whatever their sales managers sold. Many can't tell whether what they bought were trust products, privately offered products or debt financing products backed by accounts receivable."

"We suspected [the products'] underlying assets are fake, otherwise it won't be possible that so many companies have had repayment troubles at the same time since April," one investor said.

More than 20 contracts seen by Caixin showed that the products' underlying assets were debt financing products backed by accounts receivable of small and micro traders. Cedar provided the ultimate guarantee for the products. The products were registered with local financial asset exchanges and sold to public investors by Cedar-backed online and offline platforms.

Such practices break rules, as products on local financial asset exchanges are not allowed to be sold to public investors. But violations widely exist despite years of crackdowns, a person close to regulators said.

One WMP investment document seen by Caixin showed that the investment was backed by accounts receivable of Qihui Industrial Investment for electrolytic copper sales to Yinpan New Material Industry (Jiangsu). The seller and buyer transferred ownership of the goods stocked in the same warehouse, without delivery.

Qihui and Yinpan are familiar names to investors buying exploded WMPs from Cedar. In 2020, Qihui registered 2 billion yuan of WMPs to be sold on a Cedar-backed platform, public records showed.

Qihui has two individual shareholders and registered capital of 2 billion yuan, a business registration record showed. The company has changed registration addresses four times, including one that corresponds to a plot of farmland, investors said after visits to the locations.

Qihui's current registration address in an office building is shared by four other companies appearing in Cedar's collapsed WMPs.

"The companies only use the address for registration without anyone coming to work," a manager of the building told Caixin on Feb. 10.

Documents presented by investors showed that many companies backing Cedar's WMPs share the same address or phone number in business registrations, including more than 10 companies in Shanghai, Chengdu, Guangzhou and Shenzhen.

Commodity supply chain management, including commodity trade and storage, is Cedar's largest revenue source, public information showed. The segment contributed more than 90% of the company's total revenue since 2016 with sales topping 192 billion yuan in 2020. But the gross profit margin of the business was only 0.95% in 2020.

Cedar Commodities claimed to be the largest nonferrous metals trader in Southern China. A company executive told Caixin that its business also expanded into steel, coal, coke and petrochemicals.

But adding up its copper production and trade volume with partners based on public records yields totals far less than the 2 million to 3 million tons of annual sales it published.

"In terms of trade, I personally believe the [figure] was inflated by about 80%," one former Cedar commodity business executive said.

People familiar with Cedar have questioned the company's massive trade flows since 2020.

"Several companies registered in Guangzhou and several others in Shanghai formed a closed loop of trade flow," meaning goods were traded among Cedar affiliates in several transactions to boost sales figures, a person close to the company told Caixin in late 2020.

Some state companies in Guangzhou also got into Cedar's shell game, according to the person.

"Doing trade with state companies can get more credit endorsement when using the accounts receivable to raise funds," a business insider said. "State companies also have the demand to boost revenue and earn some money from the transactions."

Most of the goods traded by Cedar did not belong to Cedar, a person with knowledge of the matter said. The goods in warehouses belonged to state companies that sold them to Cedar and then bought them back after multiple rounds of transactions, the person said.

All transactions took place only on paper as the ownership of goods changed hands, sources said. The goods could be sold hundreds of times in days without leaving a warehouse, boosting sales figures for the companies involved.

The purpose was to raise funds from banks, trusts and WMPs, a person close to Cedar said.

Guangzhou City Construction and Science City have provided huge amounts of loans without any collateral to Cedar, a person with knowledge of the situation said. State companies in Guangzhou have invested about 20 billion yuan in Cedar, the person said.

Since its repayment troubles first emerged in April 2021, Cedar has sought to sell some of its assets to local state companies.

Public records showed that in the second half of 2021, Cedar divested its stakes in two copper smelters and three property projects to Guangzhou City Construction and Science City.

Zhang insists that Cedar has enough assets to cover its debts. During a Feb. 9 meeting at the company's Guangzhou headquarters, WMP sales managers and investors demanded that he take personal responsibility for the overdue WMP payments. Zhang refused to pledge his own assets but agreed to set aside certain Cedar assets, including several plots of land, its stake in brokerage firm Kaiyuan Securities and 2 billion yuan of receivables as a guarantee, investors said.

WMP investors said they doubted the value of the assets Zheng promised as guarantees, as Cedar pledged a large part of its stakes in subsidiaries for loans. Investors said they hope the Guangzhou government will send a working group to Cedar to monitor repayment progress.

Investors in Cedar-linked trust products also face risks. A preliminary study found that Cedar International Trust has nearly 10 billion yuan of problematic assets, including those that are overdue and some that haven't matured, a person with knowledge of the matter said. Cedar acquired the trust firm in 2019 from embattled Tomorrow Holdings in hopes of making it a major financing platform.

"The land plots are the only assets left for Cedar, and they are far less valuable than Zhang Jin said," a Guangzhou state company executive said. "It is impossible to cover the WMP repayments."