How a perfect storm created the global chip shortage 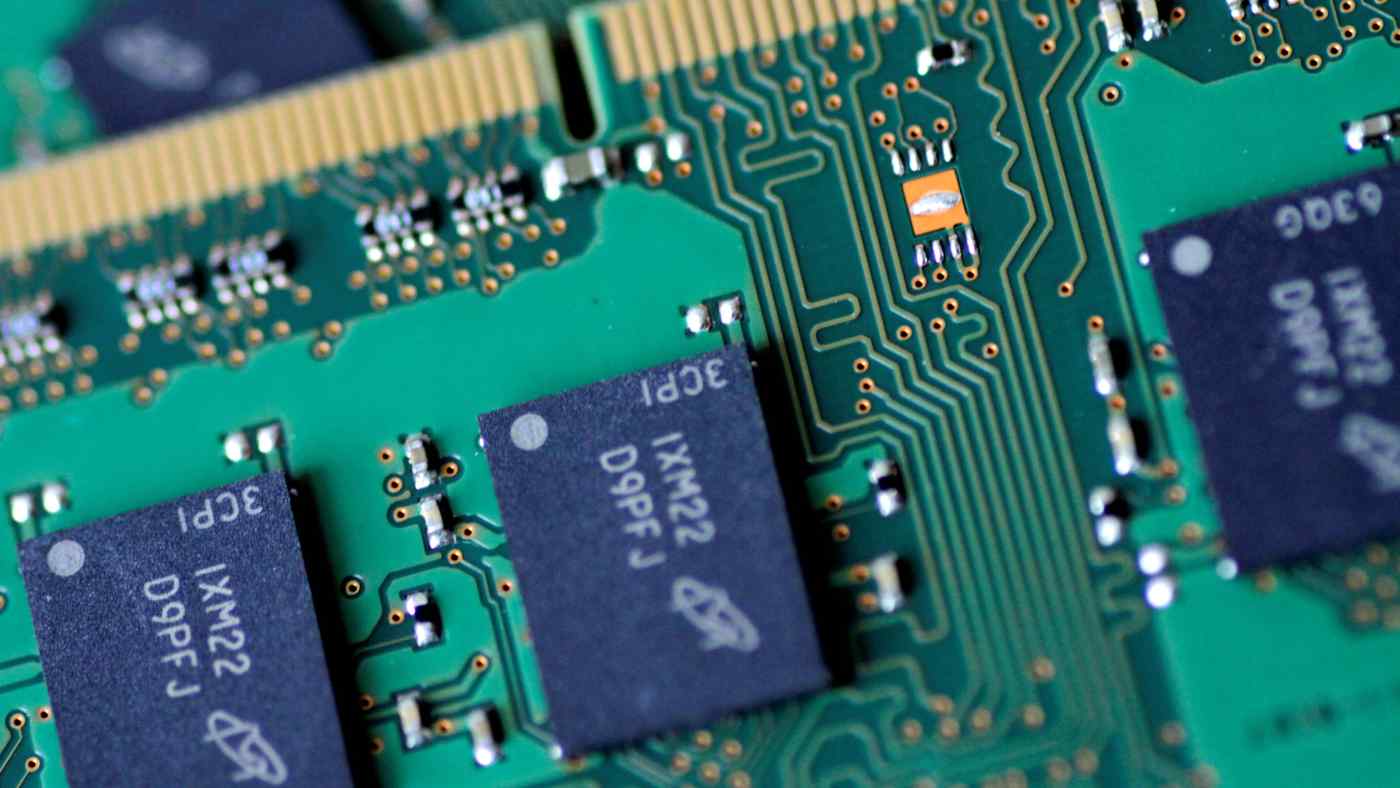 A chip shortage that has squeezed global automakers since late last year offered a snapshot of how the COVID-19 pandemic and geopolitical uncertainties have distorted supply chains in the highly globalized semiconductor industry.

The question is: Will it lead to a reshaping of the industry's landscape?

That is a multibillion-dollar question involving massive investment flows and potentially sweeping economic and geopolitical consequences. As technology has advanced, semiconductors have come to dominate not only the auto industry but also almost every aspect of consumer goods manufacturing, as the tiny devices are the brains for products ranging from computers to mobile phones to toothbrushes.

Global leaders have taken note of the shortage, as concerns mount over the risks of foreign supplies. The U.S. and Europe have begged for investment to empower domestic semiconductor industries in hopes of reducing reliance on East Asian suppliers. Meanwhile, China has embarked on its own plan to expand chipmaking capacity in response to U.S. technology curbs. In China, automakers such as SAIC Volkswagen Automotive and Chang'an Automobile Group have set up special teams led by top managers to find supplies of semiconductors.

"No matter how expensive, they'll buy what they can get," one auto industry analyst said.

Some experts estimated that Chinese automakers face a 10% to 20% shortfall in supplies of the microprocessors that control engines, transmissions, emission controls, automated driving and other increasingly tech-heavy systems.

The China Association of Automobile Manufacturers predicted earlier that automakers will be hit by worse shortages in the second quarter but see supplies improving in the fourth quarter. However, it recently changed tact with a more pessimistic message, saying the shortage is likely to drag into the first quarter of 2022.

Unlike previous supply shortages, the current one is lasting much longer and with broader impacts, said Meng Pu, chairman of chipmaking giant Qualcomm China. "The reason behind it is the growth of demand outpacing supply capacity and the industry's misjudgment of demand."

The pandemic triggered the global chip shortage. Discouraged by plunging sales amid disruptions in the first quarter of 2020, manufacturers dramatically slashed business projections and semiconductor orders. The stronger-than-expected recovery in the second half of last year left manufacturers and integrated circuit suppliers unprepared, as production failed to catch up with surging demand.

Adding to that was escalating U.S.-China trade frictions that threatened Chinese access to advanced chips. U.S. sanctions on Huawei Technologies, one of the world's largest smartphone makers, led to a major shift in the global mobile industry and upset the balance between chip demand and supply, experts said.

Technological advances and the rollout of 5G wireless services mean demand for semiconductors will continue to rise, leaving manufacturers struggling to catch up. Chip requirements for 5G devices will increase by 40% to 80% compared with the 4G era, said Feng Jinfeng of the Shanghai Integrated Circuit Industry Association.

It will take time for the industry to rebalance, but the question is how much time, experts wonder. One of the biggest uncertainties is geopolitics. Apart from the mismatch of demand and supply, the shortage reflects the effect of political uncertainties on business confidence and strategic decision-making, they said. 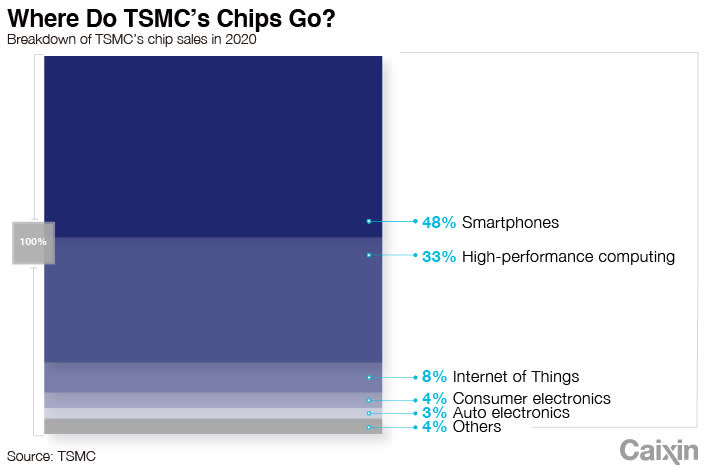 The auto industry was hit hardest by the chip shortage. Chang'an, one of the country's largest automakers, recorded an integrated circuit shortfall of almost 30% at some point in the first quarter, meaning about one-third of the company's orders could not be delivered, an industry analyst said. First-quarter deliveries fell by nearly 80,000 units amid the shortage, the analyst said.

Globally, automakers cut production by nearly 1 million vehicles during the first quarter for lack of chips, according to IHS Markit.

The troubles reflect industrywide miscalculations, experts said. Following the broad sales slump in early 2020, automakers lowered sales projections and cut orders for semiconductors. Automakers usually have small chip inventories for the sake of cost control. But as sales rebounded in the second half, they found it difficult to obtain chips as semiconductor producers prioritized shipments to consumer electronics producers that offered greater profit margins.

According to IHS Markit, the delivery cycle for microcontroller units for vehicles has been extended from the previous 12 weeks to 26 weeks. Certain devices take as long as 38 weeks.

Manufacturers of personal computers, tablets and game consoles have also felt the pressure. Apple said in April that it expected second-quarter sales to be $3 billion to $4 billion less than if there were no supply issues.

Tightened U.S. sanctions on Huawei in the past year shut the Chinese tech giant out of key chip supplies. Huawei accelerated device purchases to build up inventories before the sanctions took effect on Sept. 15. The move encouraged other Chinese phone makers including Xiaomi and OPPO to increase semiconductor purchases in hopes of winning market share from Huawei's crippled mobile business. The buying spree further worsened the shortage.

According to Cinda Securities, major phone makers planned to increase production capacity this year by a combined 10.8% from last year.

Goldman Sachs estimated that about 169 industries in the U.S. have been affected by the shortage and would suffer 1% to 3% cost increases for semiconductor purchases.

Surging demand pushed up global semiconductor industry revenue by 10.4% to $466.2 billion in 2020, according to Gartner.

The supply shortfall makes production capacity the top priority of chip companies and may limit the industry's push for innovation while hurting startups with outstanding design capacity, one industry source said. Many in the chipmaking industry said they expect a major industry revamp in late 2021 or early 2022 that may lead to the failure of many small companies, one industry analyst said. 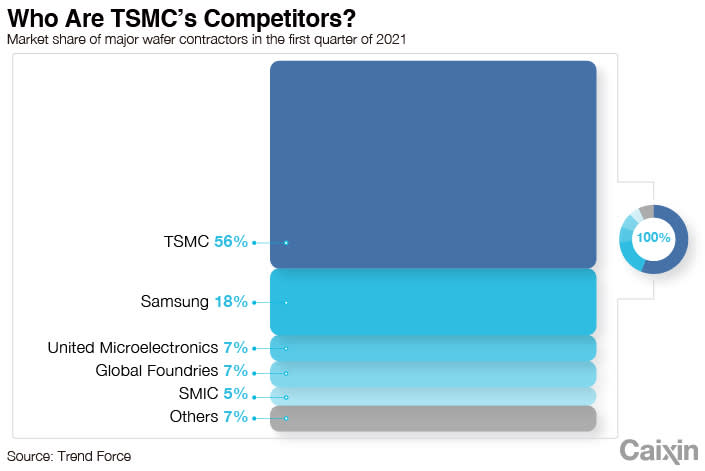 Over the past three decades, the semiconductor industry has become highly globalized with a long supply chain spanning multiple continents. The U.S. and Europe mainly rely on contractors in East Asia for chip manufacturing while retaining design duties.

According to Boston Consulting Group, American chipmakers' share of global production capacity declined from 37% in 1990 to 12% in 2020, while those in Europe fell from 44% in 1990 to 9% in 2020. Meanwhile, Taiwan and South Korea have grown into chipmaking giants.

Taiwan's TSMC and South Korea's Samsung Electronics currently have the most advanced technologies to produce 7-nanometer chips, while Intel is still developing its 7-nanometer process. Chinese chipmakers are capable of only 14-nanometer technology. The measurements denote the size of transistors on chips, and smaller means faster and more advanced.

Under the Biden administration's American Jobs Plan, $50 billion of subsidies would support domestic semiconductor research and production. In response, Intel said in early May that it would invest $3.5 billion to renovate its production facilities in New Mexico in addition to $20 billion of investments to build two new wafer plants in Arizona.

European policymakers set out similar initiatives aiming to double the global share of Europe-made integrated circuits in the next decade.

Chinese authorities are using preferential policies to attract leading semiconductor companies such as TSMC and Samsung to build plants in China while offering support to empower domestic chipmakers and expand chip production and technology.

According to Wei Shaojun, a professor at Tsinghua University, the number of chip design companies in China reached 2,218 in 2020, more than twofold growth from 2015.

China's domestic chipmaking capacity still lags behind demand. According to IC Insight, China's integrated circuit market was valued at $143.4 billion in 2020, but only $8.3 billion of production was done domestically.

China's semiconductor industry has ramped up efforts to reduce reliance on U.S. technologies. Caixin learned that Huawei is seeking to expand its chip business beyond design and build its own manufacturing capacity.

"Regardless of whether the sanctions are lifted, [we] will not rely on the U.S. to do things in the future," said an employee at HiSilicon, Huawei's chipmaking unit.

Separate industry sources said a group of Chinese companies has been working on building a 28-nanometer chip production line without American technologies since May 2020. The facility is set to start operation this year, they said. According to the global industry association SEMI, at least 38 12-inch wafer fabrication plants will be built worldwide between 2020 and 2024.

The global semiconductor industry is set for a major capacity expansion. According to the industry association SEMI, at least 38 12-inch wafer fabrication plants will be built worldwide between 2020 and 2024 -- more than half of them on the Chinese mainland and Taiwan. By 2024, global production capacity of 12-inch wafers will reach 7.2 million units a month, 30% higher than in 2019.

The industry may change profoundly with the capacity expansion, experts say. The Chinese mainland is expected to become the biggest chip producer after Taiwan and South Korea, with 12-inch wafer capacity accounting for 20% of the global total by 2024. By then, the market share of Japan will be 12% and the U.S. 10%, experts predict.

But China still faces challenges in developing advanced electronic devices, especially amid U.S. high-tech curbs. Morris Chang, founder and former chairman of TSMC, said it will take at least five years for the mainland to compete with Taiwan and South Korea in advanced chipmaking. A U.S. semiconductor expert said it will take at least two years for China to achieve complete self-reliance in 40-nanometer semiconductor production and five years for 28-nanometer technology, as the country's capability in lithography still lags behind.

Government support is set to expand China's chip manufacturing capacity. Boston Consulting Group forecast last year that the global share of China-made semiconductors will rise to 24% by 2030, nearly double from 2020.

Despite countries' push for self-reliance, experts warned that pursuing completely independent chip supplies is unrealistic. The industry is so complicated and globalized that it can maintain innovation only through collaboration in the highly specialized world supply chain, said Goodrich of the Semiconductor Industry Association.