'Sponge City' infrastructure upgrades may not be enough to handle flooding The evening of July 20 left a devastating memory for many people in Zhengzhou, in China's central Henan Province, as record rainfall inundated the city.

Torrential rain turned streets into rivers, flooding subways and road tunnels just as commuters were making their way home. More than 500 people were stranded in subway carriages when floodwaters burst into the metro system. They struggled for hours amid thinning air and rising water before they were rescued, but some did not make it out alive.

Drivers were forced to abandon vehicles on swamped roads, and many residents could only watch as their properties were washed away. Subsequent power and water cuts left millions in limbo.

Described by authorities as a "once-in-a-millennium" event, the deadly downpour killed 63 people, with five still missing, according to official data released Sunday. At least a dozen of the victims were killed on a major subway line. Several others were found dead in tunnels along a key expressway running through the city.

As the flooding recedes and the city of 12.6 million struggles to get back on its feet, people are asking why the city was so vulnerable to flooding. The Zhengzhou disaster also sounded alarms for many Chinese megacities over whether their infrastructure can cope in the face of increasingly extreme weather. A man holding a baby wades through a flooded road following heavy rainfall in Zhengzhou, China on July 22.    © Reuters

For the past five years, Zhengzhou has been part of a national pilot program to build so-called sponge cities with enhanced flood prevention and control capabilities. Under a plan issued in 2018, Zhengzhou was to invest 53.5 billion yuan ($8.3 billion) in flood-control infrastructure.

The Zhengzhou disaster spurred discussion of whether the sponge city program is sufficient to enable large Chinese cities to manage severe flooding. Huang Guoru, a professor at the South China University of Technology, said the Zhengzhou rainstorm was so heavy it significantly exceeded the flood-control capacity of any Chinese metropolis, even those in the program.

Moreover, evidence is emerging that institutions and employers ignored repeated urgent warnings of excessive flooding on the way, continuing with business as usual.

"I didn't expect that the rare red alert would be largely overlooked," said Ye Qian, a disaster management expert at Beijing Normal University. "It was a big mistake." 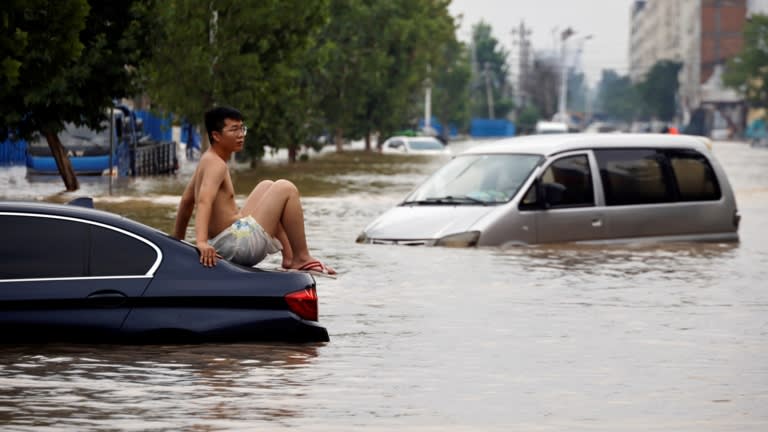 A man sits on a stranded vehicle on a flooded road following heavy rainfall in Zhengzhou, China on July 22.    © Reuters

In addition to paralyzing Zhengzhou's public transport system, the downpour also disrupted electricity and water supplies in most parts of the city. Many residents had difficulty connecting to the internet or receiving cellphone signals.

According to government data, the city relocated 395,989 people as of July 23. The historic flood affected 44,209 hectares of cropland and caused direct economic losses of 65.5 billion yuan ($10 billion).

The Zhengzhou meteorological authorities, on the night of July 19, issued a top-level red alert for the storm, forecasting 100 mm of rainfall over the next three hours.

"Starting with the evening of July 17, the rain kept falling without stopping, and maintained a relatively heavy level," said He Ru, a public servant in Zhengzhou.

But like many others in Zhengzhou, He thought it was "just another rainy season that was slightly more severe." Her employer didn't issue any changes to working schedules, and she decided to go to work as usual on the morning of July 20, although the roads were covered with water in places.

It wasn't until 2 p.m. that He realized the neighborhood was severely flooded and that her car was almost completely submerged. She called for road rescue service and was told that her area was inaccessible.

Chen Xing, another Zhengzhou resident, left for home around 4 p.m. when his company told everyone to leave early as the rain intensified. Chen decided to take subway Line 5 as surface transportation had become difficult. The ride home which normally takes 15 minutes turned into a harrowing trip. Chen and other passengers were trapped underground for hours as floodwaters deluged the subway system. 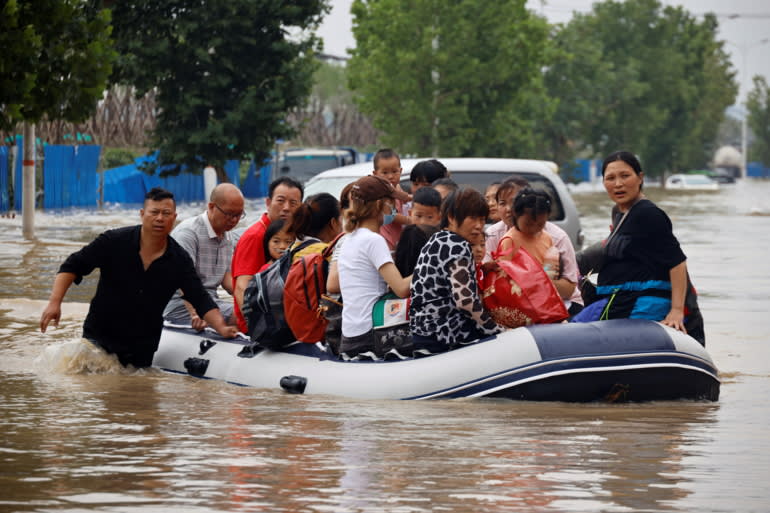 People ride a boat as they make their way through a flooded road following heavy rainfall in Zhengzhou, China on July 22.    © Reuters

Chen said he thought he "might be unable to make it" as he struggled to breathe in the flooded carriage before rescuers arrived. Thirty-year-old Xiao Pengpeng was less lucky. Xiao lost contact with her family around 6:30 p.m., when she became stranded on a train on Line 5. Two days later, Xiao's family found her body at a hospital.

According to official data, more than 500 passengers were evacuated from the subway system July 20. Twelve people were confirmed dead, and five others were injured.

Line 5 is one of the busiest subway lines in Zhengzhou, and the best option for many urban commuters during bad weather. According to the city's railway operator, daily passenger traffic on Line 5 reached 374,200 people on July 20, nearly one-third of the entire subway network's passengers.

City authorities said heavy rainfall swamped a subway carriage parking area near Shakoulu Station on Line 5, where the trains were trapped on July 20. Floodwaters breached defensive barriers around 6 p.m. and rushed underground through the entrance for trains. The whole subway system was suspended 10 minutes later.

One person who participated in the design of Line 5 told Caixin that the railway was designed to handle floods with severity of "once in 50 years," but the July 20 flood exceeded that capacity and overwhelmed the drainage system. The person said the disaster on Line 5 reflected the subway operator's flaws in emergency response.

"With floodwater rushing underground, if the system continued operating for 10 minutes, it would definitely trap trains," the person said.

The newspaper Southern Weekly cited a safety official at the Zhengzhou Metro identified as Zheng Yutang as saying that although the subway company can halt the system when floodwaters enter the tunnel or affect power supply, the official suspension order still requires approval from city authorities. Before the decision came, subway staffers tried desperately to stop the flooding, Zheng said.

The floods disrupted Zhengzhou's public transportation citywide on the evening of July 20 as roads, tunnels and subway stations were inundated. Many people were stranded at transport stations and highways because of the heavy rain, said Li Zhuo, a rescue worker.

All the road tunnels along the Jingguang Expressway filled with water, killing at least two people and swamping more than 100 vehicles. The 25 km thoroughfare is a main road running through Zhengzhou from north to south and a backbone of the city's urban transportation system.

Many residential complexes in Zhengzhou experienced power and water outages, starting late on July 20. According to the city's power distribution company, more than 300 power lines and more than 400 transformers were damaged by the storm, leaving large parts of the city without electricity on the night of July 20. At the First Affiliated Hospital of Zhengzhou University, the largest medical institution in the city, the sudden power outage endangered patients using ventilators. Medical workers had to use manual equipment to help them breathe. 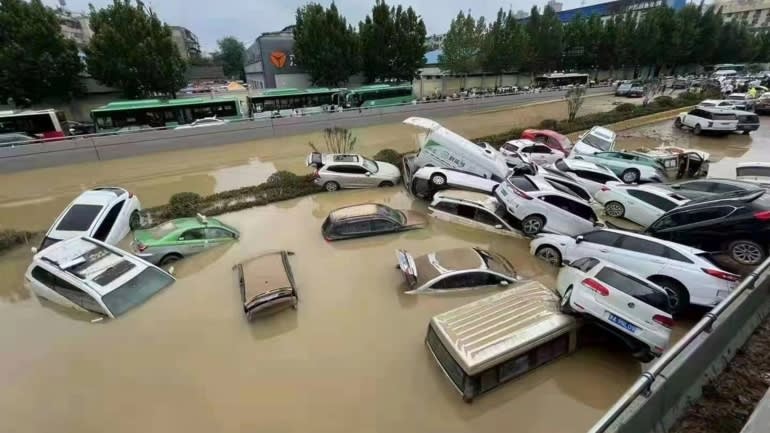 The rainstorm also damaged Zhengzhou's telecommunications infrastructure, affecting tens of millions of people, the Ministry of Industry and Information Technology said on July 21. Internet access in the city was also largely cut off.

As the flood receded, roads reemerged but were riddled with holes. In the Zhongyuan district in central Zhengzhou, 84 road collapses were reported as of July 22. The damage mainly reflected improper repairs during previous renovation work, one government source said.

"As the rain stops, a small collapse can be fixed in two or three days, but some more severe damage will take half a month" to repair, said Ao Mingcheng, a road maintenance official in the Zhongyuan district.

Ye Qian of the Beijing Normal University said the Zhengzhou flood shows how extreme weather can trigger a chain of disasters in rapidly growing cities.

"With interruptions of transportation, power and communication, the natural disaster becomes a series of social problems, which require a coordinated mechanism to deal with," Ye said.

As flooding overwhelmed Zhengzhou's drainage system, questions emerged over the city's years of heavy investment to improve flood control. By 2020, 23.6% of Zhengzhou's urban area should have met national standards for sponge cities, and the share was to increase to 88.5% by 2030, according to the 2018 plan.

The sponge city concept focuses on using urban drainage and ecosystems to retain and recycle as much as 70% of rainfall. Such a design would be appropriate cities with mild weather changes, Ye said. But many cities in northern China have unbalanced precipitation throughout the year, and if heavy rainfall comes over a short time, the sponge city system would be unable to handle it, Ye said.

A key part of sponge city construction is building an intensive underground sewage network. But in Zhengzhou, many of the areas worst-hit in the July 20 flood were in the downtown area, where the sewage network has been well developed, according to South China University of Technology's Huang, who attributed the problems to outdated equipment and lack of maintenance.

The sponge city program alone cannot deal with all urban rainstorms; only a comprehensive system, including subsystems such as runoff controls and storm sewers, can solve problems such as waterlogging, Huang said.

Warnings were issued before the rainstorm struck. Zhengzhou's meteorological authorities sent five red alerts warning of severe rainstorm risks late on July 19 and July 20. A red alert, the highest-level warning, indicates potential risks for flooding and landslides that require disaster prevention measures. Schools and businesses should be closed, and gatherings halted under a red alert.

At 5 p.m. on July 20, the city's flood control authority raised its emergency response level to the highest level. But by then, the torrential rain had gone on for nearly an hour, and millions in the city were already on their way home.

A Guangdong provincial emergency management official told Caixin that a red alert for extreme weather provides a reference for the public and government agencies, but no enforcement mechanism. Government departments can make their own decisions on how to respond based on the alert, and requirements vary across regions.

"It is a question of balance between safety and costs," the official said.