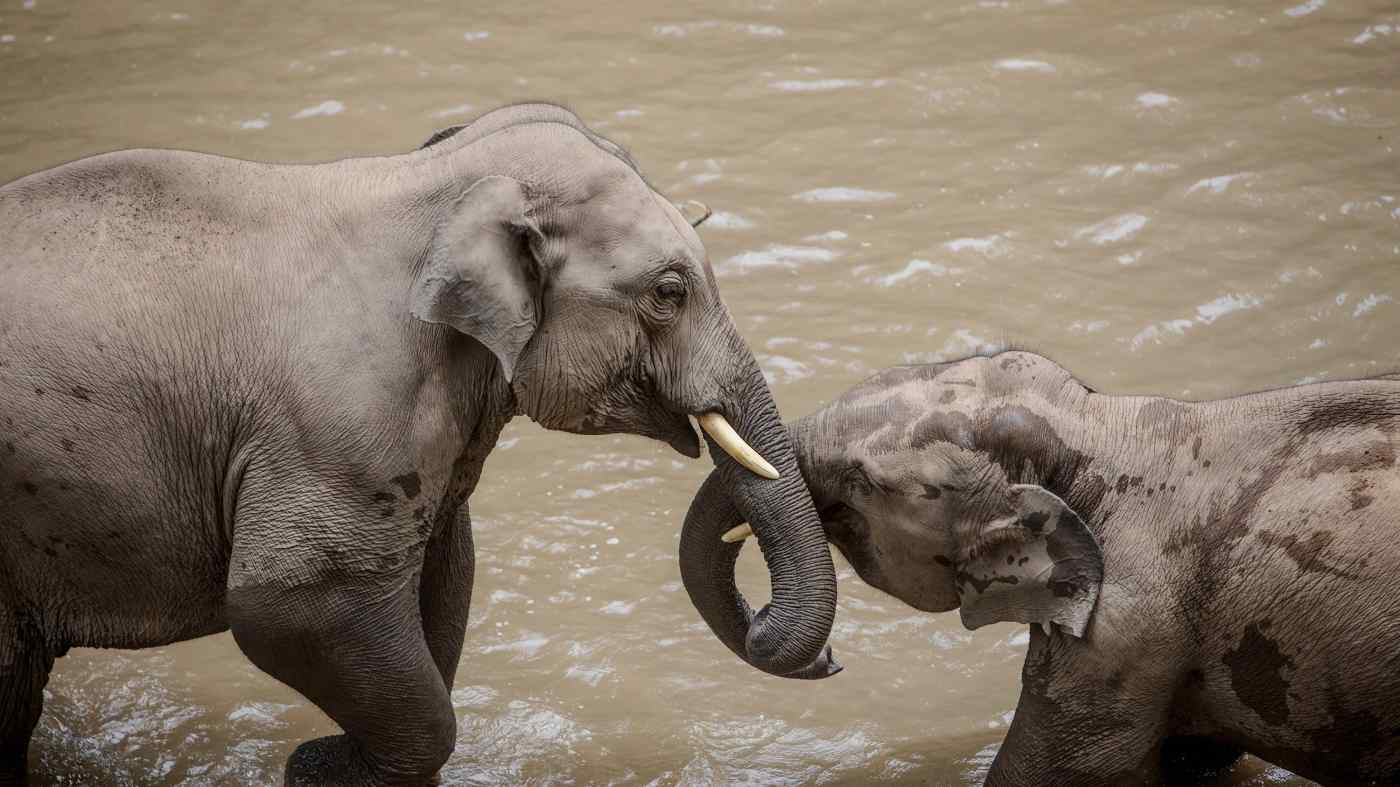 Wild elephants bathe in a river in Xishuangbanna. The animals tend to avoid humans but will attack if threatened.   © AP
KANG JIA and HAN WEI, CaixinOctober 20, 2020 21:47 JST | China
CopyCopied

Xishuangbanna, the southernmost prefecture in China's Yunnan Province, is known as a safe haven for wild Asian elephants where hundreds of the giant animals live in the sprawling tropical rainforests.

But balancing modern human activities with protection of wildlife has never been easy. For some people in Xishuangbanna, coexistence with the wild elephants is becoming more and more challenging, and sometimes even fatal.

Li Guoshui, 49, a rubber tapper, lost his wife in a surprise encounter with a group of wild elephants and barely survived himself. The couple ran into the animals on a mountain road outside their village in early May as they drove a motorcycle home after work. Possibly spooked by the vehicle, the elephants attacked. Li's wife was killed immediately, and Li fell down the mountain and wasn't rescued by fellow villagers until four days later.

The Asian elephant is the largest land animal in Asia and was listed in 1986 as an endangered species by the International Union for Conservation of Nature. With an average height of 3.7-4.1 meters, adult Asian elephants weigh 3-5 tons. Although most wild elephants try to avoid humans, they will attack if threatened.

Over the past couple of decades, the level of threat has increased for both humans and elephants. Deforestation due to expansion of rubber tree plantations and farmland, as well as conservation-driven changes to the rainforests, have dramatically reduced food sources for elephants. At the same time, the size of the elephant population in Yunnan has almost doubled to 300 from 180 in the 1980s. This has forced many of the giant animals out of nature reserves and into close encounters with villages and villagers.

"Humans and elephants are increasingly mixing, and conflict is inevitable," said Li Zhongyuan, a wildlife protection officer in Xishuangbanna.

Prospects for a speedy and satisfactory de-escalation of the human-elephant tensions are bleak, as the solutions that have been advanced stir controversy and may threaten other unintended consequences. A herd of elephants crosses a rural road in Xishuangbanna on April 7. (Photo by Zheng Xuan/State-Owned Asian Elephant Research Center)

According to the local forest authority, human deaths and injuries from wild elephant attacks in Xishuangbanna have soared since 2016. In 2019 alone, 12 people were killed by wild elephants in the prefecture, compared with 33 over the two decades through 2010. So far in 2020, seven people have died in clashes with wild elephants. Li's wife was the fourth person killed by the same herd of elephants.

Including other wild elephant reserves, all of Yunnan Province recorded 32 deaths and 159 injuries caused by elephant attacks between 2011 and 2017, provincial government data shows.

In addition to casualties, wild elephants have also caused huge economic losses for local people by destroying property and crops. Data from the Yunnan provincial forest bureau shows that wild elephants led to an average of 30 million yuan ($4.5 million) of losses to the province every year from 2015 to 2019 based on damage to farmland and disruption of economic activities.

At the same time, wild elephants are also suffering increasing threats from humans. According to Chen Mingyong, professor at Yunnan University, 199 wild elephants were killed because of poaching and human activities damaging their habitat between 1918 and 2005.

"Humans and elephants have entered a state of close combat, and neither side can step back," said Wu Zhaolu, an environmental studies professor at Yunnan University.

According to the county government of Menghan, where Li and his wife were attacked, signs of the presence of wild elephants first appeared in the county of 44,000 people in mid-March, and the giant animals have since damaged many properties in the county.

Yang Zehan, an official of Wenquan village in Menghan, found the badly injured Li in the outskirts of the county. Yan, in his 40s, said it was the first time in his life he had seen wild elephants in the village.

Most villagers in Menghan earn their living from rubber tapping and farming. This year, the presence of wild elephants has stopped many people from entering the forest for rubber, and their crops have been destroyed or eaten by elephants, Yang said.

"With elephants around, nobody dares go into the mountains," said villager Li Yamen. "It means about 200 yuan lost every day, a lot for villagers." According to a local government report, wild elephants have cost the 74 households in Wenquan more than 2 million yuan due to disruption of rubber tapping.

Local official Han Si said that although people are dispatched to monitor the movements of the elephants, it is difficult to accurately track them due to bad weather. In mid-August, a herd of wild elephants visited a small village nearby during the night.

"The elephants killed a barking dog and broke into a neighbor's kitchen for food," said Su Xiaoming, a villager. The animals wandered around the village for nearly an hour, Su said.

Human-elephant conflicts have been reported over about 4,450 sq. kilometers in Xishuangbanna, or 22.3% of its area. Most cases were reported in Menghai County, about 80km west of Menghan. In 2019, six people were killed in Menghai by wild elephants, official data shows.

A Linwu's home is about 2km from central Menghai. Between June and August 2019, a herd of a dozen wild elephants settled gathered outside his village, searching for food and wandering around the village.

"I can see them from my home," A said. "The elephants didn't even return to the forest." 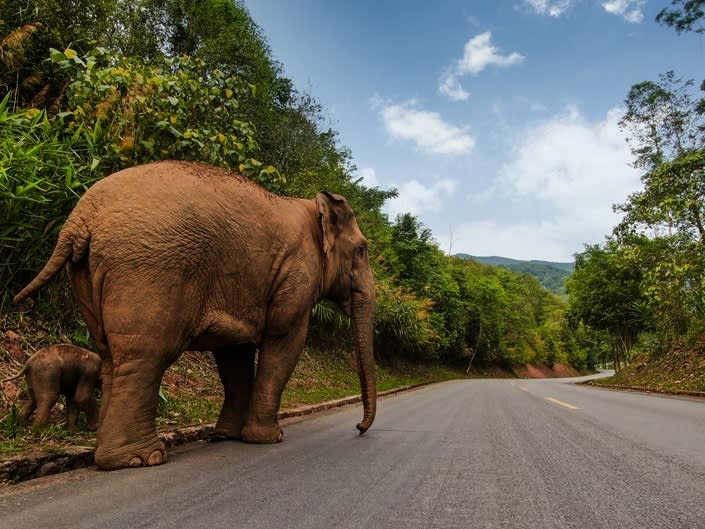 Wildlife protection experts have been tracking the changing behavior of wild elephants in Yunnan.

"In the '80s, killings by wild elephants were very rare as they avoided people and seldom attacked," said Yang Haisheng, an employee of Menghai's wildlife protection station.

Experts said wild elephants' behavior has changed since early 2000s as an increasing number of the animals started moving out of the nature reserves in search of food.

"Elephants have moved further and further away and stayed longer outside the reserves," said Li Zhongyuan, the Xishuangbanna wildlife protection officer. "Their behavior is becoming more and more unpredictable."

Zhao Pingcheng started tracking wild elephants to safeguard fellow villagers in 2010. He said the animals have become bolder over the years about entering human settlements.

"At first, they shunned people and quickly returned to the forest, but now they dare move into the town, and people are scared," Zhao said.

The elephants' changing behavior partly reflects expanding human activities affecting their habitat, experts said. Since the 1980s, the size of forests in Xishuangbanna has continued to decline as more land was developed for farming. Since 1995, wild elephants were recorded migrating beyond their traditional habitat in search of food. Some groups never returned as urbanization blocked their migration paths, experts said.

In the 1990s, farmers started growing rubber trees as the price of rubber rose. A rubber boom in 2013 fueled an expansion of rubber plantation in Yunnan to cover almost all natural forest areas outside the designated reserves, leaving no buffer zone between wildlife habitat and human settlements, Yunnan University's Chen said. This has also reduced the space available for the natural plants that wild elephants eat.

"Every corner outside the nature reserves was planted with rubber trees," the professor said.

A 2017 study of forest changes in southern Yunnan showed that the area of natural forest shrank from 69% of the surveyed regions in 1975 to 58% in 2014. Meanwhile, the size of rubber forests grew more than 23-fold. The expansion of rubber tree plantations eroded the habitat of Asian elephants and made the areas suitable for their habitat more fragmented, forcing the animals to migrate northward, the report found.

In addition to rising human threats from outside the habitat, a changing environment within the nature reserves also drove elephants away, experts said. After years of preservation and restoration efforts, forests inside the reserves thrived and became dominated by tall, broad-leaf trees, which squeeze out the shrubs and grass that are the major food sources for elephants.

Forest coverage of the Xishuangbanna nature reserve rose to 97.2% in 2016 from 93.3% in 1998, according to Wang Qiaoyan, senior engineer at the reserve's research unit.

"People often think high forest coverage ratio is a good thing," Wang said. "It is indeed good for primates and birds but not for Asian elephants, which prefer to live in sparse forest and forest margins."

Reduced food in the reserves forced elephants to move out their habitat, and they quickly learned that farmland and villages provide easy access to food.

According to the Yunnan forest authority, areas with wild elephant activities expanded to 26 townships from 14 in the past 25 years. More than 62% of the wild elephants in Yunnan now live outside the nature reserves.

To control damage from wild elephants, Menghai County in 2019 launched the construction of a special elephant control zone covering 24.3 hectares, which was finished in June. Surrounded by metal railing, the zone includes a pond and plants such as plantain and sugar cane that are favored by elephants. It is designed to lure the animals in and allow them to stay before being sent back to the reserves.

The plan has stirred great controversy. Many wildlife protection experts criticize the practice for violating wild elephants' habits and posing the threat of unexpected results. But the Menghai forest authority defended it as an urgent measure that must be taken to solve the problem and protect local people.

Peng Guoyun, an official of the Menghai forest authority, said the special control zone is a temporary solution and will be improved gradually.

"It is the most efficient way under current conditions," Guo said.

A 2017 study found that about 30% of the Xishuangbanna nature reserve should be suitable for wild elephants. If managed property, the areas can accommodate more than 1,000 wild elephants, or more than three times the herd's present size. But now, only 10% of the area fits elephants' needs, Guo said.

Plans proposed by Guo include using human intervention to control parts of the forest growth and vegetation to supplement elephants' food supply. But the proposals face opposition from some researchers who argue that they might affect other wild animals.

Zhu Hua, a researcher at the Chinese Academy of Sciences, said human intervention will affect the regeneration of the entire rainforest.

"There will definitely be controversy, but there is no perfect solution," Guo said. An increasingly dense forest will not only affect wild elephants but also other endangered species, such as Indian bison and sambar deer, Guo said.

Yunnan University's Wu Zhaolu said the fundamental reason for increasing human-elephant conflict is the rising number of people invading the animals' habitat. The only solution is to withdraw human activity, Wu said.

"We occupied elephants' space for economic development and disturbed them, but now we blame them for the danger," Wu said.