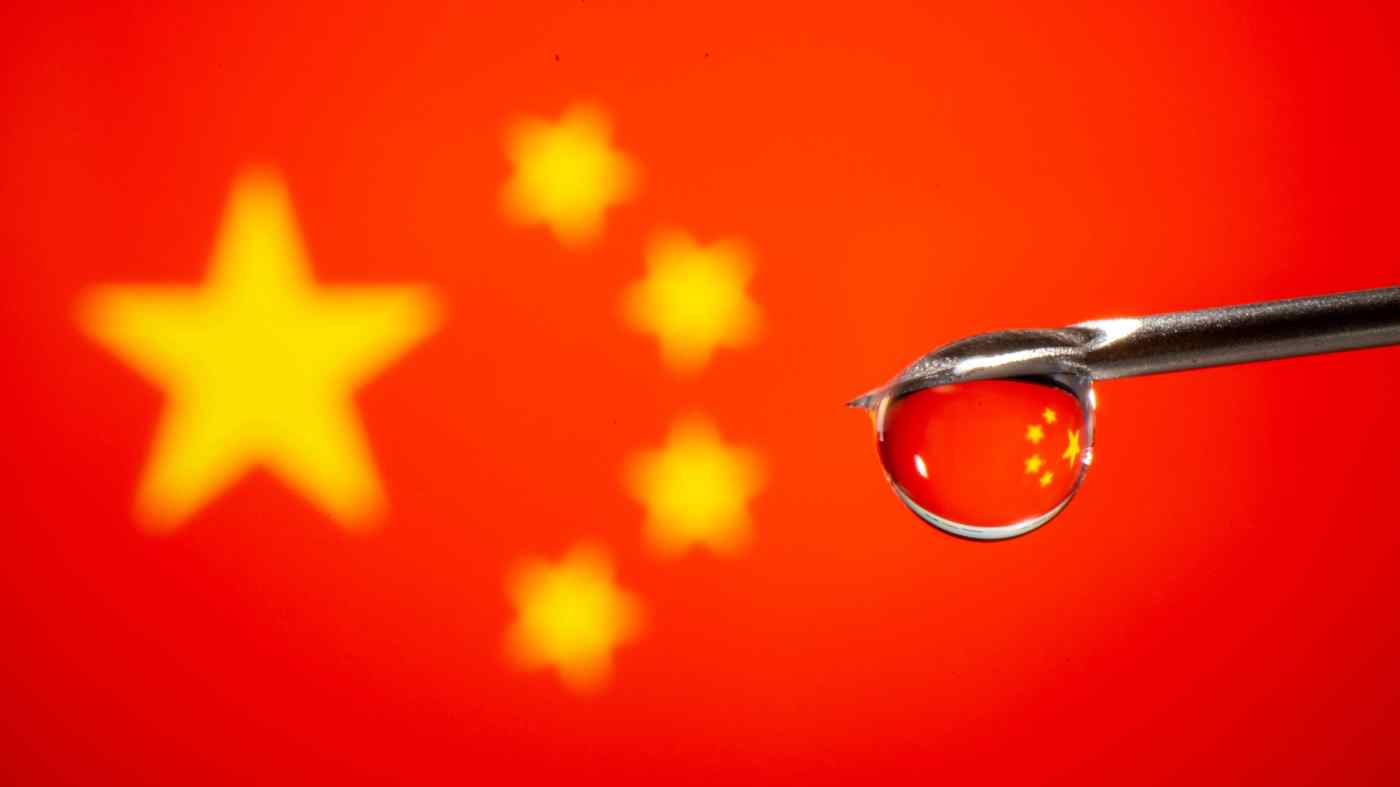 A Brazilian institute revealed that a Chinese vaccine from Sinovac had an efficacy threshold of 50%, but doubts were raised when the company said that vital data had been withheld.   © Reuters
FLYNN MURPHY, CaixinDecember 25, 2020 18:00 JST | China
CopyCopied

China's experimental coronavirus vaccines are on the move. Global procurement data shows that three Chinese companies have inked deals to supply hundreds of millions of vials to the world in bilateral agreements with nations like Indonesia and Brazil.

The flashier mRNA vaccines of Pfizer-BioNTech and Moderna are more adaptable and have produced enviable results, but keeping them cold enough to prevent their delicate strands of genetic material from falling apart in transit is a major challenge.

China's vaccine giants have mostly deployed the more conservative and time-consuming approach of killing the whole coronavirus and administering it to people to prime their immune response to fight off a real-world infection.

These vaccines are easier to transport and potentially manufacture overseas in places without cutting-edge technology. But while they may be more appealing to many nations, concerns over the vaccine-makers' transparency and a lack of detailed trial data seem to have turned some off.

Full results from final phase trials of vaccines by Pfizer, Moderna and the adenovirus vector vaccine produced by AstraZeneca and Oxford University have all been published in peer-reviewed journals for the world to scrutinize.

But China's vaccine companies have only published results from early and mid-stage trials, which are not designed to examine whether they actually prevent people from getting sick from the disease. Some topline results have been revealed by officials and company chiefs, but no Chinese vaccine has yet been approved for domestic use outside of a controversial and expanding emergency program.

Researchers at the Duke University's Global Health Innovation Center in North Carolina have been tracking COVID-19 vaccine commitments made by the world's leading vaccine companies. Their figures show that apart from the nation's commitments to the U.N.-backed vaccine initiative COVAX, three of the four Chinese companies with vaccines in the final phases of trials have committed almost 380 million doses to countries in Latin America, Southeast Asia and the Middle East.

That is just a fraction of the 11.6 billion doses of various that have already been pledged around the world, with the majority concentrated in the U.S., EU, India and the U.K. -- despite their vastly different populations -- as high-income countries hedge their bets. Meanwhile, one model predicts it could take until September 2023 to make enough doses for the whole world.

Researchers at Duke warned that because China, like Russia, controls largely state-owned vaccine development and manufacturing chains, they are "notably less transparent than some other countries about advance purchases for domestic use as well as exports."

This means the commitments made by Chinese companies to foreign countries could be higher than those publicly known, they said.

Early phase trials generally check if a vaccine is safe and provokes an immune response, and can be done on healthy people anywhere. But the true test of a shot is whether it stops people exposed to the virus from actually catching it.

That can be determined in two main ways: using ethically questionable "challenge trials," where scientists deliberately expose inoculated people to the virus; or by inoculating them in a region where the virus is spreading then recording how many fall ill.

China is not known to be carrying out challenge trials, which were planned in the U.K., but appear to have been held up for ethics approval. Victims of the country's success at containing the virus, Chinese vaccine companies have been forced to look to places with uncontrolled spread to test their shots -- an effort that has been fraught with controversy.

Leading the race is Sinovac Biotech, the private life science company that has six other vaccines on the market, according to its website. Sinovac attracted attention in September when CEO Yin Weidong told media that 90% of its employees had been injected with its experimental CoronaVac shot, made from inactivated whole virus and delivered alongside an immune booster, as part of the emergency program.

Public records show Sinovac has pledged to deliver at least 289 million doses of CovonaVac outside China -- mostly to nations that have agreed to test the vaccine. Just over 125 million doses are destined for Indonesia, where President Joko Widodo has pledged to roll out free shots to the nation's 270 million residents. Sixty million more are destined for Chile, 50 million for Turkey and 46 million for Brazil. All four nations are hosting Phase 3 trials of CoronaVac.

Last month, Sinovac published combined Phase 1 and Phase 2 trial data in medical journal The Lancet showing CoronaVac is safe for healthy people to take and sparks an immune response. But it has yet to release data showing if it prevents those inoculated from catching COVID-19.

The picture was clouded when the company's state-owned partner in Indonesia, Bio Farma, said on Dec. 8 that interim data showed CoronaVac was 97% effective, besting Pfizer's 95%. But it quickly withdrew the comment and said the efficacy could not yet be determined, Bloomberg reported. Sinovac told Bloomberg the same day that efficacy data was not yet available.

Some suggested Bio Farma had jumped the gun and may have mixed up efficacy -- a measure of how effective the vaccine is at stopping people contracting the disease -- with CoronaVac's previously reported 97% rate of seroconversion, which shows how many test subjects produce virus-fighting antibodies after inoculation.

The efficacy of Sinovac's vaccine was expected to be revealed on Wednesday by the Sao Paulo-based Butantan Institute, which partnered with the Chinese company for the trial. But doubts were raised when Sinovac told the institute it will withhold detailed data until next month pending review in China, Bloomberg reported. The institute only revealed that the vaccine had passed an efficacy threshold of 50%, which would allow Brazil's health regulator, Anvisa, to approve it.

Dimas Covas, head of the institute, said final results of the trial on 13,000 volunteers were withheld as part of a contractual agreement with Sinovac and to ensure "data consistency" among the company's other ongoing trials.

A spokesman for Sinovac had previously told Bloomberg the company could only disclose efficacy data after they were reviewed by Chinese regulators.

Butantan is reportedly exploring selling the vaccine -- which can be kept at the temperature of a household refrigerator -- to other nations in the region, including Argentina, Uruguay, Peru, Ecuador and Honduras.

Anvisa temporary halted the trial in Brazil last month after a "serious adverse event," putting it at odds with the Butantan Institute. At the time, Covas said it was "impossible" that what happened was related to the vaccine, prompting speculation Sinovac had been drawn into a political dispute between the two frontrunners for the country's next presidential election, Bloomberg reported.

Chinese vaccines have faced other setbacks elsewhere. News last week that Cambodia would acquire 1 million doses from the COVAX initiative -- which was set up to subsidize coronavirus vaccines for almost 100 low-income nations -- was seen by some as a snub to China's vaccine makers.

In August, Chinese Premier Li Keqiang told Mekong countries, including Cambodia, they would be given priority once a China-developed vaccine is ready. This was echoed by Foreign Minister Wang Yi during a visit to Cambodia in October.

However, Cambodian Prime Minister Hun Sen said last week his country would not accept vaccines uncertified by the global health body. "Cambodia is not a dustbin ... and not a place for a vaccine trial," he said. While the comment might rule Cambodia out of trials similar to those taking place in Indonesia and Brazil, the nation could ultimately receive Chinese vaccines if they are certified by COVAX. China joined the $18 billion scheme in October.

State giant Sinopharm, which has two inactivated vaccines close to market -- one produced by a subsidiary in Beijing and one from its Wuhan unit -- has a relatively more modest 70 million doses headed overseas, based on public information. But the shots have high-profile backers: Sheikh Mohammed bin Rashid Al Maktoum, ruler of Dubai, received one from Sinopharm's Beijing Institute of Biological Products on Nov. 3, according to a post on his public Twitter account. Other senior officials there also received the shot, according to local state media.

A glimpse of the data on the vaccine came from advanced trials on 31,000 people that concluded in the United Arab Emirates, which state media in the country reported protected 86% of people inoculated and had no serious safety concerns. Detailed data was not disclosed.

After the announcement, Abu Dhabi officials said that they would start working with local authorities to "resume all activities within two weeks," including economic, tourism and cultural operations.

Sinopharm shots received emergency approval in the UAE in September, and Bahrain in November. In October, Sinopharm Group head Liu Jingzhen told a media conference that its shots were undergoing Phase 3 trials in 10 countries, including Jordan, Peru, Argentina and Egypt.

Meanwhile, CanSino Biologics, which is using a second-generation adenovirus vector technique to deliver its immune-system arousing payload, has pledged to deliver its entire overseas commitment to date -- 20 million shots -- to Indonesia, according to data from Duke.

CanSino, which is using the same approach as the AstraZeneca/Oxford University vaccine, made headlines in March when its vaccine candidate was the first in the world to enter human trials.

This week, all eyes have been on a new strain of the virus that showed up in the U.K and how it might impact the effectiveness of vaccinations.

Experts say the new strain, which U.K. scientists have dubbed B.1.1.7., appears to be more transmissible than previously known strains, but could actually be less harmful. Its existence is unlikely to frustrate current vaccine efforts, three immunologists told Caixin.

"It should still be fully susceptible [to current vaccines]," said Marc Pellegrini, head of infectious disease and immune defense at Australia's Walter and Eliza Hall Institute of Medical Research. But it does raise the specter of a more significant future mutation in the virus that could render current vaccines ineffective.

If that does happen, mRNA vaccines "could be adapted very quickly and very easily" to fight new strains, said Pellegrini. Inactivated vaccines would be more difficult to repurpose, he said. "From the position of being adaptable, the mRNA is superior," he said. "Of course there are caveats about the logistics of transporting it at very cold temperatures."